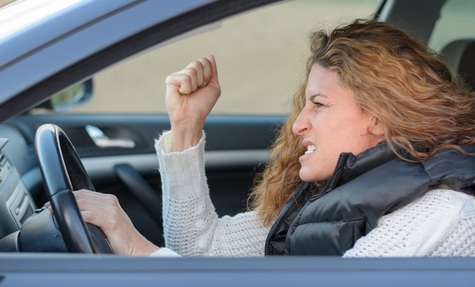 Road rage: There's a time for it, just like there's a time to every purpose under heaven. I've had my share, coming and going, though, when my Dad long ago would emphasize not letting myself get taken advantage of, he made an exception for events on the road. No matter who's in the right or who had the actual right-of-way, it really isn't worth the months of intermittent paperwork and hassle to get the car bashed up.

The problem for me is, as this one comedian went on about one time, those retards poking along ahead of me (at 2 mph over the speed bumps in their 4 by 4's*) and those assholes riding my ass behind me! Haha! Yes, my Dad was right, as I went through a lot of trouble based on one "I'll show you for cutting me off" incident many years ago. When you drive with the limit of bad driver points allowed in your State, and for a while over the limit, you learn to mellow out. "Want to cut me off? Go ahead. Have a nice day!" ... yet still, I'd really like to teach people how to merge.

The problem is the visibility for backing up into the one lane of traffic. The driver is on the vehicle's left side, closer to the car in the direction he would like to see when backing up. Think of the geometry, and you will see that one has to go farther back to get a good sight line. It doesn't help at all that the modern vehicles have wide-ass pillars between doors to contain airbags (I think) and windows that start much higher up. Visibility sucks in the modern crossovers especially. The back-up cameras, something I think is a necessity now, the way these things are built, don't have that wide a view angle for help in backing up from that angled space.

Therefore, you just have to ease out, and hope for the best until you finally get a view past that big pickup or SUV to your left. That was us driving by, probably not more than 20mph just based on common sense. Pedestrians can come out from either side, someone may start backing out, etc. Well, this lady did. I saw the reverse lights on with the brake lights. That's normal, as you have to slowly get to where you can see. However, I was past the point at which I could stop and let her back out, and she kept on moving, too damn quickly and closely. I doubt she was even 4 ft. from me when I beeped the horn 3 times sharply. That did it. It's simply defensive driving.

That's what the horn IS for, as I explained to my son just a second after that. "It's for warning people, not to yell at them that they shouldn't have done that." (Then, he had to bring up "yeah, but what about that time when that guy was on the phone and you honked it when you passed him?" Kid have the darndest memories!)

Well, the lady pulls up next to us at the stop light only 100 yards past, and she was pissed. I really was hoping to just tell her nicely that I wasn't sure if she could see me. Nope, she kept her window up and said something that is not within my lip-reading capabilities. No flip of the bird, mind you, but just anger. Seriously?? I just wanted to make sure I could keep my old vehicle, as anything more that a scratch and the insurance company would tell me "you'll take $1,500, or you'll get nothing!" If the lady had backed up her much newer Subaru** (but none dare call it a station wagon) into us, she would have had months of intermittent hassle, paperwork, and higher premiums. With the number of complicated plastic parts on the new vehicles, minor wrecks are no longer minor. Everything's a big damn deal.

That's the thanks I get - some old lady getting pissed at me for warning her to quit backing up or there'd be a wreck. There really should be a Misanthrope topic key here, rather than just Curmudgeonry.

** Yeah, it's Honda for lesbians, but let me tell you, there were no fantasies going on in my head about THIS lady, me, and a willing lady insurance adjuster.

Greetings Mr. Blanc. I agree with you about the older cars. I not so recently worked on a 1962 Ford Galaxie. It needed quite a bit of electrical work (including the horn) a heater core, the draft tube to pcv valve conversion and a few other things. Very nice car. Much nicer than many of the overpriced, overly complicated new plastic cars.

Mr. Moderator, that's a fun way to parallel park. It's better to ride over that curb than to pinch your tire. Blind side parking a tractor trailer isn't that hard, especially in a parking lot with orange cones. It's a bit harder out in the world where you might hit something. You should check out the third video of the doubles backing into a loading dock. It's not blind side, but backing up doubles is kinda tricky.

☮
MBlanc46
PS You forgot about the G-D- tinted windows on the cars (usually light trucks) on either side of you that make it almost impossible to safely back out of a parking space. And the horn? I almost never use it because if you don’t push the exact spots on the center bit of the steering wheel, it won’t sound. The old horn rings worked fine. So, of course, they eliminated them. Yes, cars today are ever more durable and have ever so many more nifty features—like those backup cameras—than the cars of my youth did, but give me that 1960 Mercury every time.
Moderator
PS: Jimbobia, was that a technique to use only rear-view mirrors, or just HER technique? By bad day, do you mean you (OK, she) sideswiped someone in the blind spot? If the worst you got was flipped off, it's not so bad a day, haha.
Moderator
PS: I saw one video so far, Adam. Blind-side || parking? In a semi? Not agonna happen for me. My method in the truck is to head right in, catch about 8" of curb, and then let that wheel drop back down in the right spot. (That's at a decent enough angle not to scuff it all up.). Never hit a parking meter yet.
Jimbobla
PS One of my (and also my wife's) worst days (sorry again, baby) was trying (key word, trying) to teach her how to merge (fuck yield) into high speed traffic while accelerating upon entering Interstate 55 using rearview mirrors only.
Adam Smith
PS: Good evening...

☮
Moderator
PS: That's pretty good, Alarrmist - it's somewhat location-dependent along with temperment-dependent. I will write more about this in that other post.

I had a car without a working horn for about 5 years. I should have fixed it sooner - when I'd get in a situation, I really missed it.
Moderator
PS: Adam, I'm not thinking of the views in the side rear-view mirrors, as per the semi's. On the right side of the road, one can look at at bigger angle - from straight back toward where the moving cars are coming from - out of whatever glass in one's own car he can (hopefully) look through. If you're on the left side of the road, your head is 2 1/2 to 3 1/2 feet closer to the car next to you that you often can't see through and usually can't see over.

I've never driven anything near the size of a tractor-trailer. That would be not a good idea for me. I've only backed a boat up a few times, but I hope to be doing more of that.
The Alarmist
PS

I must be really chill, because I hit the horn once a year to see iff it still works.
Adam Smith
PS: Good afternoon Mr. Moderator...

The only time I use the horn is to beep hello.
A light little Beep Beep...

I haven't figured out how to do it on the new car yet.
The horn is just different on that car. It's all or nothing.
A friendly hello Beep should not sound alarming or angry.

I would think angle parking on the left is safer as there is better visibility when backing out to the driver's side. (Maybe I'm imagining this road and parking different than it is in meat space.)

When driving a tractor trailer it is much safer to back in/out of things to the driver's side. (There is a much bigger blind spot on the passenger's side.) With large vehicles it is best if you can park in a way that you don't have to back up. (Especially if you're pulling doubles.) It's not a bad idea with small vehicles either. Parking lots are where the vast majority of car and truck crashes happen.

You're right about these new cars with the overly large pillars and the large trucks. You just have to ease out slowly and hope for the best until you can see around them.

Crashes happen fast and take a relatively long time to fix.
Even minor wrecks cause a lot of work.