RayOVac batteries are a scam

I wish I could include the Cheap China-made Crap topic key with this post, but as, I hated to find out, these batteries, are (Proudly?) "Made in the USA". That is, the AA's at least.

You try to be a prepper or at least "be prepared" as much as a former Boy Scout knows he ought to. Batteries are part of it. This was about kids' toys at first, as I realized years ago that you really need a load of double-A's, triple-A's, quite a few D's, and a few C's and 9 Volters to keep all the toys running.

As with lots of things that I have bought over the years, I've seen the price of batteries go WAY up. I just seem to remember prices while most people's minds are more forgiving and forgetful about them. Peak Stupidity has noted the big increases in lots of products and services, especially over the period from the mid/late-1990s through recently. (It's going to get much worse soon.) Though we noted the big increase in car battery prices, we haven't covered small batteries, as I don't have hard data. I just remember that it wasn't that long ago - probably in the mid-1990s - when one could get multiple D or C cells for a buck, while now you're paying 2 bucks EACH!

"OK", one, might say, "but they last much longer, so you aren't comparing apples to oranges here". Well, first of all, we've noted before that BLS inflation calculations don't seem to take the reverse of that into account, when products last for shorter times - see Tire Inflation by Deflation. But additionally, and as the original point of this post, "they lie!"

I don't expect Duracells to last the 10 years on the shelf as they tout, but they've been OK for me. However, with all that battery purchasing, I decided to by a couple of cases of Ray-o-Vacs. The case of AAAs has 1 1/2 gross (216), and the case of AAs has 2 gross (288). I should say had, not has, as after something like 4 to 5 years, they have almost all corroded in their original packaging! Now, I didn't expect them to go the 10 years that is advertised right here, as an example, for the exact Alkaline AAAs - part # ALAAA-18 (ALkaline AAAs - 18 pack). Maybe they'd be weaker and last 1/2 as long in a toy or flashlight. I just didn't expect them to all corrode like this.

This is disconcerting for a number of reasons. One way to fight inflation, something we all ought to be ready for as if this were 1975 again, is to buy in bulk when things are on sale. We discussed this a bit in The different levels of prepping. This is only worth doing for items with a long shelf life, as I found out the hard way with sneakers long ago. (The glue fails over time.) Batteries are one of THE prepper items*, though, not just something bought for the sole purpose of saving the paying of higher prices later. I was happy to see those long life-times advertised, as that would make them a very worthwhile prepper item. That seems not to be the case.

Even if one is not concerned with any Shit Hitting any Fan, just normal Boy Scout style "be preparedness", he would say you need batteries for emergency use. You need flashlights for emergency use, kept in the appropriate places, with, yes, batteries in them. Nowadays, even for Duracells, after a year or so, the damn batteries have corroded to where not only is the flashlight not going to work with them, but it won't work with any more batteries, as they have corroded all the contacts and more! They are a preppers and a Boy Scout's nightmare, as the flashlights now must be kept with batteries next to them, I guess. One has to put the batteries in when needed, in the dark, and hopefully when in not too much of a hurry. Sure, that's what you want.

No, I don't live by the beach, and the 2 cases of RayOVacs were inside the house in a closet not near open water, in temperatures varying from the mid 60s F to the low 80s F.

Just for the record, here are the AA's. Note "Made in the USA"!: 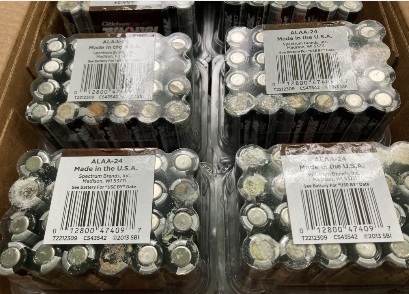 I might have sworn that these cases came from one of the Batteries & Bulbs stores, but I don't see them on the web site. This was a few years back, and I will check my records some more soon to see if I did get them there. I don't know where else i would have bought so many. If I find out where, I WILL be bringing them back, if nothing else to let them and maybe other customers know about this scam.

I'm not sure where to turn to now, for the good stuff. I suppose it's time to get back to reading some of the prepper sites regularly. This kind of thing is a concern to the good people that prepare, if nothing else, for the next hurricane or earthquake, but most of the time for long-term trouble.

AVOID RayOVac batteries. They are crap!

PS: It's not just me with the problems. When I brought this up to a friend he told me that one mechanic friend of his that I am also acquainted with has the same complaint.

* No, buying a few cases will not get one through decades of hard times, but it were a couple of years, it'd be nice to have 5-10 cases of various types.

Mr. Alarmist, Mr. Moderator... This is lasersaber's second build of this little hand crank generator box. (We have no way of knowing what he edited out of his video. Perhaps he tested the components before screwing the box shut. He may have opened the box back up to make repairs. Etc.)

Mr. Alarmist, the other day you mentioned “going Galt”. You probably didn't mean it as harnessing atmospheric electricity to power a motor, but these guys appear to have done just that...

If I were to build a perpetual motion machine I would like to power it with atmospheric electricity. I've tinkered a little with this, but have not found much usable electricity yet. (I did once pull 47v dc from a pair of earth rods connected to a fuji camera circuit. If connected to some sort of charge pump this could charge a capacitor bank and, potentially, batteries.)

I agree Mr. Moderator, youtube is super helpful when it comes to fixing cars and, well, anything.

☮
Moderator
PS: Adam, I didn't watch the whole 14 minutes, but it was pleasant to watch this guy work on this simple, but still clever idea. I have always thought that it'd be nice to rig up something that can take power off a car wheel hub in an emergency situation, say you have plenty of gas but no decent generator, and electricity will be out for awhile. It just seems a little dangerous. It'd be more efficient than just getting electrical off, say, your car's electrical system.

Peter, thank you very much for that info. It'd be great to at least send them back for the money. I don't want replacements, that's for sure.

Alarmist, I don't mind paying a premium for stuff that will last, but I can't wait 10 years (or much less) to know, haha. I will stock up on Duracells, I guess - will look for a deal though. That's the advantage of not just prepping or the worst, but using the same mentality to avoid paying out more money than you could have.

I like your perpetual motion machine idea, but, yeah, I wouldn't screw it together before testing it. Maybe this guy had done it all already, and was just doing it again for the video. People put a lot of effort into doing this for (usually) no gain. I appreciate it greatly. Car repair is where I've gotten the most out of youtube, beside enjoyment of music, of course.
The Alarmist
PS

Good afternoon, Mr. Smith... that looks like a fun project. Is it just me, or is that guy something of an optimist to screw it shut without testing?

When I build mine, I’m going to include an electric motor to do the cranking for me ;~)
The Alarmist
PS

After not being in FL for sixteen months, I was surprised at how well things came back to life when I powered them up. But with Hurricane Elsa at first predicted to head this way, the first order of business was to check the hurricane preps. Surprisingly, the Duracell D-Cells I bought for my emergency lantern ten years ago still work very well, so no complaints there, but I will buy a new set in the hopes I will still have a working set when I actually need one. I also have a couple solar panels I can put out there to keep the iToys charged if need be.

When I’m in Europe, I get four-packs of AAs and AAAs under the market-brand name for €1.59 (roughly $1.90), which is better than the €5.79 Energizers on the rack on the opposite side of the aisle, and I’ve used some ofthe cheapies as much as seven years after I bought them. I did see at Home Depot that Duracells are indeed quite pricey nowadays. I might have to start bringing batteries with me in bulk when I come across ... assuming we are still allowed to travel in our brave new world.

I wonder what kind of power cells they use to keep Zhou Bai Den going. I think he found hidden reserves of energy that were tapped once he was installed (compare the Zhou today to the Zhou of one year ago), but still....
PeterIke
PS
RAYOVAC® Batteries are designed to prevent damaging leaks. RAYOVAC® will repair, replace or refund, at our option, any device damaged by RAYOVAC® Batteries* as long as the batteries and device have not expired, been misused or modified. If exact replacement is not available, devices may be replaced with a product of comparable market value at the time of claim. Leaking battery and damaged device must be provided to RAYOVAC®. Call us at 1-800-237-7000 or send us an email at RayovacConsumerServices@energizer.com for further instruction
Adam Smith
PS: Good evening Mr. Moderator,
The prepper in me is thinking about building one of these...

Sorry to hear about your batteries corroding.