Writer Alan Wall with his Memo from Middle America: (formerly Memo from Mexico:) and Said in Spanish: series, has been on VDare.com since before I started reading. That means at least 15 years ago, by my estimation. He's had some great writing lately. Peak Stupidity discussed a very good post of his that linked up the Kung Flu Stupidity with the Immigration Stupidity in MEMO FROM MIDDLE AMERICA includes Kung Flu sense a couple of months back. Immigration is THE purpose and single of the VDare website, but other topics get touched on. Now, James Fulford, also a long-term VDare writer, has another post linking these two flavors of stupidity. 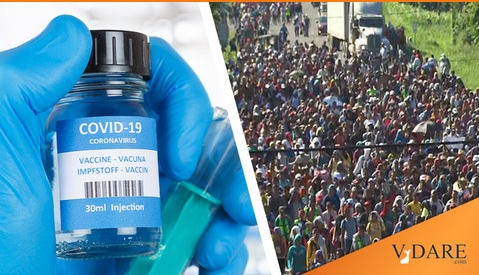 (Graphic straight off of VDare.)

In this latest post, If El Paso Illegals Won't Take The Vaccine, Can We Send Them Back?, Mr. Fulford points out the Anarcho-Tyranny going on at the border. Some of it has been going on since well before the Kung Flu, but Mr. Trump had the Border Patrol, ICE, and what-have-you working with at least a semblance of sanity The Bai Dien administration is pushing hard to increase the Anarcho-Tyranny through insane policies.

Mr. Fulford excerpts a piece of this article from the El Paso Matters by one René Kladzyk (not a Mexican:

Despite an increased effort to vaccinate migrants held in Immigration and Customs Enforcement facilities, a large number of people in El Paso-area ICE detention have refused the vaccine, according to local officials and legal advocates.

El Paso County Judge Ricardo Samaniego [who has been leading efforts to get Americans in the county vaccinated] said that among those offered the vaccine at local ICE detention facilities, only about 33% accepted.

Immigrant rights advocates said issues with the vaccination efforts are linked to an array of structural problems with the federal agency, including: a pattern of medical neglect that fuels distrust among migrants, language access issues that spur confusion and lead to misinformation, and a lack of a systematic nationwide protocol for vaccinating people in ICE detention. ICE officials in El Paso did not respond to a request for specific vaccine refusal rate data.

“As much as we’d like to do it, we cannot force them to do it,” Samaniego said. “In the facilities they feel a little uncomfortable and they’re not trusting … because they’re captured, they’re captive at that point.”

I don't blame these Mexicans/Guatemalans for not wanting the jab. I'm pretty much with them on that. However, were it regular Americans getting forced to get a shot of a possibly deadly vaccine, as the Bai Dien administration wishes, the government agencies involved won't be so concerned with our "access issues" and medical neglect. Mr. Fulford writes:

Of course, if people in Florida refuse the vaccine, they're considered ignorant rednecks, but the concept of "ignorant wetbacks" doesn't exist in the media. It should, though. Many Mexican illegals only have fourth-grade educations, and many do not, as I've pointed out repeatedly, understand the germ theory of disease.

This applies to Central Americans too, and even more to the Africans who use the Mexican Border to sneak into the US.

But their countries have strong public health laws, with compulsory vaccination for things like measles, as The Week noted during a 2015 measles outbreak:

Since these people have no business being here, it's one situation in which I don't have any problem with these people getting any kind of treatment that's good for Americans (their getting the Kung Flu vaccine or not is not a concern for me). Screw 'em - not my problem I've been following VDare for a long time, and their writers have brought up many examples of diseases not seen in the US in 5 or more decades being spread back in our country by these illegal immigrants. "Bedbugs, they're baaaack!" Duckduckgo just pulled me up 4 articles about Chagas Disease, an import from Latin America. Good old Sam Francis gave us an early warning about it in Diversity Is Strength! It's Also Disease back in '03, Randall Burns told us Chagas Disease Seeks The American Dream! in '06, James Fulford wrote about Chagas Disease in Los Angeles County in '07, and A.W. Morgan posted Baylor U Buries The Lead On Chagas Disease—“Mostly Imported From Latin America” more recently, in '15. Chagas is not fun at all, but it's baaaack! I'm telling you all, VDare really has kept up with all aspects of immigration, as THE go-to site for immigration stupidity.

Americans have been letting nasty diseases invade this country for years. Could it be because the general Lyin' Press makes no effort to report on any of this? Maybe they think otherwise, but what goes on both at the border AND with the other types of illegal immigration is not the immigration experience of a Vito Corleone. It's anarchy.

Well, this problem at the border now is just a bit of a pickle for the ctrl-left, the Blue Squad, and the portion of a Venn Diagram that encompasses open-borders idiots along with Kung Flu hysterics. Not all this is stupidity though. It's not that the evil Bai Dien people and the elites behind them are really scared of the virus. They really don't care a lot about the fate of these Mexicans and Guatemalans down at the border. They just are in a quandary about which method of destruction of the US is more expedient, the Kung Flu and further variant PanicFest or the immigration invasion. When the two stupidities (OK, evils, probably) are in opposition, they have to choose one or the other. They could tout all-out Kung Flu vaccination as part of their Police State/Orwellian push. They could ignore it for now, let the poor bastards slide, and push this latest surge in the immigration invasion.

I think the latter, the immigration invasion, results in quicker destruction of American society. Therefore, for our evil elites and their stupid government bureaucrat henchmen, the winner in Immigration Stupidity v Kung Flu Stupidity is ....

Immigration Stupidity wins by 10 fewer years of an intact America.

Moderator
PS: Alarmist, I don't know about that MIT study from the 1970s, but I wonder what they predicted would cause the downfall. They wouldn't have, or wouldn't have dared, guessing it was out-of-control immigration and multi-culturalism back then, would they? If so, they were bright cookies.

"Vaxxes Macht Frei" would be on the vax app now, I guess.
The Alarmist
PS

The MIT study from the ‘70s stuck a fork in the USA by 2040, Vox Deo puts it at 2033 ... based on all facts available, I suspect our overlords, like the bad guys in those spy v. spy flicks who advance the detonation time on the nuke to two minutes, have upped the timer to 2025 because they know they can’t reach their Agenda 2030 goals.

As for those “detention centers,” maybe the new Americans would be more comfortable with taking the stab if we put a “Vaxxes Macht Frei” over the front gate.