I meant to state the following in the previous post, but I'll just start off with this:

I did not mean to single out Pat Buchanan as a stupid guy, or as, more accurately, a naive guy, in that take on his old-fashioned belief in the decency of the ctrl-left. It's a common thing for people to be stuck in their old beliefs, and the political scene is changing rapidly.

It'd have not been the case for me, but I can understand those who follow politics but have not seen what the left is really like until 10 years ago, or even just 5, when Donald Trump came into the limelight. He seemed to really ramp up the anger and impatience for the fulfillment of the anti-American, Communist plans of the left. There really is no excuse for mistaking who they are now, though. Here's one: 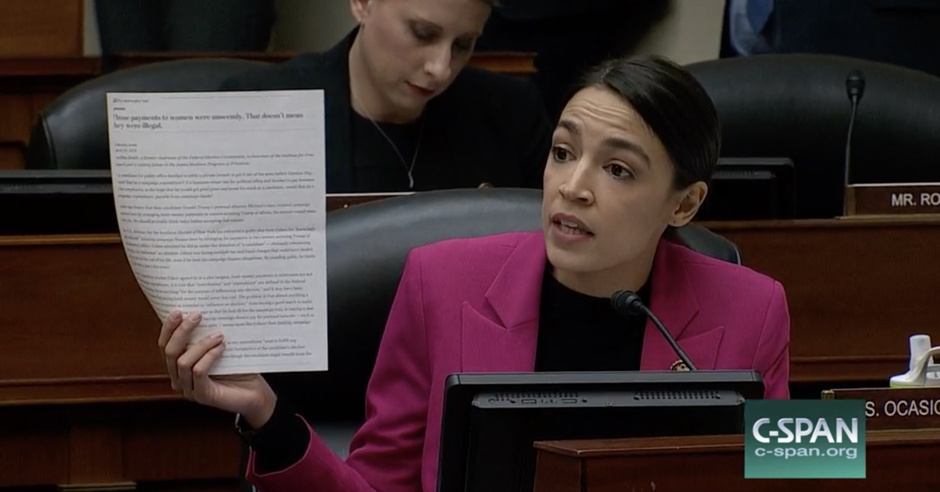 The title of this post is a tad misleading, as I'm not making a comparison of any sort between Pat Buchanan and the Occasional Kotex lady. She doesn't deserve to be in the same room , no, COUNTRY, with Mr. Buchanan. This discussion is about whether Pat Buchanan and the many other pundits and readers of pundits can really see AOC and her ctrl-left ilk for what they are now.

Who are they now? As I wrote above, the ctrl-left of today has gotten impatient. There is a new, younger, crowd that is very used to getting their way when they push the purposefully destructive cultural changes on Americans. There's no big conservative bloc of stalwarts, such as your Jesse Helmses that fought back civilly in the halls of Congress Jesse Helms is long gone, folks. There's nobody taking a stand like he did anymore. The Conservative, Inc. crowd of today doesn't try to fight anymore. They work to keep their jobs by showing that they are in opposition by making the left compromise ... a little bit ... till next year's new, new compromise...

Well, that's "the right". The younger crowd of the left want their way now. They don't care about Constitutions, legal rights, due process, and any of that. Sure, because it helped them 50 years ago when they fought against the Establishment, they used to use those Amendment I and IV rights, often as the slightest technicality to keep out of jail. They are putting their enemies in jail now, so they really can't keep adhering to that old-fashioned Constitution clap-trap. It would slow things way down. I don't see any tears shed from the ctrl-left about the completely unConstitutional holding of the Jan 6th protests without due process as what amounts to political imprisonment.

The ctrl-left are done with even the idle talk about that old-timey American stuff. They don't care if they are seen as hypocrites. They don't care if we can see that they are blatant liars telling those "absurd lies" that so vex the pundits like Mr. Buchanan. "Why? Are they that stupid?" NO! They don't care what you think of them. They can jail you for fighting back those who violently interrupt your peaceful rally. They are working very hard on passing through legislation that allows them to jail any one of us, for "domestic terrorism". If you don't know the definition and don't want to participate in domestic terrorism, well, they will define it when they see it they need you to go to prison.

AOC and her ilk fancy themselves the new Lenins, Maos, and Pol Pots. No, they don't really WANT to kill millions or a third of their countrymen, whichever comes last. Of course not. Neither did Lenin, Mao, and Pol Pot... at first. However, as the others did, the American ctrl-left do want to finish their Cultural Revolution and implement the new Communism. If people get in the way, they need to be jailed, or worse case shot, that's all, like Ashli Babbitt, for example.

There's just a very minor detail the American ctrl-left has missed. Those other Cultural Revolutionaries, destroyers of traditional society, and leaders of the new utopian societies had everyone disarmed first. Ooops... They may not get as far this time... if I have anything to do with it. Now, sorry, Pat Buchanan, that was so uncivil of me.

Anonymous
PS
There is an interesting race between the decline of US Federal legitimacy and funding on the one hand and the growth of Texas and Florida as nuclei for an alternative way of life.
The Federal problem is that it has no economic base save finance. Its cities, which are its power base, have been effectively abandoned by every non-governmental organization (except the government funded NGOs, of course). Should the financial funding be interrupted, the current Federal political base would have strongly negative economic worth, while the Texas-Florida area would have the trade and industrial base to survive, provided that they sent little or nothing to the Federal base.
The question, the, becomes whether the Feds would have the forces necessary to displace the Texas/Florida state governments and collect enough taxes to be prevent destruction by food riot in Federal urban areas.
Looseley related, a few thoughts on equity. Did you know that ticks, fleas, lice, and mosquitoes can’t reproduce without mammalian blood? You, reading this, are a mammal, and have considerable mammalian blood. Since the need of the insects is so great (their next generation depends upon your blood!), simple equity and humanity requires that you let these harmless insects, victims of necessity, bite, and then feed, to satisfy their dire needs. Do not slap, do not use lice combs, do not launder clothes in very hot water, above all do not use chemical poisons – that would be committing insecticide. Remember: we do not need blood. We need blood justice!
Moderator
PS: Yeah, I didn't even bring up Castro as one of these same types. Che was indeed as much as a murderous bastard at the others. I was glad to hear about his death, even if only from a history book.
The Alarmist
PS

At some point El Commandante Fidel had to dispatch Comrad Che to places other than Cuba, but not before Che, in his revolutionary zeal, had conducted a large number of show-trials and firing squads. AOC and the Squad will eventually have to go, but not before doing a lot of damage.