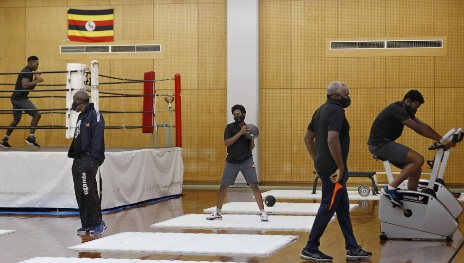 There is likely no way I'll see any of the '21 delayed Olympic Games, excepting maybe a clip or two of something cool on youtube. A humorous episode that just wrapped up was an escaped Ugandan weight lifter who wandered around Japan, outside his assigned COVID workout zone. Per this article in the Kyodo News,

Ssekitoleko went missing Friday from the country's Olympic team in Izumisano, Osaka Prefecture, after leaving a note at his hotel saying he wanted to work in Japan as life in his home country was difficult, according to Izumisano officials. The city and his team had been trying to locate him with help from police.

That was a week ago Friday, the 16th. His team had been training in their special "contained" area since mid-June.

Can you even defect from a shithole African country? Is there such a thing? I mean, back in the Cold War days, you'd find a way to escape Totalitarianism, and the Free World would welcome you and maybe glean some good information too. Even in the Uganda of Idi Amin, couldn't one just leave to another shithole African country? Who would care? Could those countries have control real border control? [looks away embarrassed...] Who would welcome you, though?

The Japanese are still pretty sane about not letting many foreigners in. They didn't want this guy. They especially didn't want a guy spreading that dreaded Kung Flu all over the countryside. That's the ironic thing. The Political Correctness factor, existing in Japan too, was probably thrown out the window due to this COVID-carrying breakout athlete. At least he wasn't a cross-country runner, but then those bullet trains are pretty fast too.

The mayor of Izumisano, which hosted the training camp, said at a press conference that Julius Ssekitoleko expressed hopes of staying in Japan in the morning but was later convinced to go back to Uganda during a meeting with the head of the delegation.

Confirming a man found in the central prefecture of Mie on Tuesday by police was Ssekitoleko, the Ugandan Embassy in Tokyo has said, "Any issues to do with alleged absconding from the duty he had been flown to perform in Japan and related disappearance from the training camp, will be handled appropriately upon his return."

I feel sorry for the guy, really. He wanted to stay in a decent country. Thing is, it's not his people that built said decent country. In addition, unlike pretty much any foreigner in this country, he'd stick out like a sore thumb in Japan. Unz commenter Rob McX noted, "Someone needs to tell him picking cotton is no longer a thing."

Moderator
PS: Hey Czar, thanks for writing in. I haven't written anything on this 46 year-later Saigon redux. Who could have predicted that, after ... 19 years running?
Czar of Magic Soile
PS Wokekanda is real, it is on the Potomac!
This just in from the Taliban-come back anytime, Yankee.
Moderator
PS: Or, magic dirt trodden by tragic people.
The Alarmist
PS

There’s a reason a resource rich continent is a shit-hole, and it literally is not a lack of magic dirt.