I knew a guy who used to fly the Panavia Tornado*, along with the General Dynamics F-16 and, earlier, the Lockheed F-104, with the Luftwaffe. He mentioned something about these runway buster bombs, something like this: 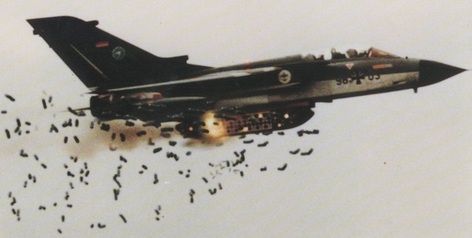 Could we use some more JP233 runway busters? That'd be for the airports in Afghanistan of course. Now, don't get me wrong. I don't wish for innocent Americans to get taken by the Taliban as hostages (went through this crap about 41 years back).

However, how many innocent people are there? The war was going on for nearly 20 years. Anyone who signed up on his (her, its) own for this stuff did not do it to defend America, or at least one would have to be pretty slow to believe that, for the last 10 to 15 years anyway, of what was an occupation. They'll probably be extracted. There are reporters stuck over there. I don't care too awful much - them's the breaks. Then there are the tens of thousands of Afghanis who supposedly deserve to come to America for, helping out or something. Nah.

Politicians of both squads, State Governors, all kinds of idiots have been inviting yet more "refugees" to continue the process of changing the population out. We urge everyone to go ahead and argue against this**, but sometimes we just yearn for a simpler, more decisive solution:


PS: Yeah, I know that this form of weaponry is probably obsolete. Cruise missiles can fly in and bust up whole airfields now, but these things were cool and useful in their time.


* European made (United Kingdom, Germany, Italy and the Netherlands) with headquarters in Germany.

** The stalwart Ann Corcoran has been fighting the Refugee Resettlement racket for many years.

MBlanc46
PS One has to be very careful where one says this sort of thing*, but around here folks tend to be anti-Globohomo enough that I can probably get away with it without taking too much flak. Any non-Afghan still in Afghanistan in AUG 2021 is there for one reason: To make trouble. Now the trouble has devolved upon them. Boo, bleeping hoo. And any Afghan who was collaborating with the invader is just that, a collaborator. A Quisling.

* I’m in a spot of bother with some folks over at The Other McCain for suggesting that we shouldn’t have just Stayed the Course, and that George W. Bush should be prosecuted.
Moderator
PS: Haha, on the last part, Alarmist. Great comment - I agree with every bit. I wonder if the whole COVID thing will be any factor in the boarding of flights, or are we past all that during, well, the times when things are getting REAL.
The Alarmist
PS

The Americans who are “stranded” there are Camp Followers and Carpet Baggers, and not very bright if they couldn’t see what was coming, especially after the military evacuated Bagram overnight. What galls me more is that they kvetched big time about the $2k the Dept of State suggested they would have to pay for their repatriation. Funny that they wanted to profit from our presence in Afghanistan, but decided to wait for a free ride out.

I doubt the Taliban want these people sticking around, so there’s not much good to come from taking military action. I guess these folks will have to bear the airfare for Aeroflot, China Air, and Emirates to take them out on regularly scheduled flights they will no doubt continue to fly to Kabul.

As for the reporters, maybe the Taliban can embed them and make them report the truth.
Dieter Kief
PS

After decades of interventions: Afghanistan is now the unhappiest country in the world: