Russia Today on Fauci: How the Fauci Stole Christmas

I would say "hey, it's just a poem", but then he DID steal a good part of Christmas 2020. He's only trying to this year. In this article, not really a "Part 2" from our previous post after all but taken from the same Russia Today article, we compare Anthony Fauci to the Grinch of Dr. Suess fame.* 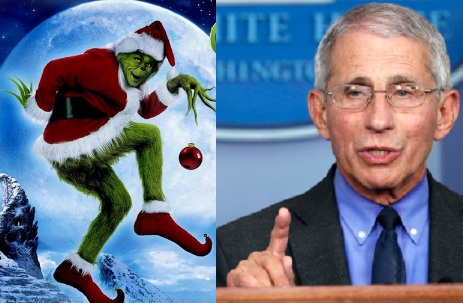 (That line above is from the movie, not the book.)


The shear arrogance of this guy is amazing. From the Russia Today article:

White House health adviser Anthony Fauci has insisted that Covid-19 is not being spread by untested immigrants. [Yeah, yeah, we've already covered that piece of stupidity] He also claims the virus remains such a threat that traditional Christmas celebrations might need to be canceled.

My bolding for a good reason.

Fauci earned backlash for insisting Covid-19 remained such a problem that a traditional Christmas with family and friends might need to be canceled again this year. “It’s too soon to tell. We’ve just got to concentrate on continuing to get those numbers down and not try to jump ahead by weeks or months,” he said.

Anthony Fauci must have the biggest gall bladder this side of the Jurassic Era. I mean, he's got a LOT of damn gall to assume that Americans are ready to listen to him! We have no obligation to listen to some 40-year US Government medical expert, no matter if he were an intelligent guy! However, after a year and a half of Fauci's back-and-forth pieces of erroneous important advice and many claims proven already to be false, how does he get off assuming ANY Americans are ready to heed his advice? Oh, well, I guess he may know that there are a lot of stupid people out there, but we're not all stupid.

“I guess I’ll just have to put off deciding whether to celebrate the birth of Christ with people I love until Anthony Fauci tells me it’s okay,” author Andrew Klavan tweeted in reaction to Fauci’s Christmas comment.

This latest arrogance shows Anthony Fauci indeed acting like an Ayatollah by issuing prophesies, edicts, and fatwas left and right. The people are expected to obey. Fortunately we are not yet forced to subscribe to his or any other sect of the Corona Cult.

Others blasted the health official for being a “Grinch” and waved away his advice.

I'd have figured that was coming. The Dr. Suess book, How the Grinch Stole Christmas is a 64 y/o children's story with that now famous Grinch character who was bound to be compared to Anthony Fauci. After just reading the book quickly on-line, I would have to say that the Grinch comes out very favorably in a comparison. After all, the Grinch learned the meaning of Christmas when he heard the singing in Whoville Christmas morning even after he had taken away all the presents. I don't think Dr. Fauci, in WuFluVille, has learned a damn thing after his year and a half of stealing parts of Americans' lives and traditions.


Every Who Down in WuFluVille liked Christmas a lot,

but the Grinch, who lived east, in a big Blue ville, Did NOT!

Now, please don't ask why. We all know what the reason.

It's partly that his head isn't screwed on just right.

Additionally, perhaps, it's that he loves causing fright.

But I think that the most likely reason of all,

May be that his heart is two sizes too small.

Whatever, we're sick of his panic from flu's,

Before this next Christmas, this asshole will lose.

Staring down from his podium with a Pro-Panic frown,

at the warm lighted windows below in our town.

He knows every Who down in WuFluVille below

is busy right now, telling Fauci just where he can go.

"And they're throwing their masks out!" he snarled with a sneer.

Then he growled, with his Fauci fingers nervously jabbing,

"I MUST find some way to stop Christmas by blabbing!"

There are still way too many overly-compliant sheep in this country. Even many of them, however, have to to see that this Dr. Fauci is entirely too full of himself and not worth paying attention to. The tide is turning.

* We are BIG, BIG fans of Dr. Suess here at Peak Stupidity. We reported on some ridiculous PC-based censorship of a few of his great children's books a few years ago in Every day, from here to there, crazy broads are Everywhere., Dr. Suess Revisited, and, regarding the same book as this post, How the Grinch Stole Back Christmas - by Mr. Joe Long.

Moderator
PS: I've experienced some of this supply chain screwage and labor shortage myself lately, John F. The end of the original "Grinch" shows that we in WuFluVille ought to be able to have a Happy Christmas nonetheless. I don't know if Americans are still up for that attitude though ...

Don't See How There Will Be Much Of a 'Christmas' When Everything Is In 'Short Supply' Or 'Out of Stock'.!!!!