Turning America into Haiti - it's not a mistake. 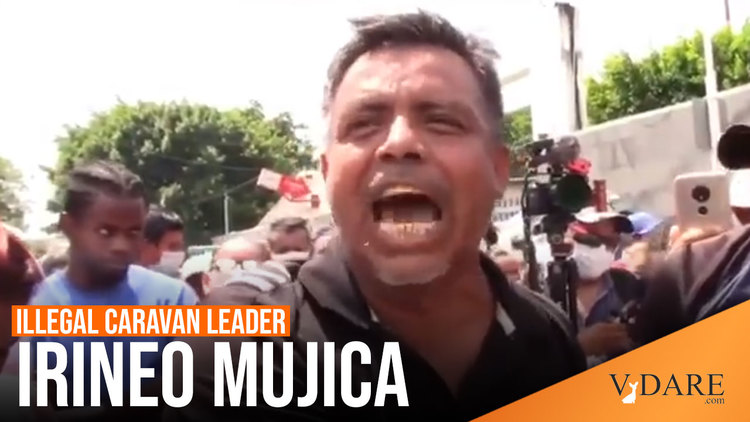 Peak Stupidity would like to link our readers to, and excerpt most of, a VDare article or two every day of the week. Immigration stupidity is still the most used topic key of the site, as the immigration invasion, legal and illegal, is an EXISTENTIAL one. However, you can just read VDare.

Something struck me in the latest James Kirkpatrick article on that site, because he understands something that Peak Stupidity has been saying for a long time. In Biden’s Immigration Disaster: None Dare Call It Treason. But What If THEY Call It War?, Mr. Kirkpatrick discusses the usual Anarcho-Tyranny and the newest Immigration Stupidity (OK, EVIL) of the newest caravans of Haitians, Guatemalans, and pretty much whoever wants to just enter our country. It starts with the revealing of one traitorous dual citizen* scumbag, going by the name Irineo Mujica, who is encouraging and even arranging these invasions.

Let Irineo Mujica, who is reportedly leading one of these caravans, speak for himself—migrants are coming “with or without papers” and that they are “ready for war”.

I won't go through the whole of Mr. Kirkpatrick's article. You can read it there, but bring your blood pressure meds.

There's the part that stood out for me, in bold:

And it has set loose more than 100,000 illegals, regardless of Covid vaccination status, while simultaneously pushing massive pandemic restrictions on actual Americans. This isn’t simply a mistake. It’s a deliberate attempt to turn America into the Third World, so the Left can reign over one giant Haiti.

That's the deal! I've written this before: The Globalist elites of the world don't want to have to deal with any hold-out countries, with lots of White Middle Class people. These people tend to start competing businesses with better ideas. They tend to form political associations of all sorts that interfere with Big-Gov/Big-Biz business as usual. They vote wrong, if you let them, or if you don't make a big effort to overwhelm them with fraud. (Hey, it's more work than you think!)

The Globalist elites want to have populations such as those that have been in Latin America, Africa, and most of Asia, for centuries. They can throw some bones to them, if they feel like acting like the good guys occasionally - it's a feel-good thing. Maybe some other times they want to put the hammer down by finding an excuse for some additional hard-core Totalitarianism, for the people's own good - most of the peons don't freakin' know any better, and the ones that do can't do squat-all about it.

They've got to get rid of that hard-working, intelligent White Middle Class though. That is TOP PRIORITY.

I'm glad to read someone else, especially on a great website like VDare, write this out. I will quibble with Mr. Kirkpatrick that's it's not only leftists who want this. Besides the Commies, there are others who would like to destroy traditional America.


* Which, IMNSHO, is a stupid concept to begin with. Pick a side.

Moderator
PS: I guess, Mr. Blanc, that it was a viscous cycle of sorts. As Wall Street got richer, it didn't hang out with Main Street so much. With less in common, it had less and less of a problem with destroying main street for profit, resulting in it having even less in common.
MBlanc46
PS Europeans are the creators of modernity, including the middle class. The financial class and the middle class used to be allies. In the US, the Republican Party was an alliance of Wall Street and Main Street. Then Wall Street saw that it could make itself even richer by taking over Main Street. So, for example, the shoe store of Mme B’s uncle, on the town square in Small Town Southern Illinois, was driven out of business by the national chain at the mall out by the Interstate. The sons who were to have taken over the business had to become wage workers rather than local business owners supporting Little League, etc. They’ve come for the engineers and systems analysts by importing tens of millions of East and South Asians. They are coming for the rest of us. We are running out of time to do something about it.
Moderator
PS: The good old "Twilight Zone".

BTW, the first time I heard "it's not a bug, it's a feature" was at a small software company not so long ago. I thought it was funny has heck, because it works on a couple of levels.
The Alarmist
PS