I get the America's First Freedom magazine monthly, as I have for over 2 decades. Sometimes, with all the web stuff, I accumulate these magazines, until I find a place to leave them, say, at airport terminals, in blue territory. Even if I read nothing more due to lack of time, I make a point to read the Armed Citizen column*, a 1 or 2 page collection of half a dozen or more stories of Americans successfully defending themselves, their property, and/or their families with guns.

Where does the "Florida man" come in? It was Melbourne (Brevard County) at the New York Hair Barbershop. This is straight out of the Armed Citizen column: 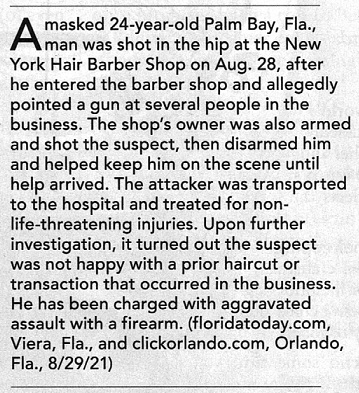 This was not the typical robbery for cash, anti-White hate attack, or attempted rape or burglary. Note the motive of this suspect. It was pretty humorous to me, anyway. Perhaps, not only did he get a Mohawk when he requested a Mullet (easily confused, I suppose), but he might have gotten scalped in the transaction too.

Is there something to this "Florida man" thing, in which they seem to be in the over-the-top stories of really loony actions? These are usually white rednecks**, who are a little more prone to non-lethal off-the-wall activities, especially when alcohol is involved. Peak Stupidity featured one other story, related to the Donald Trump campaign of '20 - Florida Man bulldozes front-end loader's Biden signs in drunken "rampage". The guy shot in this story will live to have his hair cut many times again. Hopefully, he will calm down.


* The column now says "Official Journal", with "Armed Citizen" in small letters underneath. I have no idea why this change was made, as the new name is meaningless.

** Not this time, though. Per our commenters the assailant, Mr. Marlon Mascoe is black and had a rap sheet already before this smooth move.

☮
Moderator
PS: OK, I should have done that in the first place. Thanks, Alarmist and Mr. Smith.
Adam Smith
PS: Good evening everyone...

“The assailant's name is Marlon Mascoe, which sounds more likely to be a white than black name...”

“Go to duckduckgo and search images for Marlon... just sayin’...”

Go to duckduckgo and search images for Marlon ...

just sayin’
Moderator
PS: When it comes to the "Armed Citizen" column in that magazine, yes, most of the time (depends on geography), I figure the perpetrators of unknown race, usually/hopefully in the hospital or farther, are black. However, the "Florida Man" theme seems to be about your wild redneck type.

I don't in this case - here's the short article on floridatoday.com (should have put it in the post and will shortly):

The assailant's name is Marlon Mascoe, which sounds more likely to be a white than black name, but there's no pic. The video on that page is about something else.
Mblanc46
PS The Alarmist: It’s not always a Negro in stories like this, but 4-1 or 5-1 it is a Negro.
The Alarmist
PS

I thought “Man” was a euphamism for PoC, but I guess that doesn’t jive ... er, that should be jibe... jibe with getting a mullet. A mohawk worked for Mr. T, however. The intent to get a mullet would signal looney in any case.