Alec Baldwin as a bumper sticker

We will end this week of deeply serious posts regarding our domestic enemies wanting us dead, their further implementing population replacement along with purposeful bankrupting of the nation, and their working to put down all resistance via violence and lawfare on a lighter note. I thank commenter Adam Smith for this image that he'd placed in one of The Unz Review comment threads. 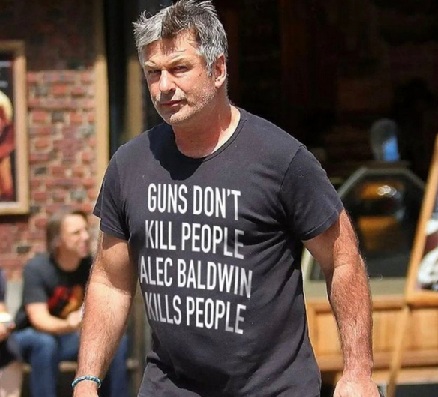 I've heard about this accidental shooting on a movie set only via Steve Sailer and his commenters. My comment there was to the effect that it wouldn't bother me any if all these Hollywood people do stupid things to eliminate themselves. They don't mean much to me and don't contribute to the well-being of this nation. Who cares?

We'll discuss that video of the political Dad of the State of Florida's Chief of Kung Flu Panic, Mr. Daniel Uhlfelder, next week, have a book review or maybe two, some more media stupidity out of yahoo, and plenty more. Thank you all for reading and some for commenting!

Moderator
PS: Mr. Hail, I read your comment yesterday and had meant to respond already. China is an area in which Peak Stupidity has some small expertise - I think I recall that you have been there too.

Ron Unz (who's never been) and Fred Reed (who went on a 2 or 3 week tour with his Senora) do not count as experts, no matter how impressed they are with the indeed-impressive infrastructure, and no matter how much reading around the web they've done.

Yes, the place is getting Orwellian. I have 4 posts (under the "Books" topic key) with a review of Kai Strittmatter's book "We Have Been Harmonized". Additionally, I get the inside scoop from Chinese people I know.

Outsiders who are panickers to boot can go on all they want about "they knocked out this virus the right way" (yeah, by locking people in their buildings). There's a whole lot more going on, and there could be COVID cases in places we don't hear about. The Chinese CCP has ways of suppressing the news that even the US Lyin' Press could learn something from.

Thanks for the disturbing PRC video.
Maybe they can get some bigger signs to hang around the children's necks?
Are they using the word 'Orwellian' like it's a positive thing?

As long as we're going to post a little off topic stupidity...

Someone should put a stop to this insanity before it goes too far...

Of interest on several regular themes here at Peak Stupidity, overlapping in this case:

PRC state media salutes children as "cute and brave" while showing Chinese "kids from kindergarten, with QR code hung around their necks, queued in an orderly manner for nucleic acid test."

Yes, they are bragging about it. The word 'Orwellian' gets tossed around a lot. I don't know what to call this.

A few other PRC state-media Twitter accounts chime in to say how great it is. Note that Twitter itself is banned in China so they are doing this Corona-and-pony show exclusively for export to the West.

The tweet-comments are almost entirely negative.

One says: "I’ve seen many of these kids after they grow up. My Chinese colleagues at business school had the best grades but their lack of creativity was shocking. Something that I also saw on the work space."

Another: "This isn’t self discipline. It’s called conditioned oppression. They will only know and understand obedience to the ccp."

You get the idea.
Adam Smith
PS: Good evening everyone...

Depopulation vs. increasing control of the unwashed masses. Why not both?

The kill shot can't kill too many people too quickly or even the most enthusiastic vaxxers will notice.

From the under-reported databases in the US, UK, and EU of adverse vaccine reactions to the mRNA “vaccines,” we know that there have been tens of thousands of deaths and millions of injuries associated with the death stab. I've seen some estimates that say the panicfest and the poison needle have already removed about 500,000 medicare recipients from the medicare rolls. (Culling the elderly to balance the books?) Matthew Crawford estimates that (worldwide) between 800,000 and 2,000,000 so-called “COVID-19 deaths” may in fact be vaccine-induced deaths.

“I also wondered how one could do this photoshop job. Do you just blend in his head?”

Lol. You put text on his t-shirt. The tricky part is rotating, bending and curving the words and using the text to path and perspective tools (or anything else that works) so the words look natural. Whoever photoshopped this has better photoshop skills than I do. They did a nice job.

☮
Bill H
PS Aha, yes, the Swine Flu vaccine. I had been trying to remember the specifics. I recalled only that some vaccine had been halted very rapidly, and that it the one I had been thinking of.

Compare that to tens of thousands affected, thousands dead today, and the vaccination campaign not only NOT halted but reinforced with slogans about how safe the vaccine is. This nation has gone insane.
Moderator
PS: The sterilization effects is another matter. Indeed, that would be a part of the Great Depopulation that I could believe.

We have a neighbor couple (well, 3 now) of which the wife took the damn jab while pregnant. What a stupid move! These people were so paranoid (I think the lady more than the husband) that we didn't see the woman get out of the house but once or twice in 6 months of pregnancy (they'd get in the car within their garage occasionally - I guess for doctor visits), and the lady had a mask on both times. The guy finally ditched his when working in his yard.

Now that they had a little girl, they don't worry about the virus. Whaaa? I sure hope the newborn (about a month old now) is fine, but, man, why would you take a chance like that?

Hmmm, I guess the sterilization effect could be masked by all kinds of explanations - too much soy, the Idiocracy effect (first scene), etc., but I guess we will see on this too.

BTW, I thought there was pretty good discussion for the most part on that Mike Whitney thread. I like that Mr. Whitney admits that he doesn't know the science and writes accordingly. Mr. Unz will tell you that it's not his field too but then be so damn sure of himself because some guy that he knows at Ft. Detrick, or a commenter that sounds very learned on the matter or whatever.
Moderator
PS: No, Alarmist, I don't chalk it up to purely stupidity. I see the evil, if nothing else in their not giving a damn about the big number of deaths or permanent damage done by the vax. I agree completely that, when you think of that swine flu virus being pulled off the market after those 50 deaths, this is 1000's of time worse.

I think they don't give a damn, and will ignore all ill health effects, or deflect it as "long COVID" or whatever, because their aim in having that much greater a control of the population is what matters to them.

Now, if this virus keeps killing people after the jab in a consistent long-term manner, I would have been proven wrong.

Either way, neither I, nor anyone in my immediate family, will take this. We will fight the Big Corp system first. There is some good news and some bad on this. (I don't know how much detail I should get into sometimes.)
The Alarmist
PS

If they killed millions in months, they’d be hung from lamp posts in months, but doing it tens of thousands in a few months and perhaps a few million more per year over a few years while sterilizing millions of more can be blamed on the dreaded COVID.

To be frank, the official databases of adverse events in the US, UK, and EU show at least 50k deaths shortly after vaxxes have been administered, and TPTB dismiss these with a wave of a hand while they keep jabbing. Compare to Swine Flu vaxxes of 1976, which were stopped after 50 deaths.

We are not dealing with stupidity or hubris here; we are faced with evil.

They’ve told us for a decade there are too many people for the good of the Earth, and they’ve told us every person on the planet must be jabbed. Coincidence? I think not.
Moderator
PS: I saw your comments under the Mike Whitney post, Alarmis. I'm sorry, but I don't agree it's about depopulation, or else they've done a really poor job at it. I think it's more about increasing control, as usual.

Yes, I also wondered how one could do this photoshop job. Do you just blend in his head?
The Alarmist
PS

I’ve reached the conclusion that the “Great Replacement” is a distraction from the “Great Depopulation” being implemented via the vaxx mandate.

But I guess they need cheap labor to bury or burn American bodies.