Will Gruesome Newsome come out?

Gruesome Newsome gets the jab: 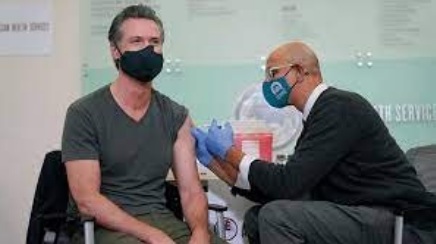 (Some say his saline solution was contaminated with a vaccine of some sort by mistake.)


I know the hard-left Totalitarian of California has been called Gruesome Newsome before, but this appellation may be more fitting now, per rumors that the Governor has gotten some type of syndrome from his booster shot of Kung Flu vaccine. (I read somewhere yesterday that he was mixing and matching types too, but I can't find that right now.) It's kind of fitting that he got this 4 days before Halloween, as he may have become a real Gruesome Newsome after the shot.

Politicians don't normally stay out of the public view for long. (That is, unless they are allied with the Lyin' Press in an election against Donald Trump and just don't want to say something stupid on the record for a couple of months.) Not only that, but this guy had Climate Summit to get to! Why miss out on the opportunity to burn 25 tons of Jet-A* and signal your virtue, governing 40 million Californians into the ground to SAVE! THE! PLANET!.

A writer named Steve Kirsch on the Substack site speculates Gavin Newsom is out of sight likely because he had Bell's palsy from his booster shot. He thinks it's more likely Bell's Palsy that Newsome contracted rather than Guillain-Barre syndrome, but thinks it's one of the two.**

It’s been rumored that Gavin Newsom is out of sight since getting his booster on Oct 27 because he developed Bell’s palsy (or a closely related, but more serious condition of Guillain-Barre syndrome (GBS)). This can happen within hours after getting his booster so this make perfect sense. This explains why nobody has seen him in public since he got the shot; anyone who saw him would instantly know.

Now, November 9, almost two weeks later, he is scheduled to do a livestream 11:45 am on at the California Economic Summit per this article. By then he could look totally normal as I will explain below.

A source close to Gavin Newsom told The Defender the governor experienced an adverse reaction to the Moderna COVID vaccine he received Oct. 27.

I’m guessing it is Bell’s palsy for three reasons:

1. it’s far more common side effect than GBS (by a factor of almost 5)
2. it’s common after Moderna (which is what he got),
3. it resolves relatively quickly compared to GBS (within days or weeks) so it would enable him to “fully recover” in 2 weeks and do the event today.

I don't know, but the more I read, the more I am not only against taking this vaccine for political reasons, as per Ron Paul, in this (another) great post of his. One possibly-duly-elected guy who is Administrator of the Executive Branch of the US Feral Gov't, just plain does not have the power to mandate the taking of any medicine, much less an experimental vaccine. Now, I'd be pretty worried health-wise now too. 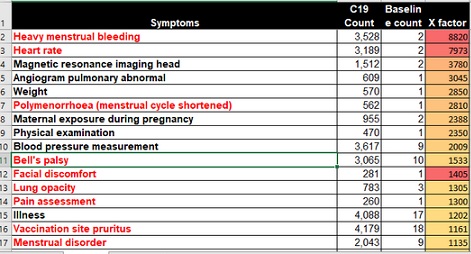 Peak Stupidity has not written much about the vaccine in all our coverage of the Kung Flu stupidity. We will be forthcoming with more posts about this important subject.

Back to Gruesome Newsome, before he's even come out into the sunshine, this guy is STILL coming out pushing for 5 to 11 y/o Californians to be inoculated with this crap. Is that stupid or evil or both?

* I estimated that fuel burn for 20 hrs. round-trip - San Fran, CA to Glasgow, Scotland - in a large-sized Biz Jet that burns, say, 3,000 lb/hr of fuel in cruise and just rounded conservatively (we want to conserve, you know, for THE PLANET) down to a nice round number.

** The article has an embedded string of text messages between Mr. Kirsch and some doctor friend. I'm not knocking the information, but, man, that's probably even worse than tweets! The text messages are in the bubbles with the typos and all. Why not just summarize it like, oh, I don't know, a WRITER, would do?

Moderator
PS: Haha, Bill, that was funny. Trick or treating? I mean he may have been in great condition to scare the hell out of people, so there's that.

Robert, the Sheriffs have the last word over Feral Law and yes, mandates. In this world of Big-Biz, though, how do the Sheriffs nullify the Big-Biz practices?

We are running up against this stuff already in my family. It's going to be interesting.
Bill H
PS Gruesome has still not actually appeared, as far as I know, but has offered a reason for his disappearance. First it was "family matters," then it was refined down to "I had to go trick or treating with my kids."

Going trick or treating took 12 days?
Moderator
PS: About mandates vs. laws. I do know of the difference, but then it's just a matter of semantics if the Big Biz execs and HR people ACT like they must comply. I suppose the difference puts the onus on these Big Biz people vs. Brandon to some degree. They all but a few seem to be Fed Gov sackhangers, from what I've seen.

Even the airlines that backed off from the vax requirement did it only due to worries about major disruptions in service rather than "We were wrong! We do not have to comply with this Executive Edict (mandate, whatever)". I wish I'd hear/read about that just a time or two.
Robert
PS: Mr. Alarmist, our local sheriff agrees that mandates are not laws. A while back, near the beginning of the current unpleasantness, he said that he and his men would not enforce the state's mandates. "That's the job of the health department. They can do it if they want." They didn't.
Robert
PS: Can I get a vixen instead? Can I give her my booster shot?

P.S. A Polish (?) lady I was talking to recently, pronounced it to rhyme with mix-IN with a heavy accent on the second syllable. So I didn't quite make this up on my own.

PP.S. Let's go Newsome?
MBlanc46
PS I have so far resisted the vaccine. It’s very likely that I shall do so as long as I can. But it does appear that Those Who Rule Us are going to try to make life very difficult for resisters. They don’t necessarily need to use the legal system to enforce their schemes. It’s pretty clear that corporate America and a vast army of Karens will take on the burden of enforcement.
The Alarmist
PS

BTW, mandates are not laws. TOTB are cointing on the system remaining stacked against you, though I don’t know how that works when the people they are screwing the hardest are the police and military.

I guess it’s a good thing they backed off on the truckers, because Americans might really lose their shit if there’s another shortage of TP.
Moderator
PS: Yeah, or someone screwed the pooch, Alarmist. Can they make him look at least as good as that old lady in "Brazil"? I think that was the movie I'm thinking of. Either way, "Brazil" is a good dystopian Sci-Fi movie - saw it at the theater.
The Alarmist
PS

I thought our lords and masters were supposed to get saline or the safe batches.