It was a demo. It was a demo on what NOT to do when handling guns. Here, from inside the courtroom, as seen at an angle from the court observers' view, the people on the right side of the room having a view right down the barrel. 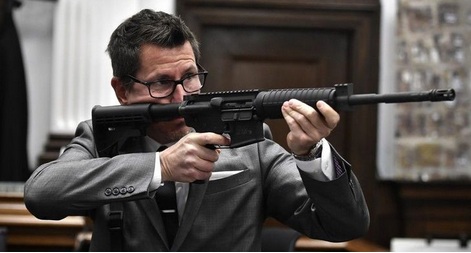 As noted before, Peak Stupidity can't cover everything, and we try to concentrate on stupidity vs. evil. We'll write a short post to come on this, but suffice it to say here that, though we have only watched or kept with a very few details of the Kyle Rittenhouse trial, we DO think this is one of the most important trials there has been in a long time. I mean, there shouldn't' have been ANY trial at all, due to no good reason for charges to be filed. However, since patriot and hero Kyle Rittenhouse IS on trial for murder or manslaughter, it's very important to the country that the right of self-defense be upheld here.

11 days back on this site, in an unduly long and rambling post, we declared that there are Three trials for the purpose of crushing American resistance. Kyle Rittenhouse's is the most important of the 3. The ctrl-left would like nothing better than for Americans to understand that any defense of their property and very lives against the ctrl-left's street thugs of any race, creed, or national original will not go unpunished.

Again, without having read many details, I did come across (per VDare, as usual), this post by PJ Media's* Stephen Green about lead prosecuting attorney Thomas Binger's demo of how not to handle guns during his closing arguments. See WHOA: Rittenhouse Prosecutor Thomas Binger Aims AR-15 at People in Courtroom, Finger on the Trigger.

As an owner of multiple firearms, I am not as regulated as I would like to be. WHOA! (as the Vodka-man said), no, by "not as regulated" I mean not as in practice and disciplined. I haven't been to the range in a long time. (I am very partial to outdoor shooting.) Even so, gun safety has been ingrained in me since I got my first .22 rifle. I will slightly adjust Vodkapundit's 3 very basic rules, in his post, that idiot prosecutor Binger violated, and right there in front of everybody, on camera!

1) In terms of where it's aimed, you handle every gun as if it is loaded.
2) You never aim your weapon at something you aren't ready to shoot.
3) You never put your finger inside the trigger guard until you are ready to shoot.

(Yes, in the picture, it looks like the chamber is open, but this still violates the rules. You just don't do this.)

The ever so occasionally snarky Instapundit remarked that "Alec Baldwin was unavailable for comment."

OK, that was funny, but let me put it seriously. I don't give a rat's ass about who shoots whom in Hollywood. If it all imploded over there that'd be a positive for America. Thomas Binger is the lead prosecuting attorney of this very important self-defense shooting case. There, in his closing arguments, he handled a rifle as Nancy Pelosi and other left-wing gun-controlling scum would, who know nothing about guns. It does not help his case at all the Mr. Binger seems to know jack-squat about guns himself. It not helping the case, well, that's also good for America!


PS: We hope to hear about an acquittal soon, but as many have discussed, the ctrl-left's mob actions of threatening jurors may make a difference.


* Stephen Green is one of Instapundit's** (Univ. of Tennessee Law Professor Glenn Reynolds') main pundits. I had no idea till now that he is one and the same as the Vodkapundit.

Sam J.
PS We can only be thankful that it was not Alex Baldwin holding that AR.
Corrupt
PS

I read an article today that indicated the prosecutor broke at least 2, and possibly 3 state laws during his very stupid demonstration (the third charge depends on whether the bailiff was in the line of fire).
Moderator
PS: M, that idea has been brought up. Who will do the prosecuting, though? (Maybe some guy wanting to advance past this idiot up the government ladder.)

☮
M
PS
Charge him with brandishing - I doubt there's a "being in a courtroom" exception for that (it's probably an aggravating circumstance).
Burn It All Down Better
PS Comrade kommissar Soros and the CPUSA/CCP comrades collective are scraping the bottom of the barrel with this prosecutor who should work as the firearms expert for the greatest thespian ever known as Alec Baldwin. (sarc)
They have no bench because the Long March to burn it all down better is almost complete.
MBlanc46
PS I don’t know who is on the jury, and haven’t seen any photographs of the jury, but, based on the demographics of southeastern Wisconsin, I’d guess that not one of the members has a clue about the principles of gun safety.
The Alarmist
PS

Perhaps the one person I’d like to see have an Alec Baldwin moment more than Alec himself.

Not that I want any innocent people hurt. Maybe he could have drawn a bead on his Drew Carry lookalike colleague before pullng the trigger.

Actually, the people staring down the barrel have a solid case for pressing assault charges against the prosecutor, as this move either by knowing intent or gross negligence to put others in a position of fearing for their safety.