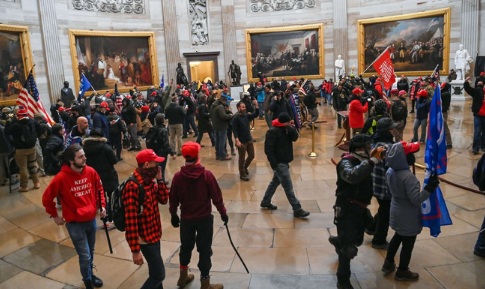 It fits in well with the subject of this post that I could not easily find a picture for the top that showed the 1/6/21 protestors being arrested, jailed, or perhaps visited in jail? Why no pictures?

I'll tell you why there aren't easily available pictures. I doubt that there was any chance for family, friends, and other supporters to even have a chance to talk to them once "our" Federal Police Force got ahold of each. Peak Stupidity has written hardly anything about the plight of these patriotic Americans who did nothing more illegal and dastardly than trespass on Federal (well, "OUR") property. We had posts about the event itself (see Patriots Breach the Senate, The Battering of Sick Nick, No Justice for Ashlii Babbitt, and Murderer of Ashli Babbitt revealed: Michael Leroy Byrd), but nothing about what's happened to these Americans.

That's out of sheer disgust at the evil we see now in the Feral Gov't in the Washington Federal Shithole. The idea of the site is to write about stupidity, not so much pure evil. They do go hand-in-hand a lot though. Here's the basic formula (derived, I gotta assume, from Newton's Laws of Motion or the 1st Law of Thermodynamics as almost everything else is): Stupidity + Power = Evil.

There was a post going around the web recently containing a letter that is supposed to be from one of these men stuck for months now without trial in jail in Washington, F.S. Maybe someone else here can tell me if it's legit, but I have no reason to doubt the extremely poor treatment of these prisoners, health-wise and Constitution-wise. This is more 3rd-Worldly behavior here, much more important to those involved, of course, than my experience among the 3rd-Worldly crowd at a fast food joint.

I don't know how many Americans know what's going on there. Washington, F.S. is filled with wanna'-be Woodward & Bernstein media types, so you'd think a few of them might be on the egregious story for us. Nah. I they had a story about people held under conditions like this in El Salvador or Peru by the right-wing, we could read whole articles in the NY Times or Washington Post about it.*

Why are the no big protests on the streets about this by American patriots? My quick answer is that most American patriots have jobs. Back in the 1960's there'd be crowds outside the jail building all hours of the day and night. It'd be one big protest party, till they let the guys out, which they would.** The divide between left and right aligns pretty well with the line between Americans with real jobs and those without.

Will Americans (and I do include myself here) get out in mass rallies for the January 6th political prisoners? It's sad to see it written about this country, but there's no way around it. These people are nothing other than political prisoners.

Back in the day, the music artists of the left, which are, say 95% of them, would get political in their songs. If one just listened for the music (as to Neil Young's guitar in Cortez the Killer), it didn't matter. However, I remember one particular with a theme about those poor political prisoners or missing children down in ... wherever. That one was U-2's Mothers of the Disappeared. I DID listen to the lyrics of that song. Would U-2 ever be so kind as to write a song about America's political prisoners, stuck down in a dungeon in the capital for daring to trespass in a government building?


* That's not to say I'd ever get it directly from those outlets of the Lyin' Press.

** The left knows how to do Constitutionality, when it helps them out, that is.

The easiest way to see new comments is:

https://hailtoyou.wordpress.com/comments/
Moderator
PS: Mr. Hail, I will finish your comment shortly. I am curious as to why you didn't make that a separate post. In addition to newer posts, I have been looking for newer comments on your blog (on the right side), but may have missed this one.

About the liquor, we are not drinkers in my family. The doctor told me I can't drink any more. I mean, I don't have to drink less, but just not any more than usual. No, really, I have lots of stuff stocked up from good deals at the duty free store. It's for gifts or SHTF currency.

I hope Kyle's acquittal has shifter the SHTF time a few years into the future. Financially though, I don't know... no stopping it.
Moderator
PS: Thanks for the comments, T.I. 41 months, and what'd the antifa people at Trump's State of the Union get? Nada?

Then you see the friendly relationship that Alarmist mentioned in his post - too disgusted about it to read the BBC.

As for the equation, yeah, if it doesn't work when rearranged, then I suppose it was derived wrong. "Math is hard - it's harder when you're stupid." [/John Wayne] ;-}

My local store is running a special on Absolut 0.7L for €10.99 ... I think I need a couple cases to prepare for the Russian invasion NATO keeps telling Europe is imminent.

Actually, I need to lay in a few chords of firewood for the cutoff of natural gas, which is the more likely outcome as a result of EU stupidity towards Russia. Even Putin has limits to his patience.
Adam Smith
PS: Cheers to your health Mr. Krug,

I too visited the liquor store yesterday.
Scored a bottle of Evan Williams 1783.

Stupidity = Power - Evil doesn't make any sense to me.
However, Power = Evil - Stupidity makes a whole lot of sense. I like this equation best.

I guess what I was trying to say last night is that powerful people exploit the stupidity of the general population to do
evil things.

Some data summarized and synthesized from anti-vaccine figure and tech billionaire Steve Kirsch:

(if the link is hard to copy, go to HailToYou dot wordpress dot com, find "Uhlfelder" post, and ctrl-f for "Kirsch").

- Best data now available, per Kirsch, suggests children are around 100x more at risk from getting the wuhan-corona vaccine than from the virus itself.

- For adults, spanning all ages and conditions, deaths induced by the wuhan-corona vaccines may now be on the same order of magnitude as deaths from wuhan-corona,

- this effectively means the vaccines were a big tradeoff in lives. That means killing off some who would have lived in exchange for saving some of the most at risk who may have died.

- When all is said and done, the vaccine deaths may exceed the virus deaths and likely have already done so, as of this writing, in quality-life-years terms, and possibly several times over.
Robert
PS: Mr. Smith, I am going to go with our esteemed moderator on this one. I would hate to think that

makes sense to me.

But then Barbie was right, math is hard.
Adam Smith
PS: Good evening everyone...

It is not only difficult to understand, but almost impossible to believe, that only a small fraction of mankind produces most of the evil, while virtually all the rest of society voluntarily allows it...

Evil will always triumph, because good is dumb.

☮
MBlanc46
PS This is about sending the rest of us a message: “Resistance is futile”.
The Alarmist
PS

Maybe they can get this sista to do The Insurrection Rap:

The problem with the 6 Jan crowd is that they didn’t have personal relationships with Congress-critters or Capitol Police. This from a BBC report on why Code Pink protestors don’t go to jail for protests inside the Capitol:

The Senate and House committees have their own rules, and some chairmen and women are more lenient of protest than others. People such as Benjamin and her co-activists who demonstrate in a hearing will be removed, by force if necessary but typically with their co-operation.

Their names are run for outstanding warrants, and they are either told not to re-enter the hearing or, depending on the rules of the committee and the specific behaviour, arrested and charged with disruption of Congress or another violation.

But by and large, Benjamin said she and her fellow activists have a sort of working relationship with the officers, who often greet them cordially as they wait in line outside a hearing room in the morning.

"We respect each other, we even like each other," she said. "There can be a bad apple here among them, just as they probably think the same about us.

"They see us in the morning and they start laughing and joking and say, 'Give me a hug now because I might have to arrest you later.'”