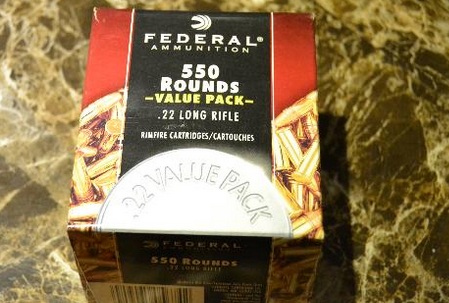 OK, it's not been quite 22, as Peak Stupidity arguable has15 different products/services in our more specific posts with the Inflation topic key* at this point. (Many of the posts have more general discussion of price inflation.) No, what I mean here is dot-22, as in .22LR rifle cartridges.

.22 "long rifle" rounds are ubiquitous. Being not very powerful, and with a 40 grain or so bullet, they are not the best for hunting or self-defense. However for fun (plinking) and general practice, they have been the cheapest thing around, almost a non-issue in the cost of shooting.

I bought a .22 rifle for $90 from K-Mart roughly 30 years ago. At that time one could get one of those milk carton style containers with 500 rounds, and sometimes a bonus 50 rounds with it, for $10 to $12. That's around 2¢ apiece. That 90 bucks for the gun was significant for me (a function not just of the year, but of my age and employment status). 2¢ a round? That was not a factor. I remember shooting out in the desert in the West, and WHAT to shoot at was more pressing a problem than how much I could shoot.

Going back only 10 years, maybe even slightly more recently, you were gonna pay about $20 to $25 for the same 500 or 550 round milk cartons. (Others companies package them in those "bricks", conveniently 10 small boxes of 50 - very organized.) OK 4¢ or 5¢ each, not a problem. I could more easily pay that anyway due to my life at the time.

During the political years, either after election time or during another hoplophobic push by the ctrl-left, the prices on all ammo would shoot up at the gun shows. I'd try to wait that out. I don't think the latest increases are temporary though. The 800 round box I just got worked out to 15¢ per cartridge. When I think about it, it's still amazingly cheap for what you're getting, thanks to industrial automation. Still, they cost 7 times as much as 30 years ago!

However, let's work out the numbers again, with the help of the Money Chimp**. 2¢ in 1992 up to 15¢ in 2022, right at 30 years later. With compounding that's 7% average annual inflation. That's a decent amount higher than the 4-5% Peak Stupidity has come up with for many products and services. but it's in the ballpark. I'd do other ammo, such as .223, but I can't remember for sure what I paid 10 years back. (I'm usually very good with that.)


* Speaking of which, I did just now add Guns and Totalitarianism, and there are 2 more I will add today after they come back into my head. Yeah, nothing is under either of this new one course - adding them is easy, but backfilling them takes a while. Ooops, I already HAD "guns". OK, it still looks right.

I remember more than a few of us predicting that $7 Trillion borrowed into existence because money printer go Brrrr would cause inflation, but somehow “we told you so” doesn't seem to matter in 🤡 🌎.

“I don't know that any of the early Anti-Coronapanickers predicted an ammunition price spike, exactly, but it's the kind of thing that was predicted in outline.”

I used to be able to buy ammo at my local walmart, but then the Black! Africans in America got really angry and burned down a few cities, and now walmart doesn't carry ammo anymore.

It’s an oversuplly of money combined with an undersupply of actual goods and services that is driving the bulk of inflation. The spikes in demand (so-called pent-up demand) serve to make it obvious, but there is so much distortion across all markets that one cannot reliably chalk it up to demand alone.

The feds have been buying up huge lots of ammo ... yes, that is demand of a sort, but for the rest of us it is a reduction of supply, so our demand and increased money supply are indeed chasing fewer goods, which was what most persons of common sense recognised as inflation prior to expert economists stepping in with their BS theories and confusing the issue.

Look at the meat market. There’s plenty of cattle farmers/ranchers would like to get rid of at the moment, because it’s too expensive to feed them, so you’d think beef should be getting cheaper, but there’s a severe constraint on processing (nice way to say slaughter, butcher and pack) the beef and get it ready to go to market, so processing is getting pricey. Then there’s the fuel to get it into the markets. And then there’s the $15 or more for relatively unskilled labour to get it on the shelves and rung at the register because the government made not working a better paying pursuit than working.

Don’t get me started on globalism, suffice it to say that a country that picks fights with the countries that supply its raw materials or produces its goods is essentially pulling down its pants and begging to be raped.
Hail
PS

It seems some economics blogs trace the price rise to "the pandemic."

That's a euphemism, of course.

The lockdowns, the panic-pushing, the Panic itself as social phenomenon, and then the riots of mid-2020, all caused surges of demand. In a free-market system, that pushes prices up. The price rises align with the lockdowns or follow-on events from the lockdowns like riots and the whole "mystery mail-in ballot miracle" election.

I think this counts as another "we told you so."

What "they" (Coronapanickers) did was bound to cause destabilization of things, and when you unleash such demons on the public it's hard to guess where they go, but you know they will get up to evil deeds somewhere. And they did. I don't know that any of the early Anti-Coronapanickers predicted an ammunition price spike, exactly, but it's the kind of thing that was predicted in outline.

Some of these economics blogs also point to consolidation in the ammunition industry, with now two mega-corps controlling the US market (each one managing several 'brands' of ammo), and are able to engage in cartel policies. There is a considerable barrier to entry given how technically complicated ammunition manufacturing is. But a price spike of this kind in peace time should not have happened, and would not have happened, absent the whole Virus Panic thing.

(Above is summarized from a handful of economics blogs and de-euphemized.)
The Alarmist
PS

@Moderator, that thingy where your two silver dimes morphed into mostly copper back in ‘64 is called a pair-of-dime shift.

BTW, the current composition of dimes probably makes even those worth more to melt than their fiat value. They can’t get us on CBDCs fast enough. They don’t want us to recognise how badly they’ve screwed us, and the melt value or shave value of a country’s coinage relative to its official value is a very reliable indicator of how bad it is being run. The last time I bought a can of Coke®️ in pre-Euro Italy, it cost something like four thousand Lira.

Moderator
PS: That illustrates why I don't believe the BLS numbers, Mr. Hail. (I don't just on that one item, but most things that I remember numbers on and do this calculation on.)

Regarding gasoline, taxes add another aspect to it. How much of the 25 cents or 35 cents per gallon in the early 1970s and before were tax? They go by the gallon on that and ramp it up when gas is cheap.

Let's look at that 2 silver (actual silver) dimes method, as in comparing how much silver it takes to buy a gallon compared to the 2 pre-1965 dimes that could pretty much buy a gallon back then (maybe 0.85 Gallons?). Those 2 dimes had about 0.145 troy oz. Right now, the spot price of silver is $25, though good luck getting some for that!) Those 2 dimes have $3.60 worth of spot-price silver in them. Add the tax, and bingo, your 2 silver dimes can buy a gallon of The Precious, I mean, if you were to magically meet up with a clerk at the store who understood ANY of this.
Hail
PS

The US Bureau of Labor Statistics Inflation Calculator claims there has been an exact doubling of prices between Oct 1992 and Feb 2022.

What happens if (when) gasoline hits those kinds of numbers?
The Alarmist
PS

Bullets can be worth more than their weight in gold in many situations.

Having said that, I’m pretty price insensitive in things like keeping my skills polished. Back in January, I unloaded 100 rounds of 9mm into a few targets using a rented Glock 17. The whole thing came to $59 and change, including sales tax. It never occurred to me to ask how much the ammo cost ... I was having too much fun.

Now that I think about it, it must have been a bad habit I picked up in the Air Force. I don’t think I want to know the total tab for all the ordnance I shot off back in those days.

Stock up while you still can.

Moderator
PS: Ahh, yeah the bullet weight. Thanks, CB. I should have thought harder when I was writing..
Cloudbuster
PS 40 grains is the typical bullet weight. You can't fit anywhere near 40 grains of powder in a .22 LR shell. There's about 2-3 grains of powder in the case.
Moderator
PS: Agreed, Mr. Blanc. The financial destruction (of the US Dollar) has been accelerated.
MBlanc46
PS Things were probably on the way to a bad place economically before the Ukraine war. Now that Totally Legit Joe has declared economic war on the Russkies and the Chinks, it will more likely be insanely bad.