Yeah, this is probably the biggest silver lining in that gray stratus cloud of Totalitarianism we call the Kung Flu PanicFest. One can find others, but when it comes to opting out of the American branch of Globohomo, getting the children out of Big Ed is one of the most important things patriotic Americans can do right now.

Peak Stupidity has called this "Poking the Beast in the eye with a big stick.", as described in a 3-part series. See Part 1 - - Part 2 - - Part 3. At the time of my writing those, 4 years back. I thought of “the Beast” as the US Feral and other governments. I think the Beast is more than just that, as described in certain books most homeschoolers have read.

A couple of days back, the Instapundit site had a link to one of the PJ Media* writers, one Paula Bolyard who wrote Public Schools Are Cesspools of Debauchery. Get Your Kids Out Now, Before It's Too Late. on April 1st. Unfortunately, this is no April Fools Day joke, this genderbender stupidity and all the rest of the debauchery. 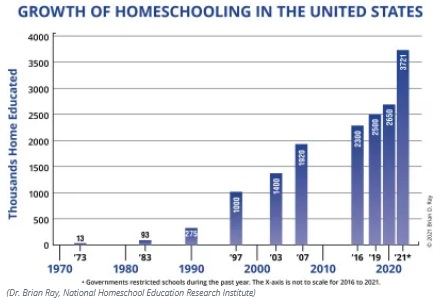 (Bar graph is straight off of Mrs. Bolyard's article.)

Though extremely encouraging, the rise from '19 to '20 is open to question, as, how would one have answered a poll about it in Spring through Summer of '20? Then, the increase to '21 is the big one, but there were still kids home during that Spring in some places. They were doing Big-Ed's "remote learning" stuff, so that would not be considered homeschooling by me, but I don't know how people would answer the poll on this.

The Kung Flu PanicFest started the big trend in awareness of the homeschooling idea since the kids were sent home. While figuring out what to do with their children, parents who didn't exactly keep up may have asked a lot of "is that what you spend 1/2 the day on over there?" type questions. It's not like we were totally ignorant of the time and money wasted at the Government Schools, but still, see our post Arts & Crafts from early on in the PanicFest for my reaction.

Then, there's the vaccine. When it comes to health tyranny and their own kids, parents get a little bit more motivated. I can't believe they are still pushing the vax, but yes, Gruesome Newsom of California announced last October that the State would require Covid-19 vaccines for ALL students, from Kindergarten on. Last I checked here (in late January) that still holds. That's their story tyranny, and they're stickin' to it! California is a big State with over 6 million school kids. I hope lots of the parents pull those kids out.

Now, there's the most recent and most extreme genderbender stupidity going on. This part is not Kung Flu related, but it's another impetus for parents to do something, now! John Derbyshire, always entertaining, and a great writer, says: "Is Disney’s Karey Burke A Space Alien? the Ruling Class Have Plans for Your Children (If You Have Any)". Keep in mind, Disney is not just about theme parks that you can avoid and Governor DeSantis can threaten. They are into so much media material, and lots of it gets into the schools.

Genius Times (with h/t to Mr. Adam Smith) shows us the new, woke, gender-aware mascot to represent the great family entertainment that is the Disney Corporation**:


Want to join my club? 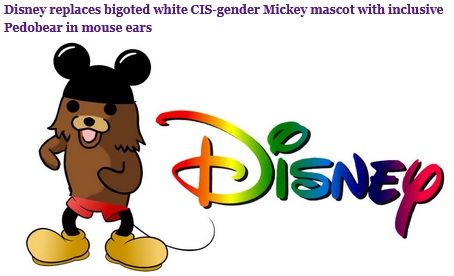 It's not all bad news out there. This is very encouraging! Homeschooling is part of how we separate. It may be hard to have a geographical separation of normal Americans from the Globohomo. We can separate in other ways though... (material for another post... getting backed up in here!)


* Instapundit promoted PJ Media (name comes from "Pajamas Media", as in, bloggers and reporters in pajamas beating all hell out of the Lyin' Press, truth-wise) long ago, and I think they are somewhat related. Some, if not all, of the other bloggers on Instapundit write columns under the "PJ Media" banner and URL. Paula Bolyard is, in fact, Managing Editor of PJ Media, I just found out.

** I know you would't have wanted your name associated, Walt, so I left it out.

"government" skool was abusive and horribly detrimental when I went, I can only imagine how much worse it is today with armed government workers roaming the halls with their drug dogs and transmadness and other woke insanity in the curriculum.

It's encouraging that more people are choosing to homeschool. Unfortunately, as Mr. Blanc points out, most parents have to (or feel they have to) send their kids to the local state funded day care/indoctrination center.

☮
MBlanc46
PS Few things would make me happier than a mass exodus from state-funded schools, but don’t count your chickens. As our gracious host points out, for most people, schools are simply state-funded day care. With women forced/conned into wage labor, it’s the rare family that can afford to free a parent for educating the offspring.
Moderator
PS: Modern kids will be all for the "less fun" stuff, when a nice job at it gets them 2 or 3 extra hours a day of time for other activities. Then, there's not much peer pressure at home.

I guess it does depend on the parents, SafeNow. Many simply want 13 year-long taxpayer-supported daycare.

Silver Lining, yep, the kids were sent home on sort notice with no plan by the District. That worked out good, as parents had a chance to see exactly what their kids SHOULD be doing vs. what they had been doing.
Always A Silver Lining
PS The COV-LARP revealed the Long March CPUSA curriculum of the comrades to the parents and the hate Whitey agitprop of the 1619 mental midgets.
SafeNow
PS

The criticism of public schools always seems to be directed toward their ideology. Correctly so. But I will add this: I think the teachers are not very proficient, because they use non-traditional, fun, woke methods, and as a result, students do not learn as well. Parents considering home schooling might be intimidated, because woke critics tell them they are not highly trained in state-of-the-art methods. But traditional methods work best, and a parent does not need to be a trained educator or rocket scientist to use them. But will modern kids sit still for the less-fun stuff?…modern kids are different. And, this less-fun problem is compounded, because it is not a teacher, and peer pressure, telling them to do less-fun learning.