Stupidity does not stop at the California coastline 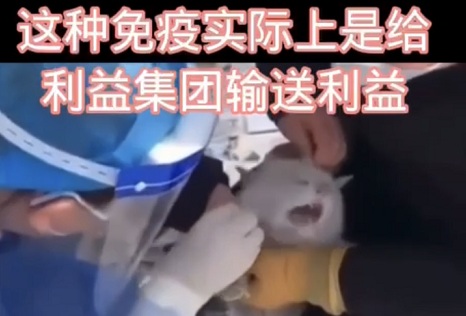 My China source showed me a video yesterday of some of the stupidity that is going on across the whole Pacific Ocean from California. That's a long way, even on the Great Circle route. As we explained in It's baaaacck! The Kung Flu in China., it's not over over there, by any means - the PanicFest that is. (Were we getting along as nations still, in China it would not be the virus itself that would worry me any, but the associated stupidity, increasing as I write, would.)

Unfortunately, I did not find a way to present the video on this site. The 4 images here are screenshots from that Chinese video, the narrative having been explained to me by my source. I'll explain later a theory of why Shanghai is being picked on specifically by Pres-for-Life Xi for the worst of this new Kung Flu stupidity. It's a city 3 times the size of New York City in population, and the authorities are re-tyrannizing the place in search of those annoying, meddling Covid-one-niner germs.

Chairman Meow above doesn't have a choice, but the Mao's, Dengs, Jiangs, and Xi's do not like to lose face. They WILL DEFEAT the Kung Flu for good, with this latest effort, or someone's gonna pay - that's the Chinese way. It's not just the Shanghai population paying under tyranny over the last few weeks. This video shows these Chinese authorities testing everything and anything. I couldn't get a good screenshot, alas, but in the beginning one of the hazmat-suited fellows got up to the roadway to swipe a truck.

Well the truck doesn't care, but how about fish? Like bats, I guess they could spread the Kung Flu around, but just stop undercooking them, people. 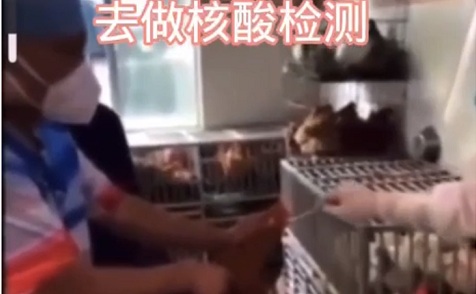 He doesn't look happy. There's got to be a Chinese "why'd the chicken cross the road" joke in there somewhere.

And then there's Chairman Meow. This picture is from the actual sampling for possible Kung Flu germs. The one above shows what cute little Chairman thought of this PanicFest a few seconds later. If you really want to rub the whole city of Shanghai's nose in Totalitarianism, you fuck with the kitties. 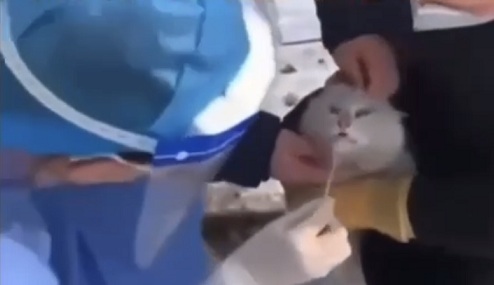 I was told that a combination of PanicFest discussion and kitten photos would break the whole internet today. We'll see. If it doesn't work, we'll try to get some video of the CCP's likely next step in face-saving Kung Flu stupidity - swiping all the strippers. Yes, I will do my BEST to get video - TOP PRIORITY!

Americans should be forgiven for believing that the highest levels of stupidity exist within our own borders. We think we are an exceptional nation, even when it comes to stupidity. However, that is a pretty xenophobic point of view. The stupidity levels are highest in the West, but that doesn't mean we should ignore the Orient either.

Yes, China is a can-do country, we no longer are, and their economy is eating our assets alive. Still, look at the Kung Flu re-Panic going on, and tell me they can't be stupid too. With our being outdone in almost every way by China over the last few years, we have an advantage over the Chinese. See, the CCP and government over there have much more control over the people. Americans are still more in control of our fate. That may be fleeting...

Well, that title has put a song into my head just due to "California coastline". How about a tune from just as the serious stupidity was being implemented here, when California was still the freest place the civilized world had ever seen? The Beach Boys released this tune, off of Wake the World (uh, oh! Not what you think, though) in 1968. Not to be confused with a Steely Dan song with the same title, this is Do it Again, another of the bands songs praising the glory of the California Beach life of over 50 years ago. From a TV show in Germany:

Bruce Johnston and Glenn Campbell sang with the band on tour too, and Brian Wilson didn't tour for most of the band's lifetime. If it was1969, that has to be Brian Johnston.

China Cat Sunflower will have to go with another post.

PS: Our title on this one was taken from one of the stupidest quotes - and they are legion - from ex-President George W. Bush. During a press conference in January of '05, he told reporters:

I want to remind people that family values do not stop at the Rio Grande River. People are coming to our country to do jobs that Americans won't do, to be able to feed their families.

The "Big River river", huh? Is that the best Spanish out of that dolt? Well, Peak Stupidity has refuted much of this already, but I'd just figure family values would include keeping families together, wouldn't it? Our country has been letting, and even encouraging, just the opposite to happen for half a century.

Moderator
PS: Thanks, Alarmist, I read that NY Post article a little while ago. Yes, what torture! Sick. I wonder if, had this story become widespread, the whole NIH would have been attacked. Westerners don't like to see animals treated like this.

Coincidentally, there's a lady who's originally from Tunisia (via Germany and an American husband), who is the biggest pet lover in the neighborhood. Her cats get treated better than some kids. She brings the dogs to the park for the kids to play fetch with and even to the elementary school occasionally when it lets out. However, she ain't your Mullah's Tunisian. She's a Christian, completely un-PC, and we're on the exact same page on immigration, Trump, wokeness, everything!

Unfortunately, people like that... well, she has no kids herself. (Maybe she couldn't, but I don't know...)
The Alarmist
PS

Beaglegate was big news that was ignored or “fakt-chequed” away last autumn.

https://nypost.com/2021/10/27/fauci-slammed-by-beagle-organization-over-alleged-experiments/
Moderator
PS: Thanks, Mr. Blanc. Dieter Kief just steered me to this very same post 54 minutes before you provided me with this link. (In the next post.)

I didn't notice this guy had any answers though. I say it's face-saving politics, that's all.
MBlanc46
PS Here’s a link to an analysis of recent Chinese Plague Panic:

Moderator
PS: Mr. Smith, I was about to take advantage of your helpful offer, but I think I can put in on here after all (not sure in which browsers it'll work right, so feedback would be appreciated). It'll be in the next post, today, along with discussion on what Mr. Blanc, the Wizard, and Alarmist discuss here.

BTW, what was the deal with the beagles, Alarmist
The Alarmist
PS

Maybe the ChiComs are running another psyop to goad the leaders in the West into following their lead, once again, and thereby fully implode the economies of the West ... as if they weren’t already imploding. Do you hear that voice? That’s the fat lady singing.

BTW, swabbing cats is way more humane than what Fauci’s posse did to beagles.
WizardWhoKnocks
PS

So why are the Chinks losing their marbles over some new “variant”, whilst the knuckleheads here appear to finally twig that it’s happening, there’s precious little they can do about it, and it’s not all that bad, after all?

At first I though It was because the PRC was in on the c19 scam, but it's not just that, yellow people may be paranoid when it comes to disease.

MBlanc46
PS My general impression is that the Chinese leadership have their heads screwed on much more tightly than the American leadership do. In fact, calling American leadership “leadership” is a solecism. So why are the Chinks losing their marbles over some new “variant”, whilst the knuckleheads here appear to finally twig that it’s happening, there’s precious little they can do about it, and it’s not all that bad, after all? Early on—late winter 2020—it was put about that Asians have some biological difference that makes them more susceptible to the critter. Could that have something to do with the Chinese response? It just jolly well better not give Our Betters any ideas. I’ve really had quite enough of their nonsense already.
Adam Smith
PS: Good evening, Mr. Moderator...

“Unfortunately, I did not find a way to present the video on this site.”

The communist kung flu panickers should leave the cats alone.