Why can't they do this at the golf tournaments? 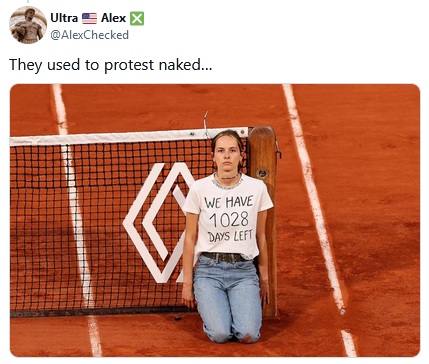 Yeah, that'd have been nice. I think her body is betta than Greta.

P J Media's Robert Spencer reports on this happening at the French Open tennis tournament. I gotta say that I haven't watched much or played much tennis since it was a really big thing from the mid-1970s to mid-'80s. The killing of the planet wasn't really as big a worry as it apparently is now, but one might have expected a girl tying herself to the tennis net to protest Disco music perhaps. She probably wouldn't have been naked even then, but those tennis skirts used to be pretty revealing ...

In his report, Mr. Spencer says that the young lady (20 y/o) stayed out there for 15 minutes while the two tennis players hung out in their locker rooms. He also says that It appears that “the science” is growing shriller and more apocalyptic.

Indeed. 1048 days goes by a lot quicker than in the days I was out there on the clay court. We are supposed to be using the Gregorian calendar, but my State Farm Life/Health/Auto calendar gave me the same deadline date anyway, March 27th, '25. Be ready for something. If you see the Peak Stupidity blog disappear from the internets that day, you can be assured that this young lady was not talking out of her ass or either we got tired of continual price increases from GoDaddy.

I want to know why these people can't protest on the golf course, laying naked in the sand traps on TV instead! It's the most boring sport imaginable to watch on TV, and, you know those people are killing the planet in some way ... all that sod can't be good for Carbon Dioxide levels ... wait, I'm not a biologist, so I'm not sure, but I do know a girl that might look very fetching when naked in a sand trap when I see one.

OK, this kind of stupidity is on the harmless side - a good way to end the blog-week. As a word of warning, Peak Stupidity will have another Georgia Guide next week, in order to fulfill our contract. Other than that, I don't have anything much in mind right now. That'll change by Monday or Tuesday. The stupidity must flow.

Endgame Is Now
PS Update-It is the Defense Production Act probably a relic from the comrade commissar FDR (CCCP) era when leviathan gov was enshrined.
Chester Arthur made the administrative state after Garfield was assassinated by a disgruntled former apparatchik.
They are the Deep State who will get us all roasted under a 7500 degree mushroom cloud while they skate off to the taxpayer funded bunkers.
Plan Accordingly
PS Heads Up, JoJo Bidet has enacted the emergency powers act to fundamentally transform away from fossil fuels.
External enemies will wait until the CPUSA (D) have left nothing but a smoking crater of egalitarian ruin before the hostile takeover.
Moderator
PS: Haha, Mr. Blanc. I mean not funny about the monks (as I remember some of the pictures), but yes, that'd be putting their carbon where their mouths are. (And I could use some more ash for the garden.)
MBlanc46
PS Vietnamese monks would immolate themselves to demonstrate their unhappiness with things. I wish that our “climate activists” would follow their example.
Moderator
PS: "Don Juan's Reckless Daughter" was Joni's way of saying (just the title, I mean) that the girls could fool around just like the men - not sure how it worked out for Miss Mitchell. About this song, which you have linked us to before: It's kind of typical of her - a decent tune and very good lyrics, with the lyrics that don't fit jammed into the tune, making the tune not as good ...

Thanks for this again. Her lyrics are about the bleakness of the Canadian plains where she grew up and the Indians left there, etc. Pretty interesting.

That was very interesting about the Danube-Swebians too, of course. This Johann Albrecht Bengel died in 1752, so he didn't have to worry about either of these dates. That sure made it easier on him.
Dieter Kief
PS - Some Whitsuntide not least remarks about the advantage of precise doomsday predictions as featured by the young woman above (and Albrecht Bengel below), who sticks her head out of the crowd.

1) By giving precise dates, you allow yourself to correct your thoughts by being undoubtedly wrong in just about - ahh - thx Adam: On exactly Thursday, 27th of March 2025! - Advantage facticity! So - seen in this mild Christian light of forgiveness and self-humiliation, she might be understood as being - - no lost soul at all!

2) I've posted this before, but the whole business of doomsday prediction making is one of the more manifest human ways to - make a fool out of oneself. I'm always interested in such - as it seems: anthropologically stable - exact ways to  fail! - So here comes one of my most beloved calculators and propagandists and - - thinkers in this perfect realm for human deceptions and self-deceptions: The very field, where the mind is inclined to bewitch itself, as Ludwig Wittgenstein put that one in a rather surprising manner (for most of his mathematicians/ logicians/ pupils contemporaries and colleagues that is, who were bewildered to read the great Ludwig doling out such cryptic thoughts about - whitches 'n' stuff...) The Wittgensteinian leaning Austrian-Californian thinker Paul Feyerabend (Against Method) did show a knack for - Carlos Castaneda, who wrote a series of - - - anthropological fairy tales for grown up readers about the Mexican sorcerer Don Juan, - who's (spiritual) offspring Joni Mitchell declared to be on the (great!) double-lp Don Juan's Reckless Daughter! - - - But now to one of the predecessors of these Thinking 'n' Singin' Contemporary Heads - - - the one and only Black Forest polymath and - - - Great Visionary Mathematician & Theologist of the European Future in a rather Faustian vain: Albrecht Bengel from the Alpirsbach monastery.

Widely praised Christian polymath genius Albrecht Bengel from Alpirsbach in the Black Forest figured out in long and detailed calculations that the world would end in 1809. But he did retract his calculations just in time before this year arrived and then said the Apocalypse would occur in 1836. - But he added (he was a through and through Christian thinker, mind you): Those ready to leave the sinful German and Middle European countries and willing to settle in the east, along the Danube, would be exempted from the deesasterous turmoils and firestorms that would take hold of and finally destroy all of Northern Europe. Lots of people (thousands (!) - the Donauschwaben (Danube-Swebians), as they were later on called) followed his advice to escape the big style mishaps in safe Hungary, Romania etc.  And - did survive indeed and were happy ever after kinda, to end with a Grimm-note here! Some infos and a portrait of the inspired & benign fool... Albrecht Bengel - -

Here is Joni Mitchell from Don Juan's Reckless Daughter with one of her most outlandish songs ever (lots of - quite Whitsun-appropriate transcendence in it - and the biblical snake-panic somewhat - tamed, or better: Calmed down...)

NwFD, I do remember Spencer's Gifts from the days I didn't hate the mall so much. That brings back memories.
Now With Fortified Democracy
PS Greta and Spencer, oh my.
Almost as fun as the Grand Old Politburo/CPUSA kabuki.
Spencer gifts was a fun novelty store with canned farts and the peanuts container that shot out a foam snake.
They had the faux soda can wraps for those that liked to drink and drive.

At least John Durham and Sarah Palin will save us and maybe Shrubya Bush will let them use the hurricane driving machine to save muh climate.
Dominion and SmartMatic already saved muh democracy.
France? Bwahahaha! Thanks I needed a good laugh.
The Alarmist
PS

An ice storm? In March???
That would be truly apocalyptic!

Lol about the Kool-Aid...

Off topic, except for the stupidity...

Bees are fish, US court declares

“although the term fish is colloquially and commonly understood to refer to aquatic species, the term of art employed by the Legislature in the definition of fish… is not so limited.”

☮
Moderator
PS: Well, Adam, this is supposed to be about the Climate Crisis™, so I guess hurricane season will start early. (That's WAY early, but you know, tryin' to reason with hurricane season - not actually one of Jimmy Buffett's best tunes at all though.). Or, there'll be an ice storm... somewhere ... unprecedented!

I don't think the Farmers' Almanac even goes out to March of '25.

Yes, it is bad practice to give a date, but some of these cults have before. That's how you go bankrupt as a cult, gradually at first, then suddenly. Plus, even Kool-Aid has gone up, so there are no easy solutions anymore ...

Back to this girl, I wonder if she'll be making a new T-shirt each day, or just using biodegradable (I hope) white out. If something happens, I want one of her T-shirts. I'll get "I told you so!" printed on the back.
Adam Smith
PS: Only 1028 days left!

Doomday cults like the Jehovah's Witnesses have learned that you don't put a date to the arrival of Armageddon.
Turns out it's bad for business when your predictions don't come true.

What do you suppose will happen on Thursday, March 27, 2025?
Seems oddly specific to me.

☮
Moderator
PS: There's a Richard Spencer around too, Mr. Hail, but I don't know too much about this guy. I go to Instapundit, on which the bloggers link to their PJ Media affiliate very often, and I got to this guy's sarcastic article.

Whoever their Robert Spencer is, if the $PLC hates him, he must be a decent stand-up guy.
Hail
PS

Is that the Anti-Jihad Lebanese-Christian-origin guy, or a different Robert Spencer? A lazy googling says it's the same one. (I note that Google's search-results page conspicuously displays an Alphabet People Pride flag, and demands I celebrate a definitely-important person named Kiroshi Kiyomiya, a corded telephone, and said rainbow flag.)