What Were Once Policies Are Now Myths... 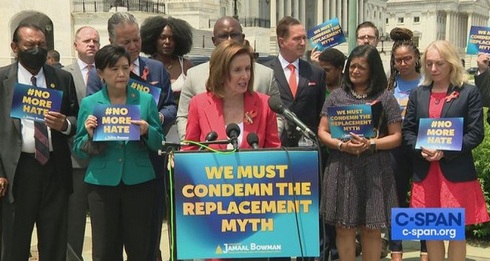 This is a continuation of our post The Great Replacement from Monday and is also related to what VDare's Washington Watcher II wrote about as linked-to in yesterday's post.

Now, Steve Sailer has done a bang up job on this topic, but he writes so much that it's usually hard to find the exact few best posts to link to. Many readers have likely heard his great snark and explanations of the hypocrisy that I'll show you here. This Great Replacement of White Middle Class America via immigration, whether neatly planned, sort-of agreed-upon, or just allowed to happen and enjoyed by people with similar mindsets, has been going on for almost 6 decades.

At first, not many people cared. It took a while to get going and to even be noticed (unless you were Steve Sailer, but even that guy ...) There's a lot of ruin in a nation*. Then, by the mid-1990s, there were pundits and politicians that were getting worried about the then 30 y/o immigration invasion. (That'd be only about 15-20 years on the illegal side, and 30 years on the legal side by that point.) Wise and worried people tried to get through to Americans (and it's not like a decent minority of Americans didn't already worry) for 20 more years, and we got to President Trump ... who let us down because he is more of a bullshitter with an ego than a competent leader. (Yes, a bullshitter with an ego on the side of patriotic Americans, but that's not enough.)

It's been 57 years of this now. Since the candidacy of Donald Trump in '15 this issue has at least been discussed in public. Therefore, the elites of America have first told us for a few years of this time that we who worry about this existential problem are conspiracy theorists. The more the Great Replacement advances and we even use that wording, we are told that it's a myth. Oh, also, to talk about it is being a White Supremacist. (Not that there's anything wrong with that.)

Why do they, and why does she, do this? It’s hard to condemn a myth with a straight face when it’s happening right now and people have cameras. Still, Nancy Pelosi manages to do this. Blatant lying is BIG now.

Yes, of course, the standard hypocrisy of the ctrl-left, living in the leafy neighborhoods while supporting Section 8 and BLM, sending the kids to the private schools while pushing for integration, voting for higher taxes while working for the government (no, wait...) is still practiced. However, all that stuff is no longer avant-garde. Now, you just tell the people complete blatantly obvious bullshit to their faces. They don't have to believe your lies, but they have to accept the lies. It's not for their education, but for their humiliation. C'mon guys, whaddya' need a refresher Frankfurt School?! it's ALL COMMUNISM nowadays!

Does the title of this post ring a bell for anyone? This goes back a long way, to a time when I didn't have money to buy record albums, or those nice big 8-track tapes. I loved the song Black Water from the 1974-released album though. About a decade later, I got the Doobie Brothers' What Were Once Vices Are Now Habits, and I've liked every bit of it.*

Peak Stupidity has featured The Doobie Brother 5 times so far, with Neil's Fandando, from Stampede, Black Water, the big hit off of this album, Listen to the Music, also from this album, and Takin' it to the Streets, title song of that album.


The album's cover picture is from a concert of theirs in Bowling Green, KY in December of 1973.

The Doobie Brothers were:

* Hey, we've used that Adam Smith, the Scottish Economist, not the American Peak Stupidity commenter, Libertarianism expert, and all-around handy-man, line before, but regarding economics. See There's a lot of ruin in a nation. - Part 1, -- Part 2, and Part 3.

** After that they came out with 2 even better ones, Stampede and The Captain and Me

"...China Berry trees, a non-native invasive species from Indomalaya and Australasia with fruit that is poisonous to humans, brought to the US by some well meaning fools looking to add diversity to their American gardens...."

Then I learned it was “China Grove” and I thought, what the heck does that mean?
Moderator
PS: I knew it was about a town in Texas, Alarmist, as I can make out the lyrics, but that was about all. This is as opposed to Neil's Fandango, a short one that I really like the sound of, but is sung so fast. I could not make out the lyrics for years, but that was before the internet.
The Alarmist
PS

The song is supposedly named after a town near San Antonio named China Grove. The lyrics delve into the hidden stories of the town, like the teacher and the preacher and a crazy sheriff who carries a Samurai sword. Tom Johnston claims he wasn’t sure if the town really existed, but he might have seen a sign for it while touring in Texas.

I’m sticking with the ontological meaning of the China Berry Tree and its analogy to invasive species in general.
Moderator
PS: That one is one of my favorites from the band, but I never knew what the lyrics were close to being about before. Thanks, Alarmist!
The Alarmist
PS

There’s that other Doobies’ song, China Grove, that fits the situation. China Grove is named for its plentiful China Berry trees, a non-native invasive species from Indomalaya and Australasia with fruit that is poisonous to humans, brought to the US by some well meaning fools looking to add diversity to their American gardens.