Current flavors of stupidity in the UK

They say the colonies and the UK* are two countries separated by a common language. Well, they said that before both were turned into Towers of Babel, anyway, but there's still some of that left. While doing the real touristy thing** this time, on the double decker bus (and the Thames River cruise), I felt that if I heard the word lit-tra-lee one more time, I'd lit-tra-lee lose my tea and crumpets off the side onto the bonnet of that lorry down there.

We took our pictures of the Potomac Regime's Pride Flag flying various places, along with the Ukraine flag, but my worst bout with the stupidity of the place was actually nothing new at all. It was right on the way out too - the security business at Heathrow Airport. Yeah, this is 20-year old stuff here, and Peak Stupidity had our say on 9/11 five years back with 16 Years of Spreading Democracy - They still hate us for our freedoms(?). I should be over all this, like other good Americans. I'm not though. 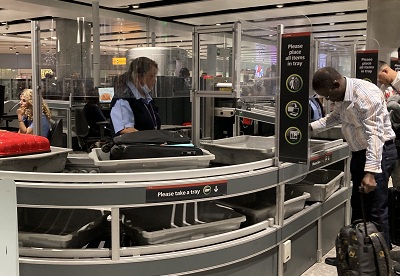 (There was one Brit sitting there - just for eye candy?)

Maybe it was that about everyone working this assembly-line madness called airport security didn't look a bit British. It was also that I was not used to as much of this being treated like a transferring prison inmate as I experienced this time. I took stuff out of this pocket, put it here and there, wondering if I'm gonna know where it all is later, and I'd just had it. "Hey, this money better come out the other side!" I told the one lady, as I stuck about $300 in American cash somewhere to be examined. I called the whole thing a "big security theater (oops, theatre) shitshow" in front of everyone there. Come to think of it, it was probably best that there weren't so many actually British people around, as they may not have put up with it.

I took the snapshot above, but it didn't really capture the mood, my mood or that of the whole #SAD operation. (There was a big crowd that one can't see.) I did tell the one lady, regarding the money, that "it's not personal. I don't like the whole damn thing" before I walked through the scanners.

I'm amazed I wasn't detained and blogging right now from the hoosegow in the Tower of London like a poorly-dressed and less-literate Thomas Moore. BTW, it's NOT a tower. I kept wondering "where's the tower?" It's a big castle basically. Who knew? I had in my head since the Al Stewart song a picture of a tower with a few cells in it.

Look, you've got mostly Pakistanis, as nice, hardworking, and trustworthy as they (most of them) might be, running airport security at Heathrow, and you still act like this stuff is serious? I can't get myself to "suspend my disbelief", as they say in the movie reviews.

Well that's all old news that had me seriously distracted, but I'll note that throughout all that the Kung Flu stupidity was completely absent. Of course we would not have, or COULD not have, made the trip 1/2 a year back when the vax restrictions were in place. (My wife didn't feel as comfortable as I would have about making up a Vaccine Passport using MS-Paint. She wanted to us to use Photoshop ... I kid ...) We knew they'd backed down on that bit. More than that, I didn't see even old stupid 6' "distancing" signs, stickers on the floor, and only some of the security-theatre employees had face masks on. I saw no signs about vaccinations. (In London itself, it was maybe 5% masked up - we didn't take a proper survey.) Customs back home was about the usual bananas and oranges again.

I'm going backwards with this trip anecdote post, so now I'll go west about 400 clicks (that's "kee-lo-me-tras" for you Yanks) to this nice town in Wales called Holyhead. There's a ferry terminal there in which one can arrive from or depart to a number of places in Ireland. A series of nice trains can take one to London.

We walked all over the small town - very tempting of a bug-out place it is, but well, this was summer-time. The grass is always greener - well it freakin' is, bloke!

I don't know how it was 2 years ago, but at least by this point, the folks in Holyhead, Wales aren't taking the Kung Flu stupidity very seriously. This sign was outside a pub: 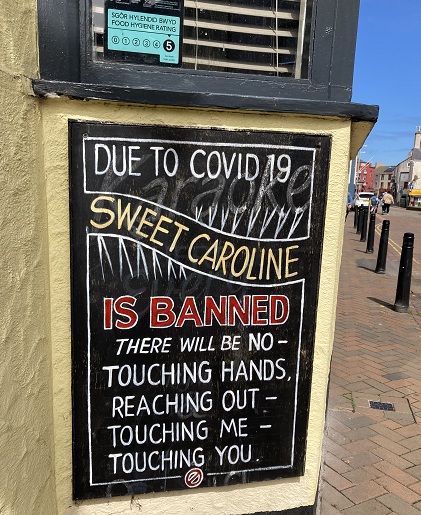 The other flavors of stupidity to be reported on from this trip to Ireland and the UK are the Wokeness and the Orwellian stupidity. Oh, and the subway , errr Underground or Tube costs out the ying-yang!

We'll get to that, along with plenty of other subjects, this week, but we've got to include the Neil Diamond song at this point. For those who listened to the music in Saturday's post, Neil Diamond also wrote a number of their hit songs. This one, Sweet Caroline is not my absolute favorite song by him - I would have sworn I put my favorite up on here early in the blog, when I'd just put music with no specific topic. It's not on here, so it'll be coming soon.

* Yeah, I know, the UK isn't a country. I am fortunate that John Derbyshire cleared this bit up not long before my family's trip over to the UK... errr, Great Britain,... WHATEVER! No, seriously, it's like this: With what's left of it, the UK includes England, Scotland, Wales, and Northern Ireland, while Great Britain just includes the 1st 3 of those.

We visited Ireland and 1/2 of the UK or 2/3 of Great Britain - we did not get to Scotland.

** Interestingly, there were hardly ANY Chinese tourists in London - I think there were more, proportionally, in Dublin, Ireland. I was surprised at this, having seen so many in all the other European and the one S. American city we visited - see The Ugly Chinaman for our experience in Rome 3 years back.

Have the tourists been having trouble getting out of China on trips? Freedom is on the back-slide over there, and one can't always go out of the country whenever he wants now. This may be actually, or just ostensibly, related to the Kung Flu madness in a number of ways. Then there is the increased animosity in the relationships around the world due to the stupidity of both the Xi and the Potomac Regimes.

For the US/China travel at least, the 10 year tourist visas have been cancelled. You may have gone through the trouble and have 5 years left on one, but so sorry, no refund will be forthcoming.

"For the US/China travel at least, the 10 year tourist visas have been cancelled. You may have gone through the trouble and have 5 years left on one, but so sorry, no refund will be forthcoming."

That sounds exactly what China would do.

This is the kind of reason to oppose the influence of China in the world.
The Alarmist
PS

There’s a part of The Tower (specifically the Keep) that would have been a very imposing tower to a twelth-century eye.

Yeah, they even have fer’ners running many of the immigration lines.
Hail
PS

When contemplating the lack of virus restrictions in mid-2022 in the UK, it's worth remembering how it happened, as it was not necessarily a natural process (just look at China, living in a paranoiac perma-Panic world of lockdowns, tests, and surveillance).

The UK government turned away from the Panic in January 2022, the earliest of any of the big Western countries.

Out of nowhere (at the time), Boris Johnson announced his government was dismantling its own Panic apparatus. Over the following about eight weeks following the "all restrictions will end" announcement, the forces of the Panic withdrew everywhere else in the West, still visible in places but a shadow of its former strength after the humiliation of the effeminate Panic-loyalist Prime Minister Justin "Bieber" Trudeau in Canada with the Freedom Convoy uprising.

Why did the UK defect from the international Panic coalition when it did (i.e., so early)? Probably because Boris Johnson was worried about losing power via a no-confidence vote, and his public announcement of defection shored up enough support that he survived the no-confidence vote, although this only bought him a few more months as it turned out.

The UK also has a lot of guilt in the Corona-Panic. Boris Johnson, Bojo--or "Bozo" at times with his addiction to publicity stunts--could have found the courage to resist the Panic all along, or at least much earlier. The sudden cave-in, about March 15, was poor statesmanship, and with the UK's move into the Panic column, other Non-Panic players ended up falling, the Corona-Domino-Effect of March 2020.
Moderator
PS: The full story on that Dave Matthews incident was en-Gross-ing, to say the leas, Adam. Thanks - now my memory is coming back to me on this.

Mr. Folsheviks, YES, Taiwan flags should be flown and waved! Lets support this other land of Chinese people who we have a huge trade deficit with and must defend at all costs using our mighty military with equipment purchased with borrowed Chinese dollars. It's the right thing
Buck Folsheviks
PS Waive the rules Brittainistan.
Being a Deep State rump vassal has consequences.
Isn't it time for the I'm with Taiwan decorations?

O/T-Emmanuel Trumpstein raided by the FIB-STASI!
Coming soon to the deplorables with the massive IRS increase?
Fading banana republics have to start checking car seats and couch cushions for change on the road to the golden socialist utopia.
Adam Smith
PS: "Hopefully, like a jumpmaster, he checked for traffic below!"

On Sunday, August 8, 2004, at 1:18 p.m., bus driver Stefan Wohl was alone in the bus of band violinist Boyd Tinsley on his way to a downtown hotel when he emptied the bus' septic tank as it crossed the metal grates of the Kinzie Street bridge.

Passenger boat Chicago's Little Lady was hosting the 1:00 p.m. scheduled Chicago Architecture Foundation tour of the Chicago River. While passing under the bridge, the boat received the full contents (an estimated 800 pounds of human waste) of the tank on the seats of its open-roof terrace. Roughly two-thirds of the 120 passengers aboard the tour boat were soaked.

According to the Illinois Attorney General, passengers aboard included persons with disabilities, the elderly, a pregnant woman, a small child, and an infant. The filing also describes the incident further:

The liquid waste was brownish yellow in color, and had a foul, offensive odor. The liquid human waste went into passengers' eyes, mouths, hair, and onto clothing and personal belongings, many of which were soaked. Some of the passengers suffered nausea and vomiting as a result of exposure to the human waste.

Mayor Daley expressed his belief that the dumping was "absolutely unacceptable", but that he believed the Dave Matthews Band was "a very good band".

☮
Moderator
PS: Thank you for the documents, Mr. Smith. Next time they want to see "Papers, Please!" I'll be ready.

My friend who lived in downtown Chicago at the time informed me of that "core dump" taken by the Dave Mathews Band tour bus. Mr. Mathews was a big environmentalist, dontcha' know. It's just that, well, he's not one of the regular people.

He really probably feels that he does so much "good" in spouting his enviro-rhetoric at the shows that it more than makes up for one little lav-dump into the river. (Hopefully, like a jumpmaster, he checked for traffic below!)
Adam Smith
PS: Good evening, Mr. Moderator,

“My wife didn't feel as comfortable as I would have about making up a Vaccine Passport using MS-Paint. She wanted to us to use Photoshop...”

“I felt that if I heard the word lit-tra-lee one more time, I'd lit-tra-lee lose my tea and crumpets off the side onto the bonnet of that lorry down there.”

This day in History...
https://en.wikipedia.org/wiki/Dave_Matthews_Band_Chicago_River_incident