The ruination of Sweden - "Finally facing our Waterloo!"

This post is purely a rant, so if you agree with PeakStupidity in general you'll probably enjoy reading this one. If not, skip it and go back to your 2nd-favorite website.

How can a whole population of a nation be so stupid as to let the nation go to ruin over a period of just a few decades? Yeah we have major problems ourselves, but, for population self-destruction, Sweden is in a class by itself.

I get it that the Vikings are long in the past, Sweden has been socialist for well-nigh 70 years, and it has been neutral in the wars of Europe for centuries. Sure, the people can get soft, but wouldn't you snap out of it when you see whole neighborhoods turning into violent other countries?

This ZeroHedge article, describes the building of a new police station in a part of metropolitan Stockholm called Ringeby or more colloquially "Little Mogadishu". It is full of Somalians and others that have no business living in Sweden - this results in the type of neighborhood that requires this hardened building:

Looks from the picture to be a great place for a stroll - NOT. (Where did the white people come from - artistic license?) 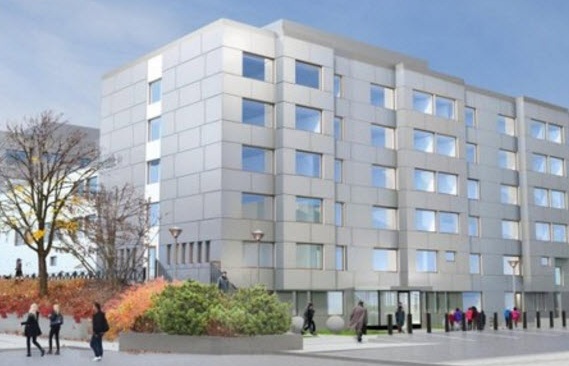 It is described by zerohedge (or the zerohedge sources) thusly:


The new police station, which is being built under heavy security and is scheduled to open in 2019, will cost over $40 million construction costs in addition to an annual rental cost of $1.6 million. The security cost for the actual construction is unknown. It is planned that 250 personnel will work there in the community of around 15,000 people. This is a ratio of one cop to 60 residents (for comparison Chicago has one cop to 270 residents).

The police station will feature bullet proof windows, walls reinforced with sheet metal, and fencing around it, possibly with electrified barbed wire. So it will look more like a military installation than anything. Also it will be designated as "specially protected," which means a year in prison for anyone even throwing a stone at it. But there are problems with the police station, as none of the largely White police working there will actually live in the community and will have to commute it. This being Sweden, a disproportionate number will also be women. This raises several problems that would not be issues elsewhere. Police officers are worried about vandalism to their private cars so refuse to drive in, while using public transport is considered too dangerous, especially for female officers.

Do most of the Swedes really not know that their country will be changed into about the farthest thing possible from 1970's Sweden? Are they really that stupid? Socialism can indeed make a population stupid, but THAT STUPID to invite in a whole population of Somalians? Maybe.

Do they not care? I guess if you are old and have no children, having had a good time in life, maybe you figure you'll just "enjoy the decline" as is the theme of one website (this is not some mere slow decline - this is violent social destruction). Well, some of the Swedes are young enough or have a few children for which they should care about what's coming.

Is it cowardice? Some Western European countries (England included) have laws against "hate speech", i.e. talk that is too truthful for people's own good. However, not everyone must be, or can be, a Geert Wilders (he needs 24-hr. bodyguards, so that's not for everyone). All it takes is a little resistance and solidarity with fellow truth-telling Swedes. They can't put a whole city in jail for "hate speech". I believe the cowardice is fear of friends/family/neighbors looking down on one, and the fear of being called names. Yes, that's pathetic. This alone is probably the reason the situation has gotten so far out of hand. Fear of being called names is what's caused this ruination! Did these people never hear the simple "Sticks and stones may break my bones, but words will never hurt me." thing during kindergarten? They couldn't have all been out sick that day.

The thing is, the country may not be doomed, but it will take much more guts and will to make an effort to get these people out of Sweden than it would have to keep them from coming. I don't think they have it in them. What will the young ones in Sweden think of their parents and grandparents 25 years from now when they're living in a Moslem hellhole that used to be a hell of a nice place?

borisputin
Not news I'm sure, but Europe is really screwed up.

I mean, come on, you have people making attacks with axes?

It doesn't get more basic or simple than that one.