As far as the movies and TV's portrayal of our omniscient Feral Government's tracking of the the bad or good guys, fighting the terrists "so's we don't have to fight them over there once we run out of money to do so", goes, last post finished with:

However, it's the people they've got all wrong. Programmers, dBA's, etc. can make all the great systems that might LOOK like the stuff on TV, but you've got US Government half deadwood, part affirmative action, part glass-ceiling-shattering employees, for cryin' out loud! Do you think they've got their act together like the people trying to catch Jason Bourne? That is not reality. Don't let them make you think this is what would be up against were you in a "disagreement", let's call it with the Feral Gov.? Far, far from it would be reality.

Again, some of it is just a really stupid naive view of reality on the part of the producers of this stuff, but there are probably elites in Hollywood and/or government who really want to create this impression to Americans.

The impression given to us: In this control room (best pic. I could find on short notice, sorry), these TOP GUYS! (and GIRLS and GAYS and BLT/G(with guacamole)) have total control and know everything they can know at the time about the "perp". They work together like a crack SEAL team. They talk fast, as every detail is important. They have jets that they can get on at a moments notice to be anywhere in the world in a day. Oh, and helicopters to land on the roof of whatever building the perp is hanging out in. They can hook up to any communications that anyone could possibly use. They stay up all night - it's a 24/7/365 TOP GUY pajama party. 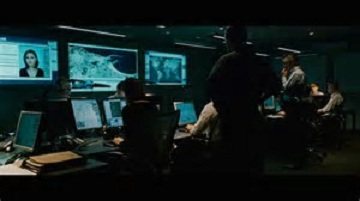 Again, have you ever, ever dealt with any of "your" government employees at the Federal, State, or local level? I don't mean to sound like an a-hole here, as I know you have, so that was rhetorical. We all know how they treat us as the taxpaying "customer". (yeah, we're the customers, like those late cockroaches are the customers of my peanut butter traps). Think about the local highway department office (DMV to some) ... oh, ... here is a pretty representative example:

How would the search for Mr. Jason Bourne go in real life, with "our" affirmative-action-hiring, nepotist, glass-ceiling-shattering, jobs-for-life US Government? Let me tell you that the movie would not be quite the same were it realistic. It'd be more like:

"We need to get that cell phone conversation from last week, from when our Asset saw Mr. Bourne at the Berlin Zoo train station." "My top man, Leroy is on it, sir, but he called in sick last Monday." "Well, show me the video, please, on the big monitor!" "That's just the big-screen TV, sir; the Indian IT guy wasn't able to get the feed on there." "This is urgent!" "Yes, we have a help-desk ticket on it - I did it myself." "Also, most of the video got erased accidentally by that new-hire chick." "That is NOT! ACCEPTABLE! I am in charge of finding our wayward asset, do you understand? I struggled, kissed ass, and performed numerous blow-jobs to get here, and I'll not have this operation brought to a standstill now!" "Yes, Maam, uhhh, I mean sir now, sorry."

"You and the team will be heading to Prague as soon as the jet is ready." "Of course, but the transportation department's 113-slash-A request was not signed, sir; it got sent back to accounting. It may be a few days." "Gas up the JetRanger to get us over to JFK." "Don't tell me, in the shop, right?" "Yeah, we're outsourcing the parts ordering and hot-sections now." "Listen, how bad do we really want this guy?" "He'll blow all of our cover!" "Yeah, but, can we push this off until the spring, after my retirement?"

Maybe not the box office success we've seen with the Hollywood flicks, but it'd be real nice if a movie were to get real on this, just the same.

Coming soon to a theater near you - The Bourne Stupidity!

Moderator
PS: I suppose I could try that next time, Jerry. In the past the experiences have been worse as I used to have to go in for some special problems (involving my driver's license or lack therof!)

For routine transferring of license plates and that, maybe I can lighten up and let them feel superior for a few minutes. I will say that our place has been streamlined a bit, and one is in a lot better mood after waiting only 5-10 minutes vs. a half hour.
Jerry
PS I’ve found that the best way to deal with nettlesome bureaucrats as in the DMV clip is to act a little dumb, slow, and sweet. Gosh, a day at their office is a ray of sunshine, getting to be around such nice folks! That way they get to feel superior, and they don’t see you as a threat. Maybe not the most dignified, but it seems to work and there is some satisfaction of the actor to be had.