No, it's NOT a "The Onion" headline, that's the problem! While getting into the airport terminal recently, a lady wanted to get this stupid, undignified, and completely unconstitutional pat-down over with to get to the flight. Yeah, I know, "Whatdya gonna do? Those 19 bad people ruined it for the rest of us." That's basically the most common thing I hear from people when I mention how sick and pathetic this whole TSA stuff is. What are we, a freakin' kindergarten, is that was America has become?

This lady wanted to get this over with, I understand that, and it's hard to fight this stuff as an individual - you end up missing your trip. However, while waiting for a "Female Assist!", she said to the guy, "I don't mind if you do it." No joking, she didn't care who feels her up, and no, she was no Phoebe Cates in "Fast Times as Ridgemont High", believe you me. 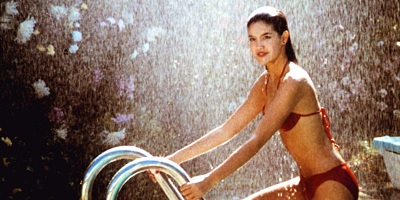 What was I saying, nobody much fights this stuff, which is why the sheeple are indeed getting used to Police State USA.

Mike Krieger's Liberty Blitzkrieg Blog puts it very correctly as Recent TSA Molestation Video Proves Americans Have Become Authority Worshipping Slaves. This is also not a particularly timely article (2 months back but newer than Phoebe Cates up there), and it's stuff most air travelers have already seen, but it's definitely worth reading the whole article, not just:

TSA treating law-abiding American citizens like livestock for the privilege of boarding a plane has been a festering problem for over a decade. Such demeaning “security” practices represent just one of many unacceptable privacy invasions we’ve allowed to happen to us as a people since being overwhelmed by irrational fears of terrorism following the attacks of 9/11. Such fears are never allowed to dissipate since they’re constantly reinforced and encouraged by corporate media, hack politicians and the military-industrial-intelligence complex looking to make money from imprisoning Americans in an all-encompassing surveillance grid panopticon where we cheer on our own enslavement.

He's got a video of a boy being patted down. C'mon, just think back to attitudes of only 25 years ago. Would anybody then think this wasn't something to start American Revolution II about? Even in the middle of Nazi Germany, this would have been shocking!


Yeah, it’s disgusting, inappropriate and anathema to a free people, but that’s the point. We aren’t a free people. We’ve become a bunch of authority-worshiping subjects toiling on a plantation dominated by multi-national companies who write our laws and manipulate our thoughts through corporate media. The worst part is we don’t do anything about it. We elect Trump and then puff our chests out yelling stupid slogans like MAGA, as molestations from the TSA get worse. Well done everyone.

Before you tell me that all this Police State fun has prevented a damn thing from happening, I could tell you how many guns get seen at the TSA checkpoint every day. Plenty go on through. Here's the thing - none of this worries me one bit. The good people are many, the bad guys will always have weapons, and were Americans not being disarmed at the airport back on that day in 2001, we would not even be thinking of that September 11th as a day of infamy, Instead, it would be a day we could have been proud to be Americans, having handled the situations in those airliners as lessons in self-defense. Our founders would have been looking down at us in approval, instead of in disgust at this current sick Police State we have become.


Buck Turgidson
Why do we still have this scourge of the TSA? The Trump administration either seems completely oblivious to their existence, or else is 100% in favor of their Gestapo intimidation tactics and Potemkin village theatrical security spectacle. The whole damned agency is a JOKE. They have not caught one frigging terrorist. They are useless. They should be zero funded and closed out, and security should be turned over to individual airports to be addressed as they see fit. Set a date 90 days out and tell all airports to get their S*** together, as the TSA is done and they are going to in charge and to spin up. This pat down, x-ray, take off your shoes, put your computer in that bin bullsc****t that they put all of us through is ridiculous, insulting, and useless. The last time I went through of course they had to screen my bag. "You have food in here?" asked some woman whose first language was not English. Yes I said, I have an apple and some nuts in there, geez I hope that's OK (I am a wise guy). She proceeded to empty the entire frigging bag to look at the bag of mixed, unsalted nuts. The poor passenger next to me had some TSA fuqwit going through her medication. You know damned well that they want to take over the duties of the DEA and check all passengers to make sure no one is carrying an extra aspirin or pain reliever. OK I guess it shows I am sick of this intrusive police state crap.

Sorry, another Turgidson rant, thanks for putting up with me, but I have had it up to here (rt hand parallel w floor 4' above my head) w the TSA.