Peak Stupidity leans pretty heavily toward liberty, but at the same time very conservative. People think that's a contradiction, but that only seems to be the case in America right now on certain issues that the purported Libertarian Leaders (Reason, magazine/site, ugghhhh) are totally whacked-out stupid about (borders/immigration). On the other side, the conservatives, or at the purported Conservative Leaders and even alt-right, seem to have taken stupid pills when it comes to Feral Gov't control of Americans' health (also here) along with their ideas on foreign policy and the police state. 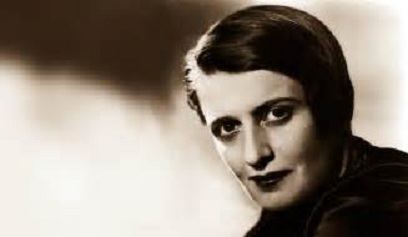 What's Ayn Rand got to do with it? Well, she is not only the poster child for many Libertarians but also the "Emmanuel Goldstein" (see Orwell's 1984) of the Conservatives that hate on the "Libertards". What conservatives don't like about her, from my reading of tons of blog comments, is that her philosophy of "Objectivism" is very cold and unforgiving. Yes, the Objectivism is kind of an uncaring type of philosophy, but if that means Big Gov. is not involved, we're all for it. Miss Rand wrote, from the one book I've read (more about this) almost solely about economic liberty/freedom more than any other facet of it, say, freedom to bear arms for defense from Government, or any other specific freedoms that the founders of this country laid out for defense by the US Constitution 228 years back. Hell, she was a Russian; what did she know about the US Constitution - people cheat on those immigration tests all the time.

Many of the conservatives, in my opinion, think that Ayn Rand's concepts, and depictions in her novels of, economic freedom is all there is to libertarianism. They miss the fact that, with economic freedom, people are freed up financially to be plenty kind in charity, and there is no reason the country (forget the whole world - lost cause there) must be all business. Libertarians understand that individuals and families will always make better decisions than any government bureaucrat, especially on anything regarding their money and other assets.

This was a much better country before the Federal Gov't turned into a Feral Beast. The Big Gov't support and welfare money that is spread about is not charity at all in fact, seeing as all money spent has been extracted from the rest of the population under threat of force. It comes with rules attached that are made by government bureaucrats. In a free economy charity can be done with intelligence and caring. Nobody will keep donating money to people or organizations that waste it. I have noticed that even if I give a bum a measly 2 bucks, I am still concerned if he is going to get good use out of it or if he's lying to me, and I have a vested interest in those 2 bucks doing good.

We need that free market economy and real charity. Those conservatives that knock Ayn Rand's views and libertarians as heartless are missing some imagination. We need to, and can mold a new reality, closer to the heart.


Well, ya knew that was coming, along with Ayn Rand there's gotta be some Rush:

"Philosophers and plowmen
each must know his part
to sow a new mentality
closer to the heart."

Wait now, this review is NOT OVER YET: I do have one problem I with Ayn Rand. It's maybe just a nitpick, but it's just that her writing sucks! Things just dragged and dragged in The Fountainhead, which I only finished because I was unemployed at the time! It takes 2 pages to read about something that should be 1 paragraph. Though I know that Atlas Shrugged is supposed to be a great book, I think I'll have to go get the movie from the library. More books about economic liberty are greatly welcomed by Peak Stupidity, but dammit, just shorten it up, will ya?

Moderator
I watched the video interviews with both the Lt.General Peters and the nutcase Max Boot already.

If you haven't already, you'll enjoy it. I wouldn't say Tucker Carlson was "too kind", but he sure gave in too much on some of the points, especially re: Russia.
Moderator
I'll check it out, Ch .. Hidee.
Hidee
http://nationalinterest.org/feature/tucker-carlson-goes-war-against-the-neocons-21545?page=3