When did the Feral Government get OUT OF CONTROL?

Before I get too far, this post is really about when this writer REALIZED the Feral Gov't of the US was OUT OF CONTROL - but I couldn't get it short enough to be a title.

My answer is 1995. That was too short a post. Let's elaborate. That'll bring some history in here, and I'll tell you right now, I'm going off of top of my head (well, some from the middle and lower-right side too, if feels like). I just have a hard time writing when I have to look up many details, as, dammit Jim, I'm not a HISTORIAN, I'm just a country BLOGGER! Got some corrections - I'll be glad to correct anything wrong in here. However, the reader won't need exact dates here, but the big picture still may be new to younger readers.

If you were a conservative, libertarian, or constitutionalist sort back in 1981, you had to be ecstatic when Ronald Reagan won the presidential election against Jimmy Carter. Now hold on! I'm not saying everything worked out all constitution-abiding and that Reagan didn't let us down in a number of ways, especially by signing the 1st illegal alien amnesty bill, with later regrets about that. However, it was still a change for the much better, even with the thought that a Jimmy Carter today would be considered a HARD RIGHT Nazi (since he's retired he's just a hard-right house-building Nazi to the cntrl-left running the D-party).

Reagan had to work deal with a large Democrat majority in the House of Representatives, and a small majority in the Senate for his first 4 years. Just since I DID look up this stuff, I'll post some numbers:


Republican Party Majorities of the Legislature

Note, I have the numbers through 1992, meaning through the G.H.W. Bush presidency also - 1994 is when things changed, which will lead shortly to the point about 1995. Just a BTW here, but the Democrats had had a majority since the year 1954! While clicking on wikepdia info. I found this and the 2 names of the House party leaders, Mr. Joseph Martin, R majority leader of Massachusetts (yes, you read that right, Massa-freakin-chusetts), and Mr. Sam Rayburn, D minority leader of Texas, were probably dead before most readers of Peak Stupidity were born.

This period was about the time in my life I was doing a lot else and not too concerned about politics, mostly due to the fact that I figured the nation was at least going in the right direction. I could quit thinking about it all. True any conservative policy proposal had to be run up against that pretty big majority of Democrats in the House - look at 1982 for example. The best years should have been the 1st 2, and the D-majority never came back near that level until 1994. However, the Democrat party was not the complete collection of fools and misfits that it is in the present day - it was nothing like that.

Then GHW Bush got elected (nope, didn't vote for him - voted Libertarian once I saw him give part of a speech in Spanish - yes 1988!), the Cold War had been won, and I figured conservatism was entrenched somewhat. Yes, I was too naive to see the whole New World Order business taking shape in American leaders, like the ex-CIA president.

You, the reader, may be caught up at this point, or bored senseless, but I'm almost there. 1992 brought Bill Clinton to the presidency, so the Exec. Branch and both Houses were in Democrat hands, now, as the Senate had flipped in 1990 (probably about the time Bush reneged on his "read my lips, no new taxes" promise. As the 1st lady had decided "she wouldn't just be baking cookies" (well would you eat a cake baked by another antiChrist runner-up? Can't exactly blame ya!), we heard that this non-elected wife had plans to have the US Feral Gov't take over health care. I'll tell ya - those Feral Gov't doings were starting to chap my hide back by 1994 or so.

Now along came 1994 and, I guess I was not the only one who was pissed, as the House, for the 1st time in 42 years was (+26) Republican majority, and the Senate was too (+6). We started to hear a lot from this man and this "Contract with American" dealy: 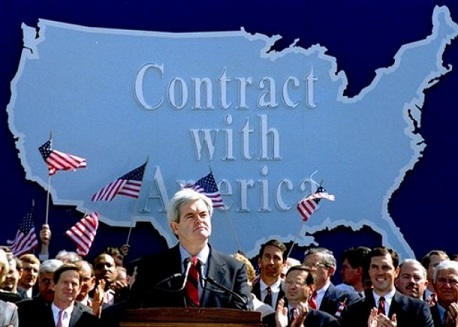 Things were looking up, at the Feral Gov't level, and state governments, other than in the Northeast hell-holes, were becoming conservative to boot.

It was an exciting time in American federal level politics. This "Contract" had about 10 points or so to bring back conservatism, led by Newt Gingrich, the man in the picture, who is, unfortunately, still on TV. I write this because, looking back, and here is the bottom line of this post,

I don't think many of these people, including Mr. Gingrich really cared a whole lot about conserving America. They had a chance to roll things back with their majorities and momentum. It never happened. By 1995 or so, things had just petered out, and it started to seem like these national politicians just wanted to stay in their offices in the Federal Shithole, bicker on TV, and do it again next terms. It was a big letdown at the time, but even for a few year, one could imagine things turning around with some decent people in Wash. FS, but, no, things never turned around.

All this post sounds like a big Red-team vs. Blue-team battle for the country, but, as the last paragraph indicates, it didn't seem to matter by the mid 1990's (maybe it hadn't for a while).

Additionally, this post was completely about the political situation at the federal level, and that's not all I wanted to write about. Therefore, this is officially Part 1 of a multipart post again, consisting of at least one more. Isn't that special?!

"I think he was seriously threatened by the Deep State in Summer '92. It was not just some thing about his daughter's wedding."

I was a bit younger than you were in 1992 and I would imagine you have a better recollection of the 92 presidential race and the media reports of the time. I do not recall anything about Perot's daughter's wedding. I'm not surprised to learn that Perot was threatened by the Deep State. It's how they roll but it does seem like they were less open about their nefariousness 30 years ago than they are today. Maybe they were just more competent and more careful to stay in the shadows. Perhaps it was just easier to conceal their deeds without the internet. I think people had more faith in the goodness of the state and were less disillusioned in those days.(?)

"Imagine a Congress of even 100 Ron Paul types, only voting on bills that are Constitutional. What a concept!"

Indeed Mr. Moderator. It would be a very different world if the statists in congress believed in keeping the "government" shackled by the constitution and only allowed it to exercise the limited powers granted to it.

What a lovely idea.

☮
Moderator
PS: Hello Adam. Ronald Reagan had a deal with the US Congress, who, after all, makes the budget and spends the money. His big military requests (with Congress making the decision) to bankrupt and bluff (with Star Wars) the Soviets was supposed to be balanced out with cuts in domestic spending. He was reneged on - the guy didn't trust the Soviets, but then he trusted the US Congress - bad move.

As you can see in that quick table, there weren't the numbers to make a serious effort to balance the budget. (I'm not saying Reagan was so gung-ho about doing that, but he and a 1980's era R Congress might have been able to pull it off.)

I really did have high hopes for Ross Perot. I think he was seriously threatened by the Deep State in Summer '92. It was not just some thing about his daughter's wedding. After all, if these people can scare a guy like that, he's not going to be blabbing about that fact.

Imagine a Congress of even 100 Ron Paul types, only voting on bills that are Constitutional. What a concept!
Adam Smith
PS: Good evening Mr. Moderator...

Reagan tripled the Gross Federal Debt from $900 billion to $2.7 trillion. George the 1st added another $1.5 trillion.

Too bad Ross Perot didn't win in 1992 and 1996. I think Perot could have eliminated the federal debt, provided the bankers didn't eliminate him the way they did Kennedy. Would have been nice to see other responsible people like Ron Paul follow him in the years to come instead of warmongers like Bush and Obama.

The U.S. wouldn't be so overwhelmed with debt today. Who knows, some one like Ron Paul may have even abandoned the fiat debt currency for sound money once the country emerged from bankruptcy.

Moderator
PS: In local politics your vote will be one against 1000 old people who have the time to notice said elections and get out there. There is usually a gap between their morning Constitutionals and the Early Bird Special of 3 hours or so, allowing for just enough time for them to drive the 2 miles to the polling place and back.

I'll plug in your youtube link later on ... speaking of morning Constitutionals ...
Robert
PS: I have only voted for two politicians in my life. Reagan in 1980 (I even named my parabolic dish space heater Ronnie Raygun) and the current occupant of the White House (but mostly for the entertainment value). I would have gladly voted AGAINST many of them, but the idea that they might think I approved of them was just too sickening. Here is Huey P. Long giving a polite version of my general view of the two parties:

Usually I compare voting to the idea of being allowed to choose whether I want my right eye, or my left eye, poked out with a sharp stick.

P.S. Perhaps if I ever lived somewhere where I both had an understanding of local politics and an election was actually contested I would vote then.