When did the Feral Government get OUT OF CONTROL? (Part 2)

At the end of yesterday's post on the Feral Government, I had said there would be another part or more to go. That is correct, but I had forgotten that I had another thing to write that is still about the big Feral Beast we have let take over America.

We all know about the 3 branches and all - well people who like this website must be smart so they'd know; that's my pre-validated assumption ;-} Yesterday covered some history of 2 of them, the executive and the legislative, with respect to the 2 parties. Again, I don't see that there's much a difference at this point, but the history matters. This post is a quick one about the 3rd branch, the Supreme Court.

This post is not to be a rant about the out-of-control 9 old men and woman who are a part of that shit-show. It's not that the rant is not appropriate, it's just that all this government policy stuff can be read at a million other websites. Suffice it to say that, yeah, they should NOT be the last word on what's constitutional or not - the other 2 branches should have input and should use some power that the founders gave them.

Here's just the bit of history. Don't worry, there'll be no dates to remember or particular court cases to take notes (or screenshots on), as I don't know them. It's just this from memory - not many details but I'm sure of what has changed. Back in the first part of the years discussed in Part 1 and before, let's say through the 1980's, I recall from current events reading one major difference regarding this body of "august jurists". It was that the cases being tried then were disagreements not usually over whether this certain law or new program was constitutional or not, but which part of the US constitution applied most. That should be explained better - the cases seemed to be about laws passed or actions taken by the plaintiff or defendant that caused a conflict between one Amendment or passage in the constitution and another.

An example, only one I can think of from the current era is: state laws that prohibit rules by a corporation over guns stored in cars in the company parking lot. On the one hand, the 2nd Amendment is pretty clearly on the side of laws that allow the employee to keep that gun there, but then the definition of private property (company parking lot) would lead one the other way, as private property can not be taken or infringed on by governments without due process. (OK, lets' not focus on what they've really been doing lately, just this concept of these conflicting rights.) Back in the 1970's it seemed that the rulings, at least those that became headlines, were all about these conflicts. This law is contrary to Amendment 1, but striking the law would seem to be against Amendment X, etc. There were usually discussions about these questions that would really make one respect the office of member of that court, as it was not an easy clear call.

It was not like we've seen recently, where the Supreme Court and the lower ones too, will just politically decide cases that anyone with a decent grasp of English could read were not at all constitutional, period. This is especially true for Amendment X. Here's the document, and Amendment X is short:

The powers not delegated to the United States by the Constitution, nor prohibited by it to the States, are reserved to the States respectively, or to the people.

There's nothing difficult about this stuff. It's VERY CLEAR, this limit on the powers of the Federal Gov't. These jerk-off-jurists have used this phrase though, from the Preamble (just the introduction, not the rules of the government!), here,

We the People of the United States, in Order to form a more perfect Union, establish Justice, insure domestic Tranquility, provide for the common defence, promote the general Welfare, and secure the Blessings of Liberty to ourselves and our Posterity, do ordain and establish this Constitution for the United States of America.

to subvert it all. It's just a general clause, explaining why the document was being written up, not part of the body, and it has no detail. The rest of it does.

Think about it, if a Federal law is passed, forcing every town in the country to have a swimming pool and spa for the "general welfare", is that what the Founders had in mind? Come on, that ends in ... well, what we have now... we're at the end.


Really, would you trust your country to these nine yahoos? 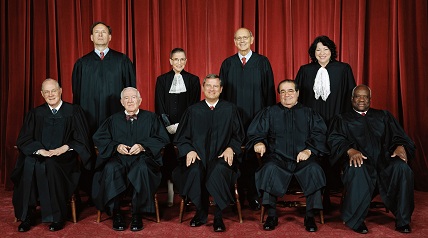 It was possibly the late '80's, per Robert Bork's book, when the whole "penumbra" BS, just words meant to confuse, got started. That is when the cases started to be just obvious sign-offs on Big Government by that court. The Supreme Court is an institution that has been completely politicized to a state of zero integrity, and that was becoming apparent to this writer by the mid '90's. I never have used the term SCOTUS, as I hate those acronyms, and it really just sounds a bit too close to a male body part, but for the present body of jurists I can make an exception.


(This is one time I wish I were a constitutional lawyer like that great scholar Øb☭ma. It would be not only easier to explain my point in legal terms, but I would have examples in my head. That last was a joke, just like that antiChrist man was.)