Credit? Forget it! You got it? You get it!

That was a great motto - it'd be called a meme now - of cash businesses that used to have distain for customers who couldn't actually pay for what they wanted to buy. If you want to use credit and have us put on an additional hat as a banker and trust your sorry ass, well, FORGET IT! If you can pay us in (what used to be) real money, YOU GET IT!. That's what they meant, and I like it.

Peak Stupidity had a series of 3 posts over 2 months back ( 1st, 2nd, and 3rd ) on the perils of the trend toward a cashless society. These worries were about the Orwellian control-freak society we are in that will become even more so with the recording and control of spending habits of individuals, leading toward stuff written about in Revelation. In addition, the cashless transactions just encourage monopolies in big Corp/Gov. (almost the same thing anymore) by providing them with more resources, as the big guys get their cuts - 2% is it? - on all credit card transactions.

However, this post is about another problem with the financial mind-set of most people in American society. Even so, this other problem leads again to control-freakdom. Here's the subject of this post: Americans' paycheck-to-paycheck spending habits.

Maybe this post will anger you, the reader, if this description is about you, but it must be said anyway - we can get another reader! ;-}. I know many 2-earner couples, making 6-digit dollar figures yearly who, nonetheless will really have problems if a) either one ends up unemployed for even a short while, or b) one has problems with payroll, the bank account, or whatever that causes just 1 or 2 checks to not make it into the account regularly, or c) a medium-sized unexpected bill, say a month's salary for the two, come up. At the lower end, there are people who truly don't have enough money to build a huge nest-egg, but could at least sock away a few hundred a month to get emergency money set up within a coupla years. They don't because they have spent it on vacations, upgrades to the vehicles or what-have-you. Most Americans have no sound-economics way of thinking.

Yes, about everything can be obtained on the payment plan. People compare the payments added together - house payments, car payments, credit card minimum payments, student loan payments, home equity line-o-credit payments and various and others to their net salaries. It's all fine if the former just equals the latter. The house payments was the first to be seen of all this buying on credit, and from what I've read, this only goes back less than a century (okay, I guess a century is a pretty long time). The rest of it is much more recent. Your average person or family DID NOT live like this in the early 1970's even.. The whole thing is pretty sad.


Yeah, this is gonna help. Now intead of a bunch of small payments, it'll be only one LARGE one (oh, plus the fee). 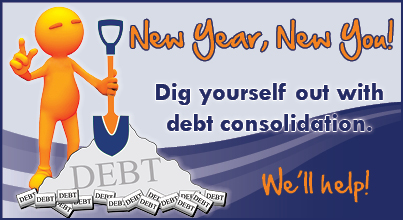 See, it hasn't always been this way, but, you know, the big Corps/big Gov. want to see that GDP go up, up , up. Never mind what is actually included in that GDP, a subject for another post - some of it has nothing to do with pulling valuable stuff out of the ground, growing food, or creating wealth via manufacturing processes. In this world of living in perpetual debt, the ones making out the best are the ones taking the cut of all spending and charging interest on money that supposedly has NO TIME VALUE (were one to base this on what the FED charges for interest to its banker friends).

Let me now get to the point of why this way of living also results in a big increase in the control-freak, Orwellian police state society. Let me go back to that "living paycheck-to-paycheck" phrase. Here's what's the problem with that, aside from the normal worries about the monthly struggle to pay down all the STUFF: One loses much control of his direction in life when he is tied in to the incoming salary on a very short time-line. Let me put this better as an example. I've been reading about the fired Google-guy who wrote a simple, in-my-opinion still PC, memo about the whole male/female differences thing. (This post is not about the particulars, and, as to be expected, Steve Sailer is all over it here, here, here, here, and here.). This guy may come out of this with a job soon, just because this situation has gotten lots of attention. That doesn't happen to the average employee, however, and it can't. The closer you are bound to your job via your tight month-to-month budget, the less likely you will quit, speak-out, or even push-back a slight bit, when you are harassed with all the mass stupidity. You are not a free agent if you live like this - you are much more beholden to your employer and must be more of a suck-up, a kiss-ass, whatever it entails, to the dieversity and PC-crap than if you had a year or two's salary put away to find a new job or even a new career and leave the stupidity behind!

Moderator
PS: I hope you didn't lose any material, sir. I have myself, but this has worked just great on the SPAM, so I need to continue doing this. Thank you very much for your 3 comments, BTW, Mr. Fahrquahr.

Wives will never get it until the electricity goes off and the tap water turns brown with creepy crawlies in it ... for a week or two.
Peyton Fahrquahr
PSOops 🙊. Just saw that spam rule! Sound advice, but the Wife won't listen.