The term "Anarcho-Tyranny" has been mentioned as a topic to discuss to help explain what went on in Charlottesville, Virginia a week or so back, and I believe the term has been mentioned here on Peak Stupidity before. It is indeed a higher-order form of stupidity that can be imposed upon an entire nation (if need be). More explanation will follow, but just to summarize in our words, the spirit-of-the-law abiding general population has tyranny imposed i[pm it, as the dregs, illegal imports, and others that the elite wants to leave along as useful pawns in their cause is left completely alone in anarchy.

Now, the man responsible for the term is the late Mr. Sam Francis. Peak Stupidity was not around, and this writer was not involved at all, in these issues during Mr. Francis' time of writing. No, Sam Francis did not invent the process of anarcho-tyranny, he wasn't the first to discover the idea, I'm sure, but giving a name to it can help right-minded people to visualize what is really going on in their world. Therefore, the term should be attributed to him, so additional reading by Mr. Francis follows.

Anarcho-tyranny can be learned about all over VDare.com, as this fits in with their subject matter, immigration. It seems there was a mutual relationship between Mr. Francis and (at least some of the people of) VDare back in the past. Mass Immigration + Feckless Feds = Anarcho-Tyranny and Anarcho-Tyranny—Where Multiculturalism Leads are two articles, from 2003 and 2004, respectively, on the subject.

In the earlier article linked to above, Mr. Francis linked to his own origin of this term with this 20-year old archived email (part here) about Maryland and Federal law during the (last and done!) Clinton administration:

The new Maryland laws are rather perfect instances of what I have previously called "anarcho-tyranny" - a form of government that seems to be unknown in history until recently. Anarcho-tyranny is a combination of the worst features of anarchy and tyranny at the same time.

Under anarchy, crime is permitted and criminals are not apprehended or punished. Under tyranny, innocent citizens are punished. Most societies in the past have succumbed to either one or the other, but never as far as I know to both at once.

In the United States today, lawmakers worry far more about drivers who don't wear seat belts, run red lights or play their stereos too loud than they do about the thousands of rapists, thieves, and killers who prowl about as free as wolves in the woods. If the Maryland legislature spent any time this year increasing the. penalties for real crimes, I haven't heard about it, nor did it make much effort to improve enforcement of the laws it already has.
[snip]
But of course such laws do nothing to impede real criminals. The anarcho-tyrants create new laws that merely criminalize the innocent and ignore real criminals. The result is that law-abiding citizens catch it twice: once from the real criminals to whom the state is oblivious and once from the laws that criminalize the law-abiding.

Let's look at the Charlottesville street battle, as an example of anarcho-tyranny, shall we? (Yes, we shall.)


Picture from Pat Cleburne on VDare.com No trouble till the Government-sanctioned opposition showed up: 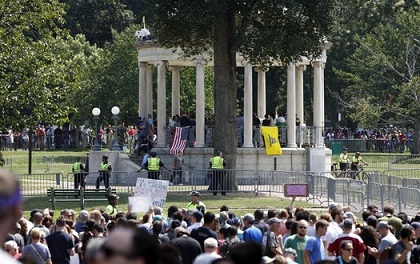 You had a group that wanted to make a simple non-violent demonstration protest. One can argue over whether the cause is a good one (yes, it is), but that's not the point at all. Oh, another argument, one may give, is "nonviolent? Well, why all the weapons". Answer: Other nonviolent events like this turned out to be one-sidedly violent, and let's not get our asses kicked. Oh, and there were lots of Southerners.

Then there was a group out to stop a peaceful march, an assembly, and some speeches from happening at all. How were they planning to stop it without the use of violence?

Then, there were the law-enforcement goons with their bullet-proof vests out to intimidate whoever their masters wanted them to intimidate. Their purpose, if not to try to keep the peace (that is arguable), is at least to enforce justice. That requires, even if they were to let a battle rage it the streets, them to arrest those that were the perpetrators. That didn't happen at all.

Let's cut to some video off of live-leak, because at this point in 2017, I don't believe youtube can be trusted to leave anything political unfiltered and uncensored - I don't know how to embed this, so here you go.

The alt-right crowd who had law-abiding plans were stifled by tyrannical city and state governments. That would NEVER have happened to a crowd of BLM brothas, La Raza amigos, or, Gay Pride homo(sapiens), or even "Save the Whales" treehuggers. NEVER, and everyone knows that from memory and common sense. One step out of the line, no permit for a march and speech (wait, what does the US Constitution say about that one!?), or a brandished weapon, and a law-abiding guy goes straight to jail.

The cntrl-left crowd was left to do whatever damage they wanted to. Look at the video in that link or read Pat Cleburne's latest article on VDare, called "Post Charlottesville Anti-Right Pogrom Based On Fantasy: A Compendium Of Facts" to learn some truth on the happenings there. I didn't see arrests start happening when the antiFreeSpeech thugs brandished weapons right up to the march. Just separate from Charlottesville for a second, I've not ever seen a flamboyantly-self-describing illegal alien get arrested for that crime at any of the La Raza rallies.

The latter was the anarchy, and the former was the tyranny. This is going on not just at events like the Charlottesville battle, but is the on-going mode of operation of most tbe Feral Government, and should probably be discussed in a later post with a Liberty/Libertarianism topic key attached. For now, Sam Francis would be your best source.

Jim L.
About resistance to more alien resettlement in Idaho: