Wasn't that Phil Collins and Genesis? Did we get the song title correct? How in hell do you sing these songs while you bang on the drums? Don Henley? Karen Carpenter? Ferris Bueller? Anyone....? Anyone?

OK, Phil Collins falls under the category of great artists who really don't know a whole lot, or enough to be shooting off their mouths like Bono? that, but it was a good song, alas not to be featured here, as I have another in mind.

The two posts show far on the basic idea of anarcho-tyranny so far, (part 1 and part 2) have included illegal immigration and these aliens as the main example of the anarcho portion of the term. Though Peak Stupidity has a Topic Key, Immigration Stupidity pointing to over 40 posts as of this date on massive immigration, both legal and illegal, here is a short post just on the number of people in this "sector" of the population, to go along with the anarcho-tyranny posts.


Some of us pay good money for a hike in the Sonoran Desert. 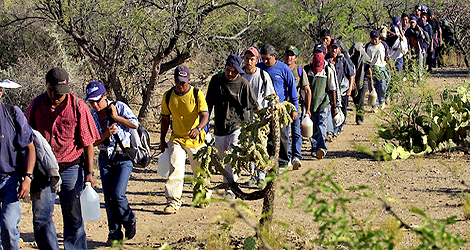 Let's talk Mexicans and then Chinese. However, when talking "Mexicans", we imply the inclusion of a significant percentage of these from other countries in Latin (mostly Central) America. There are many Guatemalans, El Salvadorans, and others that pass through Mexico (if they don't get thrown in jail, raped, robbed or a combination thereof on the way - no they are not keeping their most compassionate Border Patrol agents!). Peak Stupidity cannot be keeping up decadaly with the latest damn euphemism for Latinos, be it Hispanic in the oughts, beaners back in the 1970's, during "Chico and the Man"'s day, and whatever you want to here now. It's too much, let's call 'em all Mexicans for practical purposes this post.

When talking Chinese (yes illegal aliens, you didn't know?), we may be including a few others, say from Thailand, Vietnam, or Laos. There wouldn't be but a handful of Japanese, just because there country is nothing really to run away from right now, financial news reports notwithstanding. Ditto for South Koreans. Now, North Koreans, along with white South African refugees, BTW, may be a just a few people that I would even think of asylum for, as you'd have to be damn good to get here - N. Koreans for obvious reasons, and S. Africans due to US immigration de-facto policy of refusing them flat-out. Anyway, suffice it to say, that by "Chinese", we mean 95% Chinese.

The number 11,000,000, like we know the precision to the nearest million (ha!) has been bandied about since 2001 for the number of illegal Mexicans living in the US. We don't use static numbers for other widely-varying values, and nobody had a good measurement in 2001 anyway, so this number is bogus. Your average illegal Mexican is not gonna come outside for the Census man, and I can't blame him for that; I don't like talking to the guy. However, just estimating percentage of population in average states, then adding in pretty-well estimated LARGE values for California and Texas, is gonna get you over 11 million. I'll say 20 - 25 million. "Hey, you just pulled that number out of your ass!" says the reader, or "via rectal extraction" says the more gentlemanly reader. Yeah, what of it, so did you with your 11 million. What are you saying, your ass is more accurate than the ass of Peak Stupidity?! ;-}

The number of illegal Chinese residents may be much more of a surprise to Americans. If you don't live in a medium or large size city (IN the city that is, not the 'burbs") you may not know, as Chinese people LUV the city, as described here. You won't find out easily without being with someone who knows the language, but much of the help at the myriad of Chinese restaurants in medium and even smaller towns are illegal Chinese people. Add in the massive amounts of people in the Chinatowns of NYC and the west coast cities, and just simple estimates can get one over 2,000,000. I will admit that is just a 1/2 order-of-magnitude guess - let's say 1 - 3 million. No, most do not cross over from Mexico, Canada, or ride in shipping containers. Most come via some type of visa, but overstay forever. The US does not have any good system being used to track exits, as THEY DON'T WANT TO DO IT, or the elites DON'T WANT THEM TO!

The quick tie-in to the anarcho-tyranny thing here is that both of these sectors of the population residing in America are living in some ways, especially economically, freer than the sector under tyranny. Oh, they can't get SS, they don't do paperwork, so they can't work for IBM or Google, you say? Yeah, but that's the point - no paperwork, no taxes, working as real free agents. Were the 16th Amendment to the US Constitution (on allowing the Feral Gov't to collect income tax) not around, we'd all live like illegal Mexicans and Chinese in a good way. "What do I do for a living, Gov't man? None of your damn bidness gringo!" Let me not get into right here the paperwork many illegal aliens (2nd-hand info.) do manage to fill out - that of the Earned Income Credit - to get some of you middle-class folks' tax money. They do get into H&R Block for that stuff. In addition, some of the illegal (and legal) Chinese, being always more savvy, will get on all the taxpayer money-redistribution programs they've heard of on We-Chat, say WIC, Medicare, what have you, even when making a GOOD LIVING in cash.

Wait, did I say short post?? Would you believe medium? This song to follow is named "On the Border" and, as written before, should not be confused with the great History-Musician Al Stewart's song with the same title. Mr. Stewart's song had the theme of wartime intrigue, while this Eagle's song is more about someone who is being hassled by the authorities and just wants to be left alone to "turn this water to wine."

I'm not saying I agree with the lyrics here, but they are not really specific enough to say. This comes from the same-titled album from way back in 1974 during the best part of The Eagles country-rock phase (just as good as one of the best concept albums of all time, the previously-released "Desperado"), with the line-up of:

Woah, forgot that youtube blocked the hell out of this one, I suppose per Eagles request, but you never know anymore. What, youtube censors, too un-PC, too much anarchy, not enough tyranny?

No embed of the song here allowed, so we are SOL here on that one. From the same great album - nothing but good songs on there, here's "Already Gone", a bigger hit for them:

Eagles On The Border (Remastered):
https://www.youtube.com/watch?v=cbctW33iRYw