On Gentrification and Burglary

While walking through a really nice historical neighborhood while in a small city on the coast a few days back, I thought of all the hard work and money it takes to keep all of these old houses and the nice shops, excuse me, shoppes looking great and not falling apart. What kind of people take the time to make things nice like this?

I have got a friend who bought a house in an inner city neighborhood in a fairly large city in Ohio a few years back. (Yeah, Ohio has a number of fairly large cities, so that doesn't pin it down, I guess). This guy's move to that neighborhood, near where his family lived long ago is a part of the a phenomenon called "gentrification", which really means "making a neighborhood decent again". Yeah, the house was old and had not been kept care of, as old houses need to be, and needed a lot of work, which my friend and his wife were quite capable of doing. 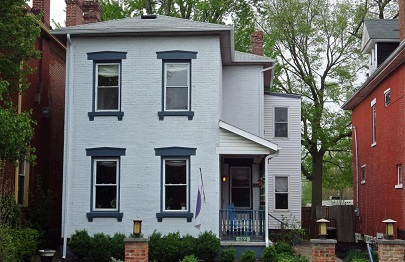 I wouldn't call this guy one of the usual types who are at the forefront of gentrification as he is a family man. I have read, and seen somewhat also, that it the gays first and then young, usually childless couples that move into to decrepit neighborhoods first to try to make a decent life in what is initially still "the hood". Let's see why that is.

As mentioned on Peak Stupidity before, Americans, in general, like to have their space as opposed to the Chinese, for example, who do not feel themselves unless packed together like sardines. It's who they are. Anyhow, Americans now have lots of distain for the cities partly because over the last 50 years, what used to be very livable places have turned into ghettos. Almost every big and medium sized city has the inner core filled with ghetto blacks. You'd have to be pretty old to even remember a time when a family could live safely DOWNTOWN.

Now, it's easy to confuse the cause and effect - did the people just move out to the suburbs due to the ease of car travel and their desire for bigger houses and more space? Sure, many did. Families like to have some peace and quiet and more room for the kids to play. Yet, why did even most of the young white couples and single people move out? You will usually see them only in locations near a University. The exodus of decent people from the cities, black and white, has not been just due to the automobile. The violence and trashed-out public spaces created by just the minor part of the black community that had taken over these cities 30-50 years back (depending where) is what has had people (ironically both black and white) flee to those suburbs, and now exurbs, for that same amount of time. These exurbs you see now, that are 10-20 miles from downtown were made to get people away from the riff-raff, to enable them to send their kids to decent schools and to get the whole family far enough away from violent crimes.

There is a lot of risk involved in being one of the "pioneers", the first ones, to try to make a decent life in an inner city by fixing things up. It starts with the housing. The cost to get in is low, as the houses aren't worth much due to crappy schools due to the type of people that live there, and the general decrepitness of the area due to the culture (caused by genetics) of the black community. In GENERAL, they just aren't very good at taking care of stuff. Hey, I'm somewhat in the middle here. I kinda like old couches on the porch, and some cars being worked on in the yard under the tree here and there and hate the neighborhood association business. However, you've still got to take care of stuff. For some of these gentrifiers, the general easygoing-ness is part of the charm. Yes, most of these inner-city black guys are people one can deal with too, but there are just TOO many that are up to no good.

That's brings up the other hand, the risk for these urban pioneers in moving there is that the violence is still around until the riff-raff can't afford to live there anymore. That only happens after most of the gentrification is done. By that point, the house prices have all gone up, as the place has become desirable again. It's in the interim that things like getting completely cleaned-out by a burglary are more likely to happen. That's what happened to my friend's place. "Cleaned-out" means they didn't just suffer the indignity of someone getting in there and throwing all their stuff around looking for cash, jewelry and electronics. That would be enough, but this means most of what was of value and easy enough for a couple of guys to pick up was gone.

As a slight digression here, I'll just say that my friend had needed to be out of town for long periods of time. He was far away when this happened (yes, I know 2 miles away and what's the difference?) From some experience, I believe that many crimes are more of an "inside job" than people think. It could be just one well-meaning friend who told another one who mentioned things to some other guy who was not particularly well-meaning and noted the address. You've really got to be careful whom you tell personal things too, not due to the listener's trustworthiness, but due to his ability to keep his mouth shut at certain times. Keep your old cars, in the driveway. It helps a lot to have a car or two around for this reason: Due to Americans' still-extant right to keep arms, burglars are much more afraid to break into an occupied house than they would be in most other parts of the world. They are much more afraid of a 9mm round than Johnny Law. That's a good thing.

With all that said, the existing community doesn't WANT things to be fixed up nicely:


This is OUR shithole. We like our ghetto and were told we could KEEP our ghetto! 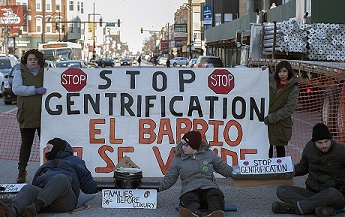 This is the curmudgeon in me coming out, but I CAN understand why even the decent people in these ghettos don't want change. They don't want different types of people to move in (you know diversity is really not our strength and everybody knows that.) Though I get that, the people such as my friend bought their houses fair-and-square, just as the granddads of the current black residents bought their houses fair-and-square from the white owners that didn't want them there either many years back. Nobody wants this kind of change, it seems.

Diversity - what is it good for? Absolutely nuthin! Huh!