President Trump seems to have been Neoconned into worthlessness 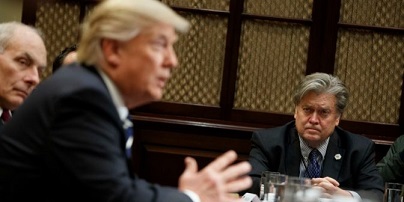 It's not the idea of the Peak Stupidity blog to delve into wonkishness, meaning the details of the all the deals being made by the our betters in "our" all-knowing, all-powerful Feral Government. It's not that the details aren't important, just that Peak Stupidity does not completely have the reigns of power in the BIG PUNDIT world as of yet, in order to do a damn thing about anything that goes on in the Washington, F.S. An example of our opinion on this was in our Christmas time post on the income tax changes that, even if one gets into the details, turn into a big ball of nothing.

Therefore, excuse us if we have not been following the details of the latest capitulation negotiations in the 5-dimensional chess game over DACA, or Grand Amnesty 2.0, between the evil bunch across the aisle and the stupid and seemingly stupid on "our side". I just read the stuff after the fact from writers I can trust. The one truly outstanding member of BIG PUNDIT that is on this issue is Miss Ann Coulter, praised on Peak Stupidity multiple times, here, here, here, here, and here. Ann Coulter is "pissed off indeed at the President Trump meeting with the D-wing of The Party, as it sounds like 5-D Chess is possibly not a real game, and this guy gave away the farm. Her lastest column is It Turns Out Bannon WAS Trump’s Brain.

As mentioned in that last of those 5 links regarding Miss Coulter's writing, she writes with the idea the policies that can start to end the immigration stupidity in our country are just not being done due to stupidity of the people in power, say, President Trump. In other words, if they would just listen and GET IT, they would do what Americans want done. As I stated in that last post, that's not the case. To add to what I wrote then, Trump in particular is not stupid and is obviously aware of what needs to be done. Why has he become suddenly stupid and a bad negotiator?

Has President Trump been neoconned already? Some of my ideas about how this happens were laid out here back when Trump totally reneged on his campaign promise to rein in the warfare state, as the Syria bombing started and he started mouthing off about N. Korea. That was very close to the beginning of his term as President, only 3 months in, and all of that stuff is completely under the control of the President in the Commander-in-Chief role. As I wrote, the great thing about this guy as a candidate was that he was already rich, forestalling bribery by the Deep State, already famous and well-known as a New Yorker, forestalling blackmail. The last options is threats to him and his family. Who knows? I didn't see the video of this (according to Miss Coulter), but if it went down per her writing quoted below, than maybe he is under some intense pressure:

In order to prove he doesn’t have dementia, as alleged in a recent book, President Trump called a meeting with congressional leaders on Tuesday—and requested that it be televised.

Ivanka: Show them at your best, Daddy!

He then proceeded to completely sell out the base and actually added to his problems by appearing senile.

In a half-dozen exchanges—which, again, he wanted televised—Trump responded to remarks as if he had no clue what the person was saying. One senator would talk—he’d agree. Someone else would say the exact opposite—he’d agree with that, too.

Yeah, that's depressing to read, and the rest of Miss Coulter's column even more so, when she gets to the details of this impending sell-out.

It was really nice to have a guy on our side to at least rally around and not spend the day scolding real Americans and doing anything she can to screw us over in every realm of life. However, it could never have been just the one man Trump, alone, to ride up and solve our big problems. We're on our own. Get that in your mind now.


Moderator
PS Yep, he's tweeting out all sorts of stuff, but your line would indeed be a good one, Mr. Jones. He probably needs a tweet-writer like presidents in the past had speech writers. It didn't always work out so well,t hough, as Ronnie Reagan had Peggy Noonan writing, and she is just a worthless broad. ... just worthless.

Thanks for commenting, Bill.
Bill Jones
PS I have never understood why Trump's line (and it fits in a Tweet) isn't: "I'm not prepared to sell out American citizens for the benefit of foreigners, why are you?"