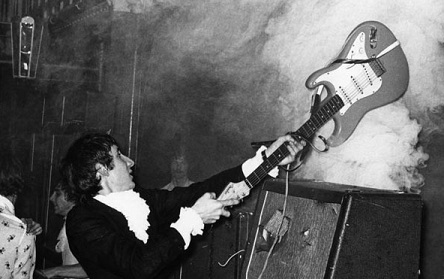 We've got another generation gap going I guess, this time around seen just as another part of Peak Stupidity by this generation, well, blog writer, at least. We are all things stupid at the Peak Stupidity blog, so I guess you could expect us to see it this way. I wrote something kind of critical of the young people in yesterday's post about coffee shops.

The very first blog post here was partially about the huge slide in the quality of good music from the previous generation, or two or five, as compared to the music out of these millennials. They may be lacking in extra cash, but they sure aren't lacking decent cheap recording and mixing equipment - I haven't seen a one without a "phone" that has more power than all the computers existing in 1965 added together. How did the music get to this state of suck?

I don't know, but one could imagine a conversation between father and son about the difference in musical taste back in the 1970's:

"That's Zeppelin IV, Dad. The song's Rock and Roll. It needs to be LOUD, Dad! Listen to John Bonham on those drums."

"You call that drumming? Sure, he's good but he's too loud. Now, Karen Carpenter, there's a drummer. What in tarnation (that's how squares talked back then) is that squealing and singing in the middle?"

"That's Jimmy Page's electric guitar. He's even got two necks on it!"

"Well, he's good, but the instrumental parts should be played by trumpets, trombones and clarinets, son."

It wouldn't be long until they'd both be groovin' to the Doobie Brothers and then maybe some Cheap Trick. The instruments were changing, the music was mostly getting louder too, but nobody could deny it was music. Now, what could you say to a kid that listens to these ululating orangutangs and soy-boys (that's the modern lingo) that think they're musicians. The boomer Dads and Moms are willing to pay $150 for tickets to see 65 year-old Fleetwood Mac members (no Christy McVie, so it's NOT really Fleetwood Mac) to get away from the modern shit.

Now, the shows the millenials do got to are all about what more pieces of clothing the artist may be missing, but there's no excitement like a Dead or Zeppelin concert of years back. How could you be excited about such unadulterated garbage going by the term "music"? About the only thing I'll give 'em, though it's probably just due to the tougher economy these young people are living in, is that at least you don't have the musicians smashing perfectly good guitars at the end of the show. That never set well with me. If it was that bad, why in hell did you buy it - yeah, you, Pete Townsend!

Cheap Trick opines on the closing of the last generation gap, with regard to music at least, in front of a few Ten's of Thousands of screaming Japanese chicks:

"But when I woke up, Mom and Dad
were rolling on the couch,
rolling numbers, rock and rollin',
got my KISS records out.

JImbo
PS Article on phone privacy, as in none: