... at least in the modern day American institutions, that's about the size of it. Big Media, aka, the Lyin' Press, the universities, education schools and the spawn therof, governments at almost all levels... nobody's to the right and nobody's on our side.

This post comes from some comments along with lasts week's John Derbyshire column, Campus Craziness Will Awaken Trump’s Silent Majority Like the ’68 Riots Did Nixon’s. Mr. Derbyshire is a former member of Big Pundit, before his removal from his position at Conservative, Inc. mainstay, The National Review due to charges of "dereliction with intention to commit honesty" or some such "Trumped-up" charge.

The Peak Stupidity blog has linked to Mr. Derbyshire's always interesting, and usually 100% correct articles many times. In this latest, before I turn this into the subject of this post, let me give my disagreement with his premise, which can be seen right in the title, and answer his concluding questions:

I ask again: How long will the voting public in civilized countries—Dick Nixon’s Silent Majority—how long will they put up with this level of disorder?

How long before federal authorities step up to protect the civil rights of Richard Spencer and Christina Hoff Sommers?

How much longer will thoughtful, civilized people with unpopular opinions be shouted down and physically attacked by masked anarchists, while law enforcement too often (the Michigan State campus police p erhaps an honorable exception here) sit passively and watch—or, as in Charlottesville last year, actually co-operate with the people wearing masks?

I would say never to the 1st 2 out of the 3 groups, as to when they will fight back. Here is my reply as a comment:

You ask the question “how long?” 3 ways, Mr. Derbyshire, in terms of three different parties that could put a stop to this. I say there is only a chance with 1 out of the 3.

Leaving aside that most of the antifa violence is not Feral Gov business to begin with, the big federal beast has been composed of people who have not been on the side of average Americans for a long time. It would take a few decades of replacement of people in all positions higher than help-desk “technician” to give the fed-gov a new direction. Trump could give orders for busts of big examples like the California officials who are abetting criminals, and I’d like to see a lot of that. For the types of events discussed here though, all he’s got is the bully pulpit. The government anti-Americans are entrenched.

As for the voting public, this isn’t 1968 anymore, and the country doesn’t have a 80% silent majority anymore (say 90% of the 90% white people). I am not talking about election numbers, but just ordinary real conservatives. It might be 50% now. This isn’t going to be solved via national elections, leaving us:

The American people may have had enough after a few more years of this. No matter what the Dow Jones and Trump administration say, long-term economic trends have not and will not be good for the middle and former-middle classes. Once there is not very much to lose anymore for a young guy who is indeed as sick of this stuff as you are, there will be some violent pushback.

For now, it’s a matter of how PC and cowed by the cntrl-left the local authorities are, with your Michigan State vs. other 3 events being an example. However, if young American conservatives realize there’s not much to lose in getting arrested, or “they can’t arrest all of us”, then you’ll see things change for the better, with some busted antifa heads. I’m looking forward to this.

I want to expand on the thoughts that many Americans have had all over the internet on how this cultural and possible real civil war will pan out. Mr. Derbyshire, a fairly long-ago-arrived immigrant from England (BTW of China, BTW) has learned the American idea, amazingly passed down via real Americans over the years from our founders, about the real reason to keep the guns. He wrote about it just the previous week in his column, in fact. It's good to see that some people do learn, vs. others, having lived here even longer, or even their entire lives have learned exactly SQUAT. This post and 2 others to follow, by may calculations, is about these thoughts on how things will go down.

I used to follow lots of the patriot, constitution, and gun sights (pun/spelling error intended) more than I do now, just based on time. Many of these writers have more experience, some military or law enforcement, others just with more knowledge of military history than Peak Stupidity does, so I will not delve into this area very much. It's not just guys that write blogs however, buy many millions of usually older Americans that are "the people of the gun". That term was from one of my former daily-reading web sites called alphecca.com (the guy still has his URL, but doesn't look active) from 10 years back, wow! That blogger got the term in turn from an anti-gun nutcase writer who used it pejoratively, but Mr. Soyer of Alphecca (name just came to me after 10 years) made use of it with a page full of fun-loving gun people.

We've got all the big institutions on one side and the people of the gun, and quite a few more silent conservative Americans on the other. Where does the biggest factor, the US military fit in? That will be the real subject of the subsequent posts.

Let's just start out with a picture of some people on both sides of the battle lines being drawn. A picture is worth one thousand words, right, and I am not exactly getting paid by the word here:


"People of the Stupid"? 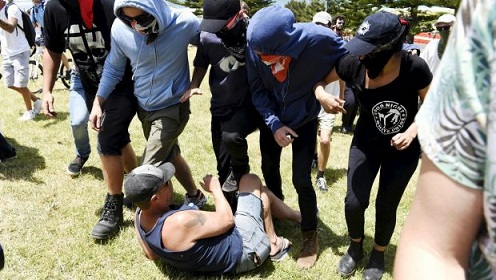 Here's a case where all the ideas are ready to go into the post, but time and compactness are forcing this to be a 3-parter. The 2nd part will come tonight, with a description of the side in which "nobody's right".

Moderator
PS: Thanks for checking in on here, N.P. I've enjoyed reading your comments all over the place on unz.com.

The major discontinuity that I see coming is a serious financial crash. As I've written about lots (especially early on in this blog) under the "Global Financial Stupidity" topic key, what can't go on, won't go on. It's not just the Feral Gov't that can't continue to live off the goodwill attached to the US dollar. There's just debt everywhere that can't keep building - pensions, student loans, consumer debt, etc.

I'd be the last to complain if the University bubble (caused by gov-backed lending to student) pops first, even though, due to circumstances, I will feel it too.
Negrolphin Pool
PS I gotta check your blog more often.

"The big federal beast has been composed of people who have not been on the side of average Americans for a long time. It would take a few decades of replacement of people in all positions higher than help-desk “technician” to give the fed-gov a new direction. "

I don't see how that happens without a major discontinuity. Kakistocracy is self-reinforcing through a number of mechanisms. Red birds don't fly with blue birds. Good cops don't join the Ramparts division. And as occurs in Matt Bracken's What I Saw at the Coup, Marxist-Leninist mediocrities get critical legs up from their infiltrator comrades at all the right times.

SJW-converged .gov HR reps who smell sulfur at the mere thought of meritocracy aren't going to all the sudden start hiring natural aristocrats and would-be philosopher kings, who, save the most starry-eyed idealists aren't even applying in the first place.

And national politics may be a great way to get rich quick. But that's the problem.