We don't need no stinking legislation! 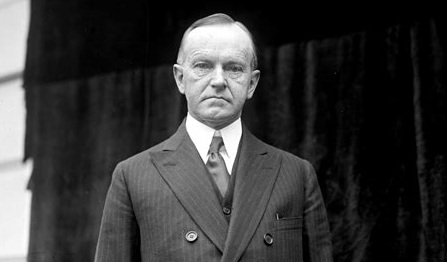 Mrs. Amity Shlaes is a politically-libertarian writer of non-fiction. I read her great 2007 book The Forgotten Man, a history of, and debunking of the common Lyin Press-spread myths about, the Great Depression (GreyDep 1.0, we may be calling it in the not-too-far future).

Mrs. Shlaes has a new book out about ex-President Calvin Coolidge simply called Coolidge, who became president well nigh a century ago. I wrote "became" because he filled the position vacated by the death of Warren G. Harding in the summer of 1923, but was elected in 1924 for one term.

It's not just the cool name "Calvin" (see "Calvin and Hobbs"), but this man was probably the most libertarian of any US President since George Washington (or at least Jefferson), but Washington (the city) hadn't got started wreaking havoc yet just after the US Constitution. President Coolidge was called "Silent Cal" because he didn't have too much to say in terms of bringing about new policy and interfering in affairs of business and foreign countries. He represented what the Presidency SHOULD BE - just a high-level administrative office, in which one may occasionally (well, not "occasionally" for the last 25 years) wear the hat of Commander-in-Chief of the armed forces during wartime, as defined by a declaration from Congress. Yeah, I know, right ... hahahaa.

I don't know how the presidential selection election process has gotten so terrible as not produce anyone close to this man's character and understanding of the point of the United States since Barry Goldwater (1964 R-candidate). Mr. Goldwater lost to scumbag socialist Lyndon Johnson that year by a landslide, so maybe that explains it ...

The one man from recent times that could hold a candle to the principles of Calvin Coolidge would be Dr. Ron Paul - as only a congressman, one of 454, he couldn't have the same effect on the country. Dr. Paul was often derided for "not bringing up a single bill to the ..." GOOD! What's the problem with that? "He's vetoed more bills than ... they call him 'Dr. No!'" GOOD! It sounds like the same stuff the fledgling Lyin' Press of the mid-1920's would have said about the great man Calvin Coolidge.

Amity Shlaes is an expert on this man, as she even runs an institute about him. I like this lady, and speaking of that, she can't look like the still photo shown of her in this < 1/2 hour video, as she is 57 years old. Mrs. Shlaes is not in the studio with the gentleman from the libertarian Mises Institute, so just her still shows. This is just something to be listened to, not watched.

Two quick points, the good and the not-too-bad.

2) As the this blog has pointed out before in What's the deal with Peak Stupidity - Libertarian or Conservative?, libertarians need to learn something from the conservatives about the immigration issue. Most L's are just ignorant about it. Well, I expected, at one small point in this video, Mrs. Shlaes to demonstrate that bit of stupidity. She did quickly mention in this video the 1924 near-closing-down of immigration, but it was so quick I can't even find it right now. It sounded like she was going to raise that as one point against President Coolidge, but this lady may be smart enough not to have ever really bought that line. She and the interviewer just let it go.

Not guilty, your honor, I remember your explaining this to me under that post about Michelle Malkin and Swift Airlines -
https://www.peakstupidity.com/index.php?post=981
Ganderson
PS. As the great Howie Carr would say, Amity Schlaes is NOT GUILTY!