Guernica - The Propaganda and the Movie 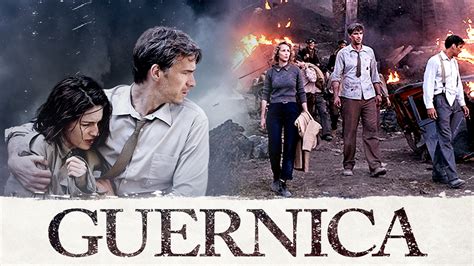 
As we left off earlier on the topic of Guernica, the point was to have a movie review here. OK, it's another Peak Stupidity style movie review, not your Siskell/Ebert type, meaning:

A) We DON'T CARE who produced the thing, who directed it, who's the casting director, and who stars in it, unless there are absolutely no hot chicks - that's 2 thumbs down, right there. We don't care about the lighting or the camera angles or set.

B) We care if the movie is a good story with no serious amount of political correctness. That is all.

C) The DVD player has an off button, and worst case, an A/C power plug, like most other appliances, and CAN AND WILL be turned off at Peak Stupidity's discretion. Yes, nobody says you've gotta keep watching, as written before on the Peak Stupidity blog regarding another movie thusly:

I almost returned it to the video store not finished, as I have done a few times in the past, back in the days when they were VHS tapes: "Oh, sorry, what happened? Did the tape get jammed? Is it washed-out?" "Nope, it just sucks." "OK, then, do you want your money or another one?" I guess I was a member in good standing, as I remember having some kind of yellow membership card.

OK, then, about the movie Guernica:

It is a movie about the severe bombing of this town during the Spanish American War. As noted in the last post, the militaries supporting both sides used this war to test out weapons and tactics. In this bombing attack, the Germans, supporting the side of Francesco Franco and the Fascists or Conservatives/Monarchists (the term depends on who you ask) tried out their new lighting attack ways that would later be used in WWII, starting in Poland.

The target was non-military, and the attack used new thermite bombs in a tactic called firebombing (also later used at 1000's of times the scale in Dresden, Germany and Tokyo, Japan by the allies.) The Germans didn't have their Stukas in this battle, but a collection of 20-odd older airplanes, with, per the movie, no anti-aircraft defense to thwart them. It's terrible stuff to be a victim of, yet there were thousands of terrible attacks and battles during the war as started by both sides. Why did the movie and why does history single this out?

The movie purports to be about the use of propaganda and censorship during wartime. "The first casualty of war is the truth" is a quote you'll hear often. The movie cover claimed that this was the point of the movie, though the IMDB page (linked to above) had more of a general description for movie buffs, and is more accurate, as it's written by viewers. Guernica is about how the news reporters wanted to tell their own narratives in the same way done today. Of course, there is a 3-way love story involved, maybe to pull in the women viewers (sure didn't see any sex, so ... just saying), and there is some suspense that makes the movie interesting.

The point of this 2-part post is simply that this 2016-release movie is a piece of propaganda in and of itself. Both sides in the movie, the "Republicans" with their Commie advisors/handlers and the German Luftwaffe that firebombed Guernica were shown fairly in my opinion. However, the concentration just on this one attack does not tell much of a whole story about a war that hardly anyone's even heard about anymore. In the movie, this bombing changes the American reporters whole view on the war, and war period, but I don't know if he ever got around to reporting on atrocities by the Republican-Commies. That's sure not in this movie.

A couple of minor points are that the German Air Force unit is shown as a group of decent guys but only concerned with efficiency, efficiency. Yeah, that is part of the German way, but the movie really pushed that hard. In addition, the destruction done to the town looks total, yet the actual accounts vary widely in destruction and people killed.

So, we've got a movie advertised as a story on propaganda that is itself a piece of subtle propaganda by telling only a small part of the story with one side doing all the killing.

At least we had the artist Pablo Picasso to record some details for us in the painting below:


Not the kind of guy you want as your Recon man: 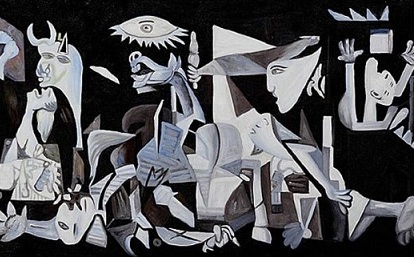 Moderator
PS - Thanks for the compliment, BGC. There are lots of archives (> 700 posts total - go to "Older Posts"), but we have no search engine - formatting sucks for now, but improvements will come eventually.

BGC
PS Been reading a couple of weeks. You've got a good blog.