Can you quit with the theatrics? Just grab the ball already, man! 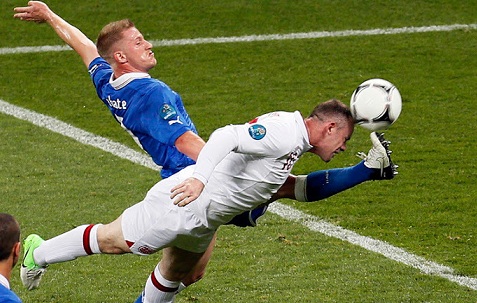 Peak Stupidity's thesis tonight. "Soccer is a stupid game." At least we're not beating around the bush this time, right? This is one of those curmudgeon posts that I've been meaning to write for a year. It happens to be particularly timely now, with those World Cup matches still going on ... or are they? I don't rightly know; I'm not keep track as, ipso, facto, quid pro quo, Clarice, soccer is a stupid game. Debate point - 1 for Peak Stupidity. Hey, shut your pie hole about your old Greek logic, or I'll throw down a flag!

I think it's neat that Ann Coulter agrees with Peak Stupidity yet again. She wrote the column right at 4 years ago, but it's one of those examples of independent curmudgeonry, and I'm pretty sure I would have said this same thing 25 years ago, when Miss Coulter was still a pro-GOP neocon barely out of law school, wet behind the ... somewhere.

OK, in line with Ann Coulter, I have seen where soccer has been sort of foisted on America by the international (let's just call it Globalist) community over the last few decades. Who cared a wit about soccer in the 1980's? It was fun to play for kids, but that was the end of it, kinda like wiffleball. This stuff has been pushed on us, as "futeball" is so international and all, and we can't be all isolationist and different from the rest of the world - that'd be the wrong kind of diversity, I guess. Soccer has still not really been taken to heart by most Americans, whether sports spectators or athletes, so the Globalists have mostly failed on this one thing.

Here's my real problem with the game of soccer It's NOT NATURAL. You may run a 3-legged race expertly at field day in school, once you and the other guy get the concept, but at some point, you want to take that sack off and run like the wind. In soccer, you've got a big ball flying around, coming right at you oftentimes, and YOU'RE NOT ALLOWED TO CATCH IT! WTF is that? It's the same once you've taken the penalty and must get the ball over to another guy. NOW, THEY TELL YOU YOU'RE NOT ALLOWED TO THROW IT! Just try catching and throwing it during a match. You'll get flags thrown down right away (flags are bad, mmmkayyy). EVERY! SINGLE! TIME! We've got 2 arms and hands supplied by Mother Nature, and she wants you to use them. Let me get this straight: We've got 5 digits on EACH SIDE, better than the cloven-hooved creatures, most of the rest of the mammals, and most crustaceans (and cetaceans, for that matter), yet we're supposed to catch a ball with our heads! Who made these rules, George Soros?

I can't do it. Now, I'll give soccer players loads of credit for the physical exertion required. There are no fat soccer players. However, you'll get the same thing by playing Ultimate Frisbee. You ARE allowed to throw the frisbee with no penalties in Ultimate Frisbee. How cool is that aerodynamic flying disk compared to a ball, also!? Do a backhand throw with the disk tilted up to curve right around those two opposing guys into the hands of your teammate! Or, send it into the end-zone with just the right amount of spin and speed for the wind, and have it float like a flying saucer for 5 seconds so your guy can jump up and grab it! That's a real sport, man.

Oh, and in Ultimate Frisbee there's no sudden death ... not unless one of the players smokes some bad weed after the game.


PS: Upon perusing Ann Coulter's soccer column again, I see that she has many different points than Peak Stupidity about why the game sucks. It's worth reading, and Miss Coulter is her usual snarky self.

PPS: Hat tip to commenter Buck Turgidson for bringing up the term "Communist Kickball" and that's the revised title of this post.

Moderator
PS Josep - yeah, it's supposed to be kind of on the humorous side. True, it's football (and the more appropriate use of that name compared to American "throw/run-with" ball), and of course they kick it. I'm not unimpressed with the skill it takes to make all those kicks either. However, I still maintain that it's unnatural not to be able to catch the damn thing, and throwing is more natural than kicking. I don't know about you, but coming from apes and all, my family has always been throwers.

I'm gonna use that, unless you have it trademarked, Buck.
Buck Turgidson
PS Communist kickball