The Stupidity of the Foodies 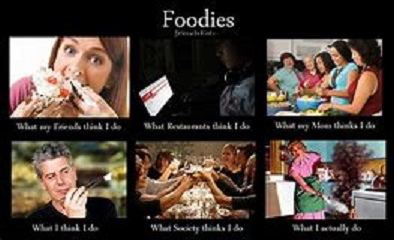 This post has been on the back burner for 3 months now, and it's time to get it out of my system. In addition, I've seen 4 related comments to my point here on unz.com very recently, so let's get ahead of the game here.

Just who are The Foodies? Well, that's their hobby, eating different kinds of foods, new foods, exotic foods, ancient foods, French food, what have you. There's even a Food Channel with Food Channel outlet stores. Sure, there are hundreds of TV Channels with fewer and fewer people tuned in to each one, so fine. Also, there've been (mostly) guys who could have been chefs in other lifetimes, and just enjoy making the quality stuff, either instinctively or by making reference to various 10 lb recipe books, especially the Italians. I GET THAT, it's one of the big pleasures in life, but you'll see my point about the stupidity of some of the foodies in a bit.

Now, after putting on my curmudgeon hat, I've got to chime in, that in my day we ate what was on our damn plate, meaning our Moms would cook whatever they damn well pleased. Going out to eat was just not as frequent a habit as it is for everyone now, single people, married, with/without kids, etc. Upon getting out of the house, anything filling up my stomach tasted pretty good, most of which was the fast food crap.

It just seems like people used to be as picky as they are today, which brings up a quick story: While eating with a girl friend at a Taco Joint called Taco John's the girl expressed distaste with the tacos. I had already inhaled whatever it was I ate, and it was all good to me - once you've got that salt, fat, and sugar in, you can't go wrong, it seemed to me. "You don't believe me? Do you think this stuff is nasty, or that I'm just being bitchy?" "Um, being bitchy", I observed, just going by history. She let me taste them. Yeah, the meat was nasty, but then I hadn't noticed when I gobbled it down. We didn't have to go find an authentic Mexican taco stand, is what I'm getting at, which eventually will lead to the point here.

The situation is different now. It appears that various and sundry restaurants and bars in every city, large and small, are pretty much the lifeblood of this country's economy. I don't know how they can be, but, again, that's all people seem to be doing. It's the young people as much as anyone that spend every extra cent at all the new restaurants and bars popping up. Many of these young people can only get these kinds of service jobs themselves, making the money go round and round with no savings or investment to come out of it, as I attempted to describe in discussion of the coffee shops (more here). It's one thing if the gens riches - that's French for rich people - are the ones spending the nights and the money out on the town, but the restaurant infrastructure now is enough to cover about everybody. Everyone wants to go out for new authentic cuisine of all kinds. Pajama Boy here may be typical of the Foodies: 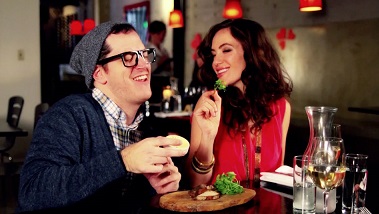 Finally to the point, I believe that, though not the primary driver of it, these ever-growing-in-number Foodies are part of the pro-immigration crowd. No, they don't understand that probably Americans could make this same stuff - there is the internet and all with its millions of youtube videos on how to make and do about any damn thing one can thing of. That's no good, I guess. Yes, what I'm saying is that the Foodies care so much about what their next meal out will be, that they are willing to put up with an invasion of the whole 3rd world in order to have enough places to get authentic cuisine. How selfish is this kind of shit?!

This is not some kind of overarching theory of how America got to the sorry state we're in with respect to large-scale immigration. I've already got that pretty much figured out. (This post makes 95 posts with the Immigration Stupidity topic key! Check 'em out.) This is one more reason the Globalist/Elite types do like that high-level diversity, though. They ARE the ones that can fly across the country to stay somewhere mainly to get a meal. "Hey, there are only, like 4 authentic Somalian food sit-down places in all of Fresno. I go there on business twice a year, and, dammit, this won't do! We need to raise quotas and get some more of those hardworking refugees." Just read an airline magazine some time - "Here's the food you can get in Sao Paulo, here's a list of the best Greek restaurants in Auckland, New Zealand." That's the way they are. However, the middle class now eats that stuff up too (pun partially intended).

To hell with these Foodies and their never-ending quest for more exotic people to cook them meals, then import the rest of the family to diversify the town then go on welfare. Could they not just stay inside most nights, brew their own beer, and pull up some cool new recipes off the internet? It'd sure save them some money too, so they could get ahead in life, if that's possible after paying the taxes and other social costs to support all whom they've imported.

One thing the Peak Stupidity blog pointed out long ago in A good trait of Americans is that American used to be known for not valuing this sophistication and fancy things as much as hard work and honesty. There's nothing wrong with living an unsophisticated existence, and preferring melted cheese sandwiches to exotic French cuisine.

Steve Martin, aka The Jerk explains this very well:

Moderator
PS Josep, done and done. Yeah it's only been a few decades for me too, taking French that is. The "hoi polloi" was in my head, with 180 degree off meaning, Then I used duckduckgo after your correction, making things only slightly better.

Thanks again.
Josep
PS I don't speak French myself, but I think "gens riches" seems more accurate.
Moderator
PS - Thank you, Josep, for your correction. I have fixed the error. I've been told right here in the comments that I need more proofreading, and this is more proof.

Thanks especially for reading.
Josep
PS I don't intend to be a party pooper, but if I'm not mistaken, "hoi polloi" is actually Ancient Greek for "common people". Just saying.
Moderator
PS Thanks to both of you for reading.
BernCar
PS Humor honed to a dangerous edge--+1.
Buck Turgidson
PS Amen to all that. I enjoy a nice meal but the foodies go overboard it all. I think the poor confused things are trying to show sophistication but they overdo it and come off as snobs whose life revolves a plate of food. Yeah it was good but get over it there are other things. Besides in the big city tends to be way overpriced