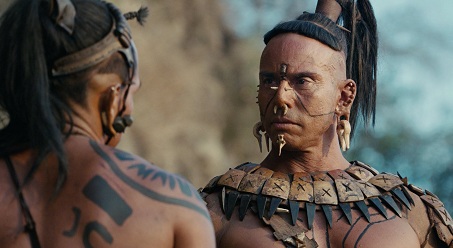 We've just got back from seeing Apocalypto at Peak Stupidity's usual venue, that couch there, about 5 ft. behind me. This movie was made in the year 2006, at which time, our reviewer's thoughts were to the effect of "nah, Apocalypto later.", hence the late review and the post title as we will review Apocalyto Now!

To keep this one more in line with a standard Siskell/Ebert type movie review than is standard Peak Stupidity fare, we will first talk about the cinematography. The movie is REALLY BLURRY! That can be a big drawback and had this reviewer this close () to walking out of the theater clicking on a video of Tucker Carlson instead. Blurriness is almost as much of a drawback as is the 1.2 to 1.5 x sped-up movies that are left on youtube to avoid copyright law. (I believe that's because any music or words in it can't be software-compared to an original, but I'd really like to know if that's the case.)

Yeah, so it was blurry because it was a shoddily-made free youtube video. What do you readers want? If you want a review on a clearer version of this movie, then we expect expenses paid, and that means a gallon bucket of popcorn and a large fountain drink for each one of the entire editorial staff, along with some tokens for the soft-toy grappling crane game in the lobby before the show. Think about that for next time.

Next, the casting: I had no idea Mel Gibson was in the movie until told that well after our youtube screening. Listen, all the faces of these Mayan and other savages had weird-ass warts, tattoos, strings, and various pieces of 1400-era materials strung throughout their faces. It's not pleasant! A young Cameron Diaz could have been in this, errr, film, and I wouldn't be in love one bit with all that facial crap. It just doesn't work for this particular, and any other, cast. This also makes it hard to keep track of who's whom in this Mayan savage vs. somewhat nicer savages movie, which is woefully typical of the pre-Columbian savage conflict genre. The good guys had blue paint on 'em, if that helps at all.

Here's the thing: This movie depicts gruesome, but admittedly historically-true scenes of Mayan sacrificial beheadings and sacrificial non-clinical open-heart procedures. Now, perhaps it's just the queasiness of this particular reviewer, as I can barely stand to watch scenes of those sacrificial anodes in the Corrosion Engineering supplemental learning DVDs. It's just a movie, right, and maybe Cortez, Pizarro, and all those other Spanish conquistadors were just telling the Queen and themselves a load of BS in order to justify grabbing hundreds of metric shit tons of gold off these poor bastards? Ya think? 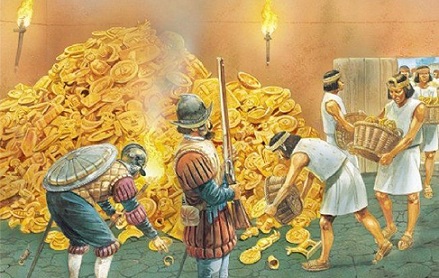 Well, as archaeologists have been determining lately, the stories of these huge piles of 10's of thousands of human skulls were on the money after all. They've been finding evidence of the atrocities committed by the savage American-continental Indians before the white man came over to set them straight. (I don't have links, but would like to point out more of this later.) That's what makes the movie Apocalypto something different from the usual horror-suspense date flick, which tend to involve babies that come out of the womb with grown fangs or guys like Freddie Kruegger. This pre-Columbian stuff is real, man! Put down the smuggled-in gummies and Now&Laters for a minute and think about some history.

I think historians and readers of history may have been too hard on the Conquistadors, who are themselves seen as worse than the English and French in North America is terms of treatment of the pre-existing "folks". Perhaps the Spaniards, who may or may not have had a cameo appearance in Apocalypto (spoiler alert), were just plain disgusted by the nasty savagery they saw in their half of the New World. Can one really blame them for just deciding to kill as many as they felt like and letting the Sun God sort 'em out? Plus, these Mayans, Incas, Aztecs, what-have-you, weren't doing a lot with all that gold and silver they had either - no sound money, not even fractional reserve lending. "A tribe of fools and their money ..." as they say.

This is a still a movie review, so historical politics and political correctness aside, let's wrap this up. Once the blurriness has been accommodated for, and the beheadings and heart-ripping action were in the past, Apocalypto could be viewed as nothing more than one long car chase movie, just like The French Connection but with barefoot chases through the jungle instead of American muscle car chases through downtown Chicago, and a guy who may or may not have been Mel Gibson instead of the hackneyed Gene Hackman. Same-old/same-old there.

Apocalypto on youtube, a delight for organ meat connoisseurs of all ages!