I neeed my steeenking documents, Senor! 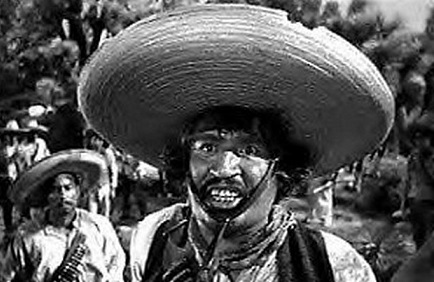 Big-Church has been making bank off of their concern and compassion for people that have entered the country illegally as non-citizens, the technical term being "aliens", making them what ... anyone?... Bueller? illegal ... anyone, anyone .... aliens. Oh, you're wondering about any compassion for parents of American kids who can't get treated at the emergency rooms and can't learn anything in school due to the language confusion and violence from the gangs? No, the Church used up all of their compassion on those illegal aliens - If you are an American, nah they're plum out of compassion.

Yes, and it's the Lutherans up in Minnesota and thereabouts bringing in the supposed "refugees" who will just, like, fit in and all. They are all legally here - that doesn't make it any better for us, of course. The high-level stupidity exhibited by these often well-meaning, but also often greedy, religious organizations doesn't seem to know any bounds, but I'd always thought of all types of stupidity as originating in California. I was therefore surprised that this story, about Catholic Diocesses making ID documents cards for undocumented immigrants illegal aliens comes from Texas. (I linked to this article, due to it coming up after a search involving "illegal aliens".).

Let me put a few pieces of stupidity in here before having a meldown, which I see coming ...

Roman Catholic parishes in Texas are providing church-issued identification cards to illegal immigrants who, because of their status, are not eligible for ID issued by the state. Police in Dallas, as well as nearby Carrollton and Farmers Branch have been officially given discretion to accept the church-issued cards as valid identification.

OK, this could be good. When it's time to go back, we've got a good idea of the numbers, and names, so as to be able to dig up enough charter buses and such logistical items. I like the way you're thinking, Roman Catholics, so far ...

“Having this ID can be the difference between paying a traffic ticket or being arrested for not having a form of identification,” said Father Walsh, according to Texas Catholic. “Also if the police officer need to call to verify the ID information, is easier to take the call and say ‘yes, this person is a parishioner here.’” Bishop Burns said, according to the report ...

Wait, hold that thought. OK, the thing is, were I to get pulled over when I have no drivers' license (I don't mean ON me, I mean, PERIOD), I go to jail. Does it help to "be a parisioner"? If I knew they gave out "get out of jail for free" cards, I'd probably show up at mass a whole lot more often, believe you me. Is this another example of that Anarcho-Tyranny that you read about on such blogs as Peak Stupidity and the like? I dunno, just sayin'. What happened to all that equal protection under the law stuff from the US Constitution? I believe it was in ... hold on... let me check my phone ... Amendment XIV (14 for those of you reading from Alta Vista). Whaaaa? Isn't that the one with the anchor-baby loophole which a bright young, skinny-but-shapely lawyer tells us is bogus anyway? Come on, Catholic Diocesses of central Texas - which is it? When did you stop believing in the 14th Amendment? Oh, do go on, sir ....

What a load of blasphemic bullshit that is! Joseph and the missus came to Bethlehem to be counted in the census. They were not immigrants at all, much less illegal aliens. Does this Bishop ever get around to reading the Good Book, or is he too busy fucking over our country?!

Let me just calm down, that wasn't the meltdown (it's coming...) I need to get this straight. These people who broke into America are now called undocumented immigrants, right? Yet, you want to give each one of them some documents, errr, cards, yeah that's the document ticket. So, if they get these documents they won't be undocumented anymore. Halleluja! But... that would make them now documented, and once they're part of the documented , they must go by the other law which requires a drivers licence to be on the road under penalty of arrest ... so why would they need these documents again... It does not compute ... my clock speed ... increasing ... circuits overloaded and overtemped ... must stop .... blogging.... OK, open the pod bay doors ... I'm outta' here.

Hey, I like that video! OK, all better now. That was from an album (probably) called Songs of the Documented.

Listen, I am completely on-board with the Libertarian concepts of which you wrote here (go to the "Liberty/Libertarianism" topic key - you won't find Lew Rockwell stuff, exactly, but you are preaching to the choir here, man.)

The point is, that, whether it's Constitutional, or per the natural rights of man, man, the illegals are living under a different system. If that's what we should all be living under, well, let's do it, but ...

... let me tell you something, Adam Smith: You may get one dozen readers of the 25 - 30 million illegal aliens in this country to agree with your points above, and probably half of those won't UNDERSTAND it and just say they did.

You don't import people that will vote you into an Orwellian 3rd World - wouldn't be prudent.
Adam Smith
PS

You clearly do not understand the nature of the "driver's license".

The right of a citizen to travel on the road in his or her automobile is a right we all share. Driving is regulated occupation for hire. The automobile becomes a "motor vehicle" only when registered (contract, commerce).

The real reason you need a driver's license is because you have been coerced (by threat of violence) into giving up your right to travel for the privilege of driving. This is a bit of an over-simplification, but it is true. If you have a social security number you are commerce because you have been pledged as collateral for the glorious war debt, and thus have lost your rights under common law.

It's the same thing with marijuana for example. You have a right to grow, use and possess marijuana under common law. Unfortunately you were enumerated at birth and lost your rights. This is why marijuana convictions all involve the commerce clause. The birth certificate is the superior title to the "person" registered in commerce.

Here is the definition of motor vehicle from title 18:

(6)Motor vehicle.—
The term “motor vehicle” means every description of carriage or other contrivance propelled or drawn by mechanical power and used for commercial purposes on the highways in the transportation of passengers, passengers and property, or property or cargo.

There is a lot of legalese in those words. Transportation, passenger and cargo are all words that involve commerce. A passenger at law means someone paying for transport.

Go look up the term driver in the first edition of the black's law dictionary. Then look at how it changes over the years (starting with the 4th or 5th edition) to obscure it's original meaning.

Unfortunately, the 60iq police do not know law, and can be very dangerous in an encounter. Unfortunately the courts, judges and prosecutors are horribly corrupt. Unless you have deep pockets and time to go through the appeals process you will most likely be railroaded and possibly incarcerated.

Traffic laws are just a protection racket to extort revenue for the police state.