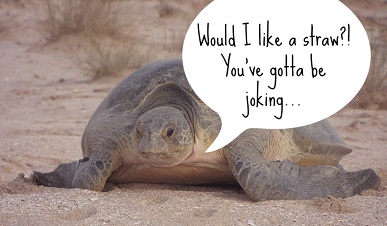 (It's like one of those New Yorker cartoons. You don't think it's funny, but you pretend it is.)

It's been a big brew-haha for a few weeks now, I guess, so this is a post I'd almost forgotten I was supposed to write. Plastic soda straws are bad, mmmkaaay... after ~ 30 - 40 years of use (my memory here) people have just realized that, "hey, these things are killing the planet!" We apparently don't have any other problems more serious than straws right now. Anyway, I came upon a Takimag article by one Joe Bob Briggs, called 500 Million Lazy Environmentalists on this topic. The guy lays out the stupidity reasonably well, but doesn't seem to know a lot of the background of this kind of Environmental Stupidity, so this post and it's 2nd part will attempt to explain the real causes.

Let me first say one thing about one number, as I'll use it later on. No engineering type himself, at the end of the article, Mr. Briggs explains the source of the number of 500,000,000 drinking straws used per day thusly:

Besides, the numbers are overwhelming—the operative statistic is 500 million a day!

The problem with this statistic—the statistic that has driven this movement since 2010—is that it’s based on a single study conducted in 2009. When National Public Radio went looking for the author of that study, they found him in Shelburne, Vermont. It’s a guy named Milo Cress, who noticed that straws were being handed out in restaurants regardless of whether the customer asked for one, was bothered by that, and went on to found a movement called Be Straw Free. But he couldn’t find any official statistics on straw use, so he called manufacturers, wrote down what they told him, and made an educated guess that the number was 500 million per day. It must have been a good guess, because he was rewarded for it. [Note: author's italics became my bold.]

OK, now I don't mind rectally extracted numbers for some purposes, and this is one instance. (And, no, it's not a "statistic", per Briggs, just a number.) Let me explain. Just plain Does It Make Sense?, in-my-head, analysis makes me think it could be too high, but it's not an order-of-magnitude off. Sure, people eating at home don't use straw one most days, but people eat lots of fast food meals that come with straws for all. Sit down restaurants provide them, oftentimes when one doesn't need one, so that seems to be what started this brew- ... err, slurp-haha. I will go with this number with the realization that it could easily be 100% high. I want to look at some basic numbers to see the problem. For that, a 1/2 order-of-magnitude is good enough. Were this a calcuation for engineers or managers in the waste/recycling business, no, that would not be good enough.

That number aside for a while, sudden plastic straw panic is another narrative with the usual sources, useful idiots, and devious greedy evil people behind the scenes. In other words, it's business as usual in the Peak Stupidity of America.

Let's think about the source here first. Somebody has thought what plenty of others have, while sitting down at a restaurant or rummaging through his McDonalds take-out bag. "Hey, what a waste. I don't need these straws. They always put them in the bag." or "They give you one with your fork, knife and spoon, and I don't need one." Fine, I don't like waste, period. It bugs me, and, for the latter case, I will try to catch the waitress in time and tell her we only need ones for the kids. For the former case, I try not to eat the junk food, and am not too lazy/busy to walk into the place if I do have the craving. I'm not a straw guy, but the people at the drive-thru don't want to make a mess on themselves, so they want them. Lastly, good luck at the drive-thru trying to get the straw-count correct. You're just lucky if you've don't have the onions and mayo on the burger, even after you've told the lady 3 times on the microphone, in each of English, Spanish AND Ebonics that "yes, I don't need no steeenking onions, senorita!" You don't sweat the straws at this point.

Now, a few who've naturally wondered about the waste involved in the food service business have taken it upon themselves to get outraged, in particular the drinking straw industry. No, no thoughts about cups, napkins, 1/2 eaten food, oh, and, like 100 million extra people in the country right now! Nope, they are fixated on the straws. It's an easy thing to pass laws about. Ban the straws! It's "doing the right thing", and that impresses some chicks, which is what it's all about for the guys, while for the chicks it's all about being silly and stupid and not knowing much about the world around them. The reason I call these people the "useful idiots" in these matters is that there is usually someone behind the scenes with a vested interest. I'll get to that in the next post.

Is the worry about filing up the landfills? As explained in the Peak Stupidity post Toward Sustainable Stupidity (yes, one of our favorite titles!), there's not actually any problem about running out of space for landfills. It's really a matter of placing landfills further out of the city, due to rightful NIMBY concerns, costing the city more in refuse transfer costs. When recycling pays off in this respect, well, the free market (were there one) would say "do it.". If it cost more to get the stuff recycled than trucking it out to the landfill, then the free market (were there one) would say "don't do it." I'm all for the material being re-used in many products, as Mr. Briggs (in the Takimag article) says, IF IT PAYS. Let's say it doesn't. How much material are those straws we are throwing out every day?

Let's crunch the numbers in our heads, shall we? Now, I have an advantage in doing this, as I seem to have a calibrated eyeball/memory combination. I would have guessed 3/16" diameter (sorry, no SI here, buddy!) for the small straws and 3/8", almost to 1/2" diameter for the big milkshake ones. I'd have put length at 8". Indeed I see that Web Restaurant Store's straw page gives diameters from 1/8" for the kid's school straws to near 1/2" for the massive milkshake intake pipes. Lengths go from 5 1/2" to 8". I was pretty close. I need thickness now.

Without my calipers and a straw (I don't use 'em, see, I'm greener than fresh horseshit!) I would have guessed thickness from 10 to 25 thousandths of an inch. That restaurant supply site has the other dimensions, and talks about thickness, but gives no thicknesses. What a crock - give me numbers, people. Wikipedia - let me down, the innumerate bastards. Ahh, finally, I got to an industrial site and got a dimension of 5-8 thousandths (that's 0.005" - 0.008"), but this has to vary widely from the school straws to the near 1/2" thick ones. One could easily, starting with max. expected suction pressure (I suppose one should start this research at the whorehouse...), calculate thickness required to avoid straw collapse based on diameter. This would not use the normal thin-walled pressure vessel equation, as this is a buckling problem. I'm quite out of time for that, so let's just pick an average thickness of 15 thousandths to account for many of the bigger straws and to be conservative, and use 1/4" as an average diameter. That's .25" x π x 0.015" x 8" = 0.10 in3 of plastic per straw - didn't even need a calculator. 500 million x 0.10 in3 = 50,000,000 in3. Sounds baaaaad? Nah, divide by 1728 to get a number near 29,000 ft3. Sounds baaad? That much could fill up the space of a decent sized house (oops "home", sorry), with 10' ceilings. That does sound like a lot of plastic to throw out per day, but that's the whole country (and based on a probably-high initial count and conservative estimates on material volume). If you live in a medium-sized city, with say, 100,000 people, which would have an infrastructure to support a landfill etc., that is 0.03% of the population, hence, straw use abuse, meaning only about 10 ft3 of plastic to be thrown out each day. That's a cube with 26" sides. Sure, that's with ALL of the air out of it, which is the job of compactors. It may be a cube of 3 ft sides, i.e, ONE cubic yard. OMG! Have you ever been to the trash transfer station or the landfill? I think your landfill will be just fine.

That may have been pretty boring there, but, hey, if you're going to be numerate about it, and understand the problem, than, yeah, some quick calculations are needed. The next post will get more into the stupidity aspect of this environmental crisis, or are they just bringing up another strawman here?

(I had to get that joke in somewhere, right? Yeah, I'll get into the behind-the-scenes shenanigans involved in many of these environmental schemes along with more on milkshakes.)

Jimbo
PS - financial stuff from zerohedge - may be of interest: