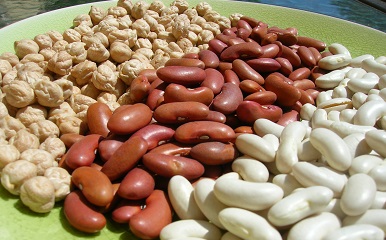 I'd promised (or threatened, depending on how you like this stuff) to give more anecdotal inflation numbers from recent history. As I've written, that Shadow Stats site has much more comprehensive and accurate information than Peak Stupidity could come up with. Inflation calculations (along with other important econ. statistics) is their bread and butter; stupidity is ours. This post is just from prices that sit in my memory, but lots of them are ones I remember very well - why, I don't know.

While still sticking to food for the time being, let's talk beans. OK, bean prices, that is - for recipes, you're much better talking beans with a beaner in the bean aisle. There was a period 8 years ago in which our household consumed a lot of beans... garbanzo beans, red beans, black beans, pinto beans, black-eyed peas, lentils, stewed beans, fried beans, baked beans, refried beans, rebaked beans ... yeah, the whole Bubba Gump thing with beans instead of shrimp. At the grocery store in which I bought 90% of them, almost all of the dried bean varieties stood at $1 per lb. Getting back into beans lately, we've found these same packages at $1.50 per lb. That ain't no 1-2% inflation, mi amigo reader. It works out to annualized inflation of right at 5%.

I'd bought canned Campbell's soup back 30 years ago to eat as supper for $0.45 to $0.55 per XX oz can. They are now in the range of $1.00 to $1.55 for a smaller can, and yeah, you have to have a good memory to catch these things (the shrinkage especially - 12 oz down to 10.75 oz.) On a per-mass basis, at the price mid-range, that soup's gone up in at an 3.5% annual rate. "Sure, sure..." you may say, ".. pick and choose and you're gonna find big numbers." I don't think that's the case. I am picking items that I just happen to remember numbers for, but there's not much in the grocery that I can't look at and get some idea of how much the price has increased since I started buying groceries (or, at least, buying that item).

Let's get outta the grocery then. Let's talk lumber. That happens to be a product that I bought a lot of also 25-30 years ago. I didn't have projects to buy lumber for, for many years after, but have bought some over the last 10 years. 2 x 4's are just a superb example (pressured-treated or non), as they are luckily still the same dimensions* and made out of the same trees that they were when I first bought them. From well under a buck for a non-pressure-treated 8-footer, I recall $0.79 or so to up above $2 - $2.50 now, that's the increase over, call it 30 years. There we go again, from 3.5 - 4%. The rest of the 2-by's along with the "1-inch" lumber has gone up accordingly.

I'd really like to get into gasoline prices, but that is a commodity the price of which definitely depends on politics, no matter what politics you figure. Gasoline is a big enough part of a household's budget and it's such a volatile (get it??) commodity, that the stats people like to exclude it to get at the "core inflation". Maybe by "core" they mean "the FED", as that's the basic cause. I will put up a post on gasoline prices during recent history, with some anecdotes, because it's just personally interesting.

Let's even get off of products and get into services. This does sound harder, as how much have services changed to disallow comparison? I've got one - auto insurance. See, these older vehicles are all insured at the same basic coverage as required by state law. I'm with the same agent (though I've tried shopping around - they make it very very difficult ...). I won't give too many details, but the total on the vehicles has gone up from $310 only 8 short years back to $415 for the same coverage/period. Aha, that works out to 3.7 % annual inflation.

If I were to get into health care, a topic the Peak Stupidity blog has covered a bit already, things would just get crazy. It may indeed be difficult to compare the value of plans without a group of a dozen accountants with spreadsheets trying out many different combinations of illnesses or treatments under plans with different deductibles, co-pays, in-network rates, etc. Sure, that's true, but I can say this: I doubt you know one soul whose (nominally-same) healthcare plan has not gotten much more expensive over the last decade. That last decade encompasses the stupidity that goes by the name "Øb☭macare", but one can go back 4 decades and say that basic healthcare has continuously gone up much more than then our 4-5 % range seen in the anecdotes here.

Now look - again, this is no statistical inflation study, just anecdotes, mind you. I've had a long habit of not believe everything some US Feral Gov't agency tells me. This is just material to back up my contention that inflation is higher than "advertised".

Is this difference a big deal? "Wow, you think inflation is 3- 4 % vs the Feral Gov't's 1.5 - 2 % numbers", the reader may say, sarcastically. "So what?". Here's what: Over a decade, everything you had saved in dollar form loses 1/3 of it's value.** Did you work 10 extra hours weekly that one WHOLE YEAR to save those 7,500 AFTER-TAX bucks that you put away? So, sorry, that's worth only 5000 bucks now, or, put another way, 4 months of your working 2 hours extra every evening has been taken. "We took it. That's how we make a nice living.", sincerely, your friendly Central Banker.


*The 12 oz. can is from memory. I will have more to say about this shrinkage in another post, especially as related to lumber.

Moderator
PS - Yes, lots of stuff is of poorer quality, not just food. Much of the rest comes under my topic key "Cheap China-Made Crap". The BLS uses a trick (some may call it) called "hedonics" that is supposed to account for better quality or performance (computer hardware as the best example) to adjust inflation numbers for. However, I don't see anything ever about adjustments for poor quality requiring replacement of shoes, for instance, at twice or 5 x the rate.

Thanks for writing, James, and welcome to Peak Stupidty (I don't just mean the site!)
James M Dakin
PS Prices for the basics ( working minimum wage, living in an RV park, peasant food-as cheap as you can be as working poor ) have gone up at least 200% in the last thirty years. BUT! The quality has really decreased on everything, products and services. Sure, wages only doubled, but it wouldn't have been so bad if the quality hadn't dropped so far. All that would have happened then would have been your saving rates decreased ( basic expenses subtracted from wages-you used to only spend half, now it is three quarters ). Now, with quality decreases, you are living in poorer health. I used to eat beef and fruit on a minimalist food budget, and it was tasty and healthy local fruit and meat. Now you must eat mostly carbs and the food is full of crap. A place to park is more crowded with far fewer perks. Now what park rent was is a minimum payment on your own land, which in the long run is cheaper, but quality of life is down a bit off-grid. Welcome to the jungle, herbivore.