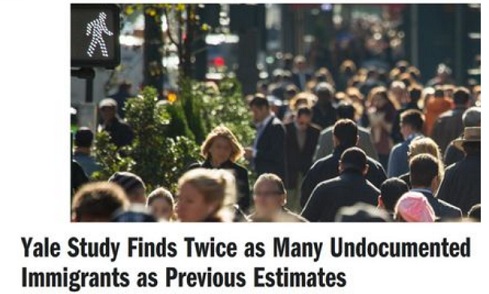 That is hopefully no slur on Peak Stupidity's loyal readers, just the 329,999,971 other Americans who get their stupidity off the Lyin' Press. It's been 2 DECADES now, that we've been hearing there are 11 million, oh +- a half million, per somebody's rectally-extracted value, from that time. (I.E. it wasn't necessarily near the mark in 1998 either, but definitely lower than now. I quote Peak Stupidity here from 1 2/3 years back, in Illegal Aliens effect on Election '16:

Let's be realistic about the numbers also - this 11 million number is total bull, as that number of illegal aliens was claimed back at the turn of the century, and it was rectal extraction-based, just as my 30 million right now is. I could see there being 5 million illegals just in California, and yes, I have spent time there.

Ann Coulter has used a working number of 30 million illegal aliens living in America since at least this column, from 2013, but I have no idea if she had written that earlier (she writes A LOT about this subject!). Her numbers, as I recall fairly well, but from a different article, were from estimates from financial firms.

Do you see first why I had the quote marks around "models". Monte-Carlo simulation? 1 million simulations? Give me a break, researchers. That's for physics. This estimation of illegal aliens doesn't require "modeling". Just find a good way to obtain your raw data. There are probably many ways to go about it this estimation, but you don't make a model of it all together. You try different methods, compare, try to find flaws in the ones that are outliers, and come up with a number with a tolerance band. I'll give them credit for not giving a number with a precision of 1 million, but this sounds like it's not much more accurate than my rectal-extraction figure that matches Ann Coulter's.

Most numerate people with common sense (they don't always go together) know that the number of illegal aliens is nothing like 11 million. Instead of this article being named "Yale Study Finds Twice as Many Undocumented Immigrants as Previous Estimates", I'd have named it "No shit, Sherlock".


* See VDare take on this by Steve Sailer with comments here on unz.com.