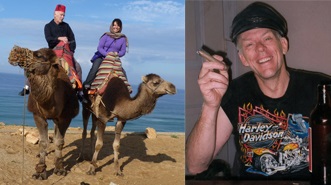 When I cut off the previous post, I was not done venting my feelings about the pundit Fred Reed, he also being an example of plenty of others that annoy me with hypocritical stupidity.

From a pundit who used to lay out very well and entertainingly how this country has changed for the worse, he is now not just all things Mexican, but anti-every single thing about America and Americans. He writes that Americans should calm down about the huge illegal alien invasion, learn to get along with the Hispanic people living here (people HAVE been pretty damn tolerant, Fred), and appreciate Mexico more. On that last point, he seems to always look at Americans as rubes, who don't get out enough to dispel their notions of Mexico being nothing but corrupt Federales (well, they are!), donkey sex shows, travel via burros, and siestas. Americans, in fact, travel a lot more than when I was younger, and especially when Fred was. I seriously doubt, with their significantly lower average income, that Mexicans are just worldly wise, and don't have any erroneous stereotypes of America and Americans.

Anyway, I can let all that go. What angered the hell out of me enough to write these 2 posts, though, was more than that. Fred Reed is now against the opinions and work of any Americans that are trying to FIX the damn problems that he bitches about bi-weekly. Mr. Reed complains about America becoming 3rd-worldy, yet he hates the writers from VDare who have been documenting the increasing problems due to the huge influx from, oh yeah, the 3rd world! (I still wonder whether his animosity toward VDare is just over money, maybe a coupla hundred bucks, as he used to write for them for a short while, then he didn't.) Mr. Reed writes nasty things about President Trump and the deplorables who support him in order to fix the problems that Reed has been pissing and moaning about for a coupla' decades.

Let me just put this in imaginary-conversation form to make it real clear why Fred Reed sucks:

Americans: "We'd love for Mexico and Mexicans to stay as they are... down there. Too many, including a lot of the worst of them, are living here."

FR: "It's a done deal. You've got to live with them. There's 50-odd million Hispanics in America. They've been assimilating just fine. I'm not arguing you need to let more in."

Americans: "No, they haven't been assimilating, or we wouldn't even be worried about this. We just need to stop the flow with a wall, one of the primary reasons we voted for Donald Trump."

FR: "A wall is such a stupid idea. Walls don't work. Trump is an idiot to talk about this stupid wall."

Americans: "Sure a wall will work.* The problem is that President Trump has not come through for us."

Americans: "Uhh, no, we kinda wish he were, but if Trump were a tyrant, we'd have a border wall with Mexico."

FR: "Trump is a tyrant! And, you have all sorts of stupid stuff happening with SJWs, feminists, corrupt politics, and the police state, that I've been watching on TV."

Americans: "That's what we are trying to stop by electing outsiders, like Trump. We've been making websites, writing articles, giving talks, getting out the vote, and putting down our hard-earned money to try to fight this stupidity."

FR: "You're all a bunch of mean, xenophobic fanatics."

FR: "Your country is going down the tubes. You've got so many groups of people that will never get along. It wasn't like that in my youth. Now, it's bad, so I left."

Americans: "Yes, you're quite right. Our best bet now is to stop digging. Then, maybe we can fix things."

FR: "Fix things? You're a bunch of hateful Americans ..."

Fred Reed writes often of his upbringing in the Tidewater area (the SE) of Virginia, when America was still the freest land ever seen on this Earth. Since he's left there, he's traveled the world, writing about this problem and that. Now, from Mexico, where he can't do anything to help, he writes about this problem and that and those damn hateful bastards that think they can fix things. Has Fred Reed ever done anything constructive since he left Tidewater Virginia? He's made a living documented the stupidity, but has never lifted a finger to fight it. That's why I titled this "Fred Reed's Lifelong Siesta", the former working title being "Fuck you, Fred Reed!"

Agreed, as an expat of 17 years in 3 s American countries.

Most expats are not motivated and fight against dependency problems.

As a general observation, any person who actively works against their own in a struggle for survival is mentally troubled.
Moderator
PS: Your description is right on, BC. On the philo-Mexicanity business,I don't try to get into people's family lives, unless the family are themselves very political. In the case of Mr. Reed, he has written a number of times about his very learned and intelligent Mexican wife. I do wonder if he's worried about her reading the posts, and writes his pro-Mexico stuff with that in mind.

When the majority of his commenters (least on unz) disagree with him, Mr. Reed has a habit of badmouthing them as rubes, idiots, whatever. That'll never happen here... not unless some hard-core Commies start chiming in. That'd be interesting though.
BernCar
PS From the start, his writing put me off a little. Even when I agreed with the points he made, it seemed to me that he had adopted this pose of a curmudgeon, say H.L. Mencken as a country boy. And then he added the gonzo journalist bit and a little of the grizzled visage of the city desk editor, a man who has seem much and forgotten little. It seemed contrived, too try-hard. Even his philo-Mexican posture seemed assumed so as to appear contrarian.