Trump and the Caravan - Part 1 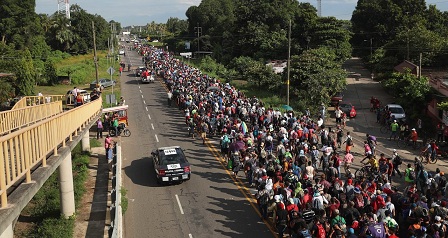 The last I'd read was that there are supposed to be 7,500 Central Americans in this Caravan 2.0 of the ongoing, as-of-yet unopposed, immigration invasion of America. Let me tell you what happened after the last one, what was it, 1 1/2 years ago? I tout VDare as the go-to site for information on immigration stupidity for a good reason. They have detail-oriented writers, general policy idea writers, insiders and outsiders, all of it. The story on that last caravan was that almost all of the illegal invaders were let in.

Let me explain. We have "rule of law", allegedly. There is processing to judge the validity of these "asylum" claims (pretty much a mockery of the term, that), then individuals are put into categories. Unless one of these people JUST HAPPENS to be identified as some wanted criminal, he'll be given some case #, be told when to show up at the proceedings, etc., etc. They are no longer detained after a certain point, just told when to come back! Yeah, would any of these people be likely to come back to go see the judge? Could any of them be identified once they leave the area? NO and NO. "We don't neeed no steeenkin' processing, Senor."

Peak Stupidity does not know all the details, I freely admit. I do have the big general picture, and part of that is that this big Feral Gov't bureaucracy is not on America's side, as of yet. That is President Trump's fault. He has every right, as head of the executive branch, to fire, fire, and fire employees, until he gets the kind of staff that will implement patriotic Americans' wishes. I've been through this before (I think). Judges can make all the judgements they want, but these ICE/Border Patrol/etc. employees have lots of discretion, just as a prosecutor does. Try going through immigration via the proper channels as an American, at an airport, and see how much trouble in CAN be, if the guy wants it that way.

Now, Americans have many suggestions for the solution here - confiscate or block remittances (money wired home to Ole Mexico), start closing consulates, etc., and Trump has his threats 2.0. It's all kind of pathetic, really [/Deputy Fife]. After all, right now, these many thousands of Guatemalans (along with probably other mixed-in potential trouble-makers of all sorts) are still in the territory of Mexico. It shouldn't be our business where they march - a REAL COUNTRY would have a REAL BORDER that'd be a waste of time for 7,500 people to march 2,000 miles toward. It shouldn't matter. Instead right now, we have a policy of hope. We're hoping we can stop an appreciable amount of 7,500 people from illegally entering and staying in our country at will. Yes, that's our strategy.

This post is not just about, and America's problem not just with, this, and that last, caravan of unwanted illiterate 3rd-worlders entering, or being let to enter. It's a big show right now, and though the numbers are not small, they are pretty much negligible compared to the everyday illegal entries that have been going intensely for > 3 decades, getting us up to estimates of 30 million or so. We don't know definite numbers, due to the obvious undocumentedness of it all, but this caravan could be a few days worth, and maybe a week's worth of illegal entries going on all year long and not publicized as this big piece of infotainment is.

The deal is, though, that the immigration problem is again being brought to light, really by both sides. I believe the ctrl-left are so confident now that they have their whole base of voters energized by showing this illegality and impending destruction of the rest of America. The Republicans, at the same time, are glad this will bring the pro-Trump base out to vote, after seeing this on TV. The follow-up post to this will emphasize how the result of this election might not change a damn thing about the overall problem. It'll be more about President Trump and the voters and less about the caravan. (It should be tomorrow - trying to beat the caravan, at least!)

Moderator
PS: I agree that they are not serious about it, but it doesn't preclude them (some of them) from being stupid, either. I think at the real high level, these people are "citizens of the world", or at least they think so. They figure they'll always have a place to bug out to IN STYLE.
BernCar
PS I don't believe that people in power have been serious about stopping illegal immigration. There are laws that are not being enforced and there is plenty that Trump could do in spite of unsympathetic judges.

I understand there are reasons for this (cheap labor and Democrat votes) but surely there are powerful people who can see the problems here. Big problems that I can't imagine would benefit anyone. If I WANTED to instigate domestic strife, I couldn't devise a better way than the policies in effect now.