Americans against the VietNam war and for "civil rights": 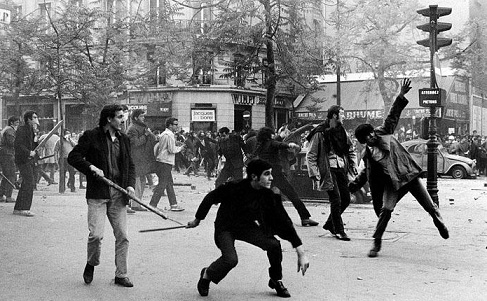 Pundit, and former Presidential candidate Pat Buchanan wrote a new column, Is This Worse Than '68? with a comparison of the violent political climate of 1968 America vs. one-half a century later. He maintains that back in 1968 and the years surrounding it, between the political assassinations, the dirty politics, and the real violence from bombs and riots makes today's America, with the Synagogue shooting, fake-bomb plot, and general ctrl-left violence not so bad in comparison.

A lot of craziness went on alright, back in Pat Buchanan's day, but the craziness now is on another level. It's not just that the issues have gotten stupider by an order or two of magnitude. It's also just that the people arguing for most of the stupidity aren't necessarily Americans by any normal sense of the word. In 1968, though there may have been many more specific acts of violence (see, Mr. Buchanan's reminiscence of seeing hippies get their asses kicked by Chicago cops from his 19th floor hotel room.), the gulf between the basic two sides was not irreconcilable. They were all Americans, who could have been united very well, had it not been for one sides subsequent long march through the institutions to produce the people seen here:


Americans in name only, protesting for some kind of stupidity or another: 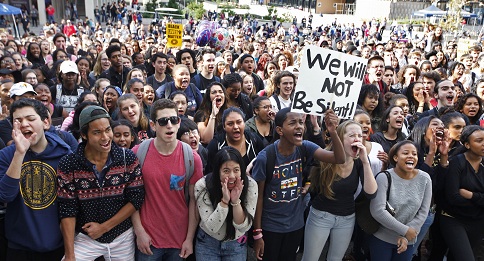 As much as I'd have liked to write more on this, a commenter called A.P. submitted this excellent comment on unz that I will just include here verbatim.

*********************************************
2018 is far worse than 1968, and it shocks me that Buchanan cannot (or will not) see the obvious difference between then and now: back then the United States was an ethnically unified country (mostly); it was 90% white in 1960. So, regardless of temporary domestic problems, it could always bounce back. And it did. But this time is fundamentally different. The United States is now an empire filled with enormous numbers of disparate racial and religious groups who all hate each other, and it gets worse every year. I can’t anticipate a movie, watch a television series, play a videogame, read a comic book, or do anything else in mass media without hearing of some ethnic squabbling between groups. I fear there is no possibility of a rapprochement this time. Empires don’t bounce back from the edge. That’s what nation-states are for.

One of our political parties, the Democrats, are a loose coalition of diverse peoples who, according to most polls, do not really agree on many different social issues. This party is united only by their ethnic hatred of the other party, the mostly white Republicans. The few blacks that support the Republicans are openly attacked by media like SNL, so there is no chance of racial reconciliation. Every election will be a racial headcount. Every election cycle is now dominated by media efforts to gin up anti-white hatred so the democrats can win. BLM in 2014, anti-Trump hysteria and attacks on Confederate monuments in 2016, mass immigration support in 2018 by the media to drive up Hispanic votes and endless “get Becky” stories posted on YouTube and in the mass media. The other political party is corrupt and incompetent. It serves the interests of the business class when it isn’t busy selling out its voter base.

The backbone of the country, White Caucasians, have come under years worth of blistering racial attacks in the media, and the polls show them cracking under the pressure as a result. Patriotism is at its lowest recorded level in one poll I’ve seen, mostly because whites are giving up. The military has missed a major recruiting goal for the first time in 13 years and is having to turn to urban areas, probably because whites are refusing to join. Foreign presidents like Putin, Bolsonaro, and Duerte command the respect of increasing numbers of Americans disaffected by their own corrupt, inept government. All while the Chinese are stronger than ever and growing stronger. After Charlottesville, one poll of this military you guys put your faith in stated that up to 70% of them would support using the national guard to put down law-abiding protestors…scary. And only about 30% of officers voted for Trump, most voted for Hillary!

Americans no longer control their own media, most of it being based in NY, LA, or DC, which combined have less than 10% of the nation’s population; these various outlets post insane propaganda for the government Ruling Class – calls for wars and even violence against Trump supporters like Sarah Huckabee. Late night “comedy” shows and Hollywood are wall-to-wall propaganda and vile insults against our leader and his voters. These networks monopolize the entertainment industries while keeping out contrary views, even blacklisting guys like James Woods for his political beliefs and canceling shows by Tim Allen. Dissidents are hounded off social media and fired for the slightest misstep (Megyn Kelly and James Damore). That same media has been banning dissidents like Alex Jones and platforms like Gab. Now, Slate magazine (the same outfit that wrote an article entitled “Let’s Blow Up Mount Rushmore”) is claiming that those who support fundamental freedoms like speech are immoral and misguided – all done as a prelude to censorship.

Consider what we have seen over the last eight years. Mobs of Maoist Red Guards have attacked our statues and symbols, sometimes even desecrating grave sites; a Wisconsin town voted to remove a Confederate marker of a mass grave of innocents murdered purposely by Union mistreatment. Major NY-LA-DC media advocated blowing up Mount Rushmore. The West has been plagued by terrorist attacks and the government has responded not by limiting immigration but by installing a police state. Obama flooded conservative areas with refugees (future democrats) the way China has flooded Tibet with Han Chinese. There have been thousands of articles written about “white privilege, white males, manspreading, mansplaining” and innumerable other combinations of bigoted words. Dissidents have been banned from the internet. The government continues to pick more foreign wars against the wishes of the public. Mass immigration continues unabated while mainstream media gloats about replacing whites. Edward Snowden revealed the government has been breaking the law and violating the constitution for decades.

Here’s an example: they hacked Yahoo Chat and set the thing to take pictures of users; it has been estimated that up to 11% of users took their clothes off…and that data is stored in the UK and retrievable now with facial recognition software. The only explanation for that bizarre episode is that they wanted to create dossiers of dirt on potential troublemakers (i.e. people with contrary opinions). Say the wrong thing on social media and it will be, “oh, look at those disgusting pictures of you doing XXX…those dastardly Russians hacked us and released the information…sux for you dude!”

Government officials also participated in a plot to overthrow the government with a fake Dossier and FBI warrants improperly submitted to the secret FISA court. They even tried inserting a mole into Trump’s administration and tried to cover it up when it was revealed. The NSA and CIA act as the East German Stasi did, often clandestinely digging up dirt on Americans and passing it to the police. Top level retired bureaucrats like John Brennan have stoked fears of coups with talk of treason on mass media – aided and abetted by propaganda organizations like MSNBC. The media is now clearly trying to encourage a mad man to kill our president with their rhetoric. There is no other explanation for their behavior as Trump hasn’t been THAT bad.

The democrat party and its media have given up on liberties like the presumption of innocence for white males; see what they did to Kavanaugh. There have been multiple high-profile stories of late where innocent men were convicted in the court of public opinion because they were white: Duke, Virginia, Kavanaugh … Freedoms like speech are soon to be banned. Gun rights will also be severely curtailed as banks are already trying to put gun shops out of business by refusing them service.

Are these the things that happen in a stable country?

About the only thing Peak Stupidity disagrees with is the very last part, predicting a likely dictatorship by the Democrat party. These people couldn't organize a square dance, so they themselves will never be our masters. The Neo-Bolsheviks, or ctrl-left, that have infiltrated the country since 1968 will not get to accomplish what they did in Russia and China last century. The patriotic American people are still armed to the teeth.

Moderator
PS: Thanks for the interesting comment, Historian. I assume by "liberalism" you mean "classical liberalism", (called libertarianism nowadays). In America now, it's not JUST that there are these various ethnic groups that can't satisfied under a republican form of government, but most of them do not have an appreciation for what the Republic of the US is (supposed to be) about either. We are importing people who will not keep classical liberalism and respect for the Constitution going.
Historian
PS

Austro-Hungarian Empire used to be a lasagna of ethnic groups, intermixed thoroughly. Then the spread of AD 1800s liberalism put them in direct conflict by replacing local autarky with market competition. As Metternich had feared, some groups did well, others did not. Those who did well became contemptuous of these who did not, those who did not developed a belief that those who had should pursue a career fertilizing crops personally. WW I comes along, central authority vanished, and suddenly the ethnic map was drastically simplified.
That's what we're playing around with. "Willie saw some dynamite, couldn't understand it, quite . . .", as the muses have sung.
Moderator
PS: "Don't bet the ranch" is right. Better off to find a bug-out ranch, because things are still NOT EVEN MOVING IN THE RIGHT DIRECTION!

To really stop the stupidity, feminism would have to be squashed like a bug too. As you may know, my feeling is that all the stupidity will end when our financial stupidity results in a crash, and "shit gets real". It's not gonna be pretty.
BernCar
PS Yes, in terms of political discord, it is much worse now than in 1968. If we stopped illegal immigration now (and this is feasible), and if 30 million illegal immigrants left (possible, but I'd give it less than even odds), then we could have a chance of keeping the country together. That looks like the blue-sky scenario. We can hope, but don't bet the ranch on it.