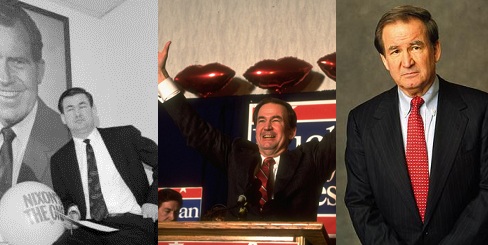 ... and Pundit. The bulwark of Conservatism of > 5 decades running turned 80 years old yesterday. A guy named Wayne Allensworth wrote this great article in reflection called Pat Buchanan at 80—“Right From The Beginning,” After All. I won't excerpt any of it, so please read the whole thing, and one can make comments under the article at unz.com here. Additionally, I noticed this morning that Steve Sailer had a simple one-line "Happy Birthday" post, but it'll have many interesting comments underneath, as usual.

Peak Stupidity has written posts in reference to Mr. Buchanan's columns often, when they appear on unz. I noticed that there are too many to list here quickly, so click on that Pundits topic key find some. As I wrote already, it's been over 50 years that one could have heard from the man in some capacity, as a speechwriter for President Richard Nixon*, TV pundit on Press the Meat (or something), 1992 US Presidential candidate, and current-day widely-known pundit, and I've never had much of a disagreement with him in all that time. One might say, "why would he care?" what Peak Stupidity thinks, but I've heard that Mr. Buchanan is a very personable guy, and not some cold-hearted political ass-kissing wonk (more on this in a bit).

It seems like Mr. Buchanan looks back fondly at his time being on the conservative side of the battles of the 1960's. He knew things were going wrong then, but the next 20 - 30 years showed a false recovery in the conservatism of American society. I wrote "false" there, as, even with Ronald Reagan's presidency, and things in society having gotten steadily less wacky during the '60's-era wind-down - say 1975 through 1980 - things were NOT right again. During that time, the '60's radicals were steadily infiltrating all of the institutions: governments, universities, and the press. It's not that Pat Buchanan, the John Birch Society, and others weren't aware and warning us of this stuff during this time. As Peak Stupidity discussed in When did the Feral Government get OUT OF CONTROL? (Part 2), it wasn't really until the mid 1990's that one could see things would continually move in the wrong direction, against both conservatism and liberatarianism.

Just before that, in the spring of 1992, Pat Buchanan threw his hat in the ring for the Republican nomination for President. Now in case the reader was not much around/aware and not interested in political history, the presidential race in 1992 was not a simple 2-way deal. Mr. Ross Perot (a smarter, proto-Trump, as it were) entered the race in late February, just one day after Pat Buchanan WON the early New Hampshire primary by a few thousand votes over the incumbent George H.W. Bush. It would have been very nice to have those 2 choices, but would have probably happened is what DID HAPPEN - the D candidate, Bill Clinton, won the 3-way contest with 43% of the popular vote and 370 electoral votes. 37% / 168 went to Bush, and Mr. Perot got 19% of the popular votes, but won no states. A little more from the link just above on Ross Perot:

Ross Perot ran for a 3rd party ticket in 1992, eventually named the "Reform Party", but that name may have come later on. However, by 2016 primary time, or even 2012 with Ron Paul, the 3rd party option had almost been completely suppressed by the 2 wings of our red/blue = purple party with complicity of the Gov't Media, aka Lyin' Press.

Interestingly, but not coincidentally, Mr. Buchanan ran in 2000 as the Reform Party candidate, following in the footsteps of Ross Perot, who was possibly just "sick of all this shit" (MY WORDS, not his!!)

I can remember wanting nothing to do with George H.W. Bush, after his reneging on his "read my lips, no new taxes", along with the realization that he probably was no friend of conservatives, but just a neocon (though I admit I didn't understand the concept back then). Mr. Perot should have gotten my vote, but his Deep-State induced dropping-out/coming-back in the campaign turned me off, as I didn't understand that well enough either. NO, are you crazy? Of course I didn't voter for the sleaze bag, just back to "L" for Libertarian. One can look back and think of how much better we all would have been if Mr. Buchanan had prevailed. The Lyin' Press was pretty much geared up pretty well in 1992, and they were gonna have none of the upstart true conservative getting very far. They buried his campaign as they did for Ron Paul 20 years later.

Now, to the 3rd picture of the man today. Peak Stupidity wrote in Future Alabama Honorable Senator Roy Moore and the Supreme Court that Mr. Buchanan is just too civil and decent a guy to argue with the ctrl-left in the CE (Current Era) This parallels, on a large scale, the old-fashioned trusting American society's naivety in dealing with the ctrl-left's implementation of refugee-importation, tolerance for the BLTG-QWERTY nonsense, University stupidity, gun-control, and the slow-but-steady imposition of Socialism. People have been trying to compromise and play nice and fair with evil. The evil keeps on pushing. They do not want compromise. Mr. Buchanan writes a lot in a manner that would fit fine in 1985. From the previous link:

He writes about political strategy as in how many votes "we" get if this happens, and what the Senate rules are with the "nuclear option" having been set up by the D's, and it's gonna work against them .. blah blah. OK, you DO know how all this works better than a lowly Peak Stupidity blogger, Pat, but listen, things are not as civil politically as you are used to, and they are quickly getting even less civil. The rules don't matter to the cntrl-left, and most of the people we think are on our side are not on our side. I have not seen ANY political legislation/ruling/whatever go in the RIGHT direction since the EARLY 1990's, Pat! The elite have been getting what they want, one way or another.

Sorry if that sounds harsh. Again, Pat Buchanan is just too civil for these times. That doesn't make his writing wrong, but as things more along, prose writing ability may not be as important as simple ad-lib talk from your Tommy Robinsons instead. (30 seconds from him here.) The times of convincing people with logic on political issues is gone. I think if Mr. Buchanan were 30 years younger, he'd probably agree. Change ain't easy, and we dont' want him to change anyway.

Happy Birthday to a true friend of conservatives over the many years!


Lastly, the Media Stupidity tag is attached, as I was floored** by the search results from bing.com in a search for a few facts on Pat Buchanan's TV career: A search for "Pat Buchanan Meet the Press" gives the following at the top (excepting one youtube video above them). No, there's no bias at all there at Bing - of course not! 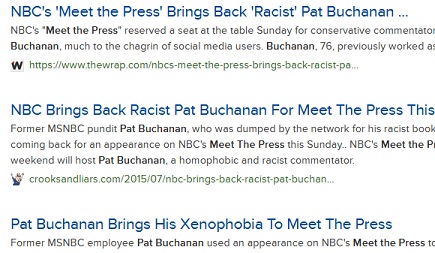 * Hey, the guy was President, so I guess that gave Mr. Buchanan the best venue for his conservative views, but, man, Nixon is no favorite of Peak Stupidity. Probably his stance on law-and-order during the turbulent times of the late 1960's - see again, PS post - may have been the main reason to like the guy. However, his financial stupidity in un-tethering the US dollar from real money, his stupidity in supporting, even promoting, Affirmative Action, and other forms of stupidity too numerous to discuss, made him no conservative at all. The hell with that guy.

Don
PS Sobran was a real dick in person. People who have dealt with him have told their stories. In sum total not a very nice guy.
Moderator
PS: I think it was Peter Brimelow of VDare that had an honest take on William Buckley when Buckley died some years back. I had never kept up with this pundit vs. pundit stuff, and didn't know till you wrote in that Buckley "excommunicated" Mr. Buchanan.

It sounds like Buckley just wanted to be the big fish in the little pond, and he wanted to keep it all "respectable" to the people that should not be the ones determining what's respectable. Buchanan and Sobran probably just were too truthful for what William Buckley felt comfortable with.
BernCar
PS William Buckley on "Firing Line" had been an early introduction to "conservatism" for me. I recall one of the first hints about his loyalty to principle was his excommunication of Mr. Buchanan from respectable society due to supposed anti-semitism. (At the time, I was not aware of Buckley's trashing of Joe Sobran.) Buckley wrote a very long essay in "National Review" with an apparently judicious examination of Buchanan's writing, and relucantly and sadly proclaimed him apostate due to Buchanan's putative bigotry regarding Jews. Thus began my disillusion with Buckley conservatism.