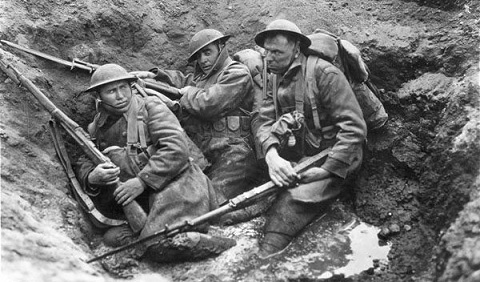 ... one complete century ago, the Great War, as it was called before World War II, was ended by treaty in Paris, France. The fighting ended, and basic terms for surrender were set, but all the details were not laid out and finalized until the notorious Treaty of Versailles was written in January of 1919.

I don't post on Sundays, but it sure IS Sunday in Paris right now, just 5 hours before the 11th hour, and this is surely more timely than one of the biggest Peak Stupidity blog-farts in which I'd posted about the end of the Great War ~ 1/2 year earlier by mistake. The song in that post will be repeated below, an anti-war song that you sure can't argue with.

Back when Americans learned real history and not some dicked-up PC cherry-picking nonsense, we studied Western Civilization through many European wars. I never did get how these European upon European conflicts could get so vicious, bloody, and long-lasting. Were the men on the other side that foreign to men on the one side? Well, no, but the elites determined that this was the way to settle things. The Great War, WWI, was supposed to have been the "war to end all wars" as it was larger in scale than anything seen before, and larger in carnage and deaths. The new machine gun made everything worse and forced a change in tactics from those of previous wars.

Upon looking back from a century down the line, but even a half-century, nobody can seem to come up with any good reason that this war should have been waged at all. Ethnic strife, conflicts over colonies, all blowing up into the big war that the Generals of France and Germany, especially, had already drawn up contingency plans for - couldn't it have been settled locally in places?

Really, when I think of the strife and stupidity of today's world, especially in our country, I think there is more reason around for something like this to happen than there was a century ago, by a long shot. Are we different people, now, not ready or able to fight this kind of conflict? Many are too used to prosperity and will not give that up, even if the result will be akin to slavery to the new system. However, anyone having seen the personal results of real war could not be wishing for anything like it again. This folk/traditional song, The Green Fields of France by the The Furies does a great job describing the sadness of many millions of men, but mostly boys, seeing the end of their lives with such pain, and no chance to experience anything more of life past this Great Bloody War (to end all wars).

Yea!
Moderator
PS: I guess people are the same in some sense, but I think many are too soft to be able to change to what they would need to be in that WWI situation in time, before they did something (maybe not purposefully) suicidal. The preppers write about this sort of thing, but I don't know.

That Peter King video sounds great. One guy at unz (commenter Joe Stalin) linked to a video, almost the last of the series, in which a historian has kept up in real-time + 100 years with the Great War. I wish I'd started watching his youtube videos from 1914 on.
BernCar
PS Re: Beginning of your last paragraph, I wonder about the differences between people of then and us of now. Were they stronger men essentially or just same as us caught up in harder times, different circumstances? They were accustomed to more strenuous everyday life for sure, but I want to believe they looked through the same eyes as us, so to speak. The great war to be sure ended the German, Austro-Hungarian and Ottoman empires and the associated regnant imperial houses, in addition to the Russian monarchy. Britain and France, while holding on to their empires a while longer, suffered national disasters with effects that linger to this day.

I saw a SkyNews clip that Peter King (of Lord of the Rings movies) produced a 90-minute documentary commisioned by the British Imperial War Museum in which, using their actual black-and-white, jerky-motion film clips of WWI scenes, he transformed original film into colorized regular-speed video. I was able to see a few of the resulting scenes somewhere and the effect is spectacular to anyone used to seeing WWI in the old film style. It's absolutely haunting.