Tucker Carlson and the Commies - Part 2


If nothing else, leave out the innocent children. 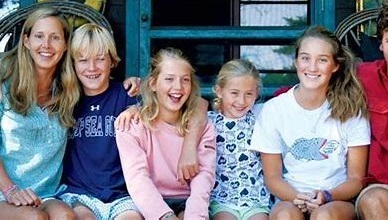 The scrawny-assed thugs that have been harassing and threatening Tucker Carlson's family don't talk about Karl Marx, Lenin, or Trotsky. They don't hand out pamphlets (that takes work and there is no app for that) about the plight of the workers (well, they don't know too many workers). So far they have not picked a color scheme, though black seems to be in for them. Even so, the parallels between the words and actions of America's ctrl-left today to the Communists of century-ago Germany are very interesting. Above all else, there are the pernicious LIES. That part has not changed a bit.

(After seeing that one segment of that Great War history series that I posted (at the bottom a few days back, I wish there were (maybe there ARE?) series like this, going back exactly one century, day-by-day or week-by-week, depending on how busy it was for, say American history, American government*, European history, etc. Would that not be very watchable, assuming a good, enthusiastic, and non-PC narrator, that is?)

"They" don't say "history repeats itself", or at least the "one's" that say "History may not repeat itself, but it sure does rhyme." don't. Let's discuss this rhyming of the current-era American political situation with that of century-ago Germany. We can compare and contrast** the two times and these political factions between then and now. Of course, Peak Stupidity has more information on the here and now than 1920's Germany, but can delve into that history at our leisure, which is why there is youtube.

1) Level of violence - Looking back at the street battles between the Commies and Nazis back closer to 90-95 years ago, of course, the people were armed differently and were mentally-armed differently. Let me mention the latter first. That 70 years of mostly-peaceful (no war on our soil) prosperity has left most Americans very soft compared to those battle-hardened German Freikorps (near bottom) and the Commies, many of them having been involved in violence in the Mother-of-All-Communist-Land USSR very recently. In America, the ctrl-left are usually the even-softer soy-boys, loud/foul-mouthed fat broads, and others who are only safe from getting their asses kicked in a University setting. The right has a lot more to lose, for a number of reasons (more on this) and therefore is prone to backing down.

A century ago in Germany, those vet Freikorps and others from WWI were "well-regulated" in the US-Constitutional sense, but I don't know about the Commies. In the current day, as far as weapons, there is no doubt that the People of the Gun, on the right, are much more familiar with weapons, especially firearms. The left have been loudly tweeting lately about their intentions to arm up, but there's a real problem with that for them, as Peak Stupidity discussed long ago in "Lefties say they are going to start Prepping". See, any kind of activity that requires responsibility, prepping, and getting trained to safely handle and shoot guns, for example, involves rubbing elbows with an assload of deplorables. The habits, personalities, and ways-of-thinking may just rub off on these people, as they try to become harder, and then, they may not be part of the ctrl-left anymore. Hey, that doesn't work! Therefore, for right now, they still are in the bike-lock against the back-of-the-head, and throwing/spraying of various liquids phase.

As far as getting at a man's family, like the crowd below has done, I don't think that kind of behavior would have occurred into much later stages in the violence, if at all. These people are crude, and too cowardly to take on anyone they know will be ready to fight back. 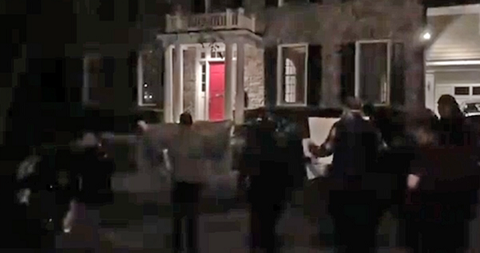 2) The Economy - Again, because of the much greater prosperity seen in modern America, vs. century-ago Germany, the right has a whole lot to lose, and is not yet ready to go all out fighting the ctrl-left. Back in Germany, most especially in 95 yr-ago Germany, the hyperinflation made ordinary living next to impossible. We don't have any of that yet, just your ordinary inflation, though harder economic times ARE coming. The vets and the young German men who wanted none of the society-destroying Commie shit, were quite ready to do battle. There was nothing much to lose for the guys on both sides. Is this why the right dispatched those Commies in a decade or so? Yeah, I'm back-and-forth here, but our young people on the right have made a go at it once in a while - look up the Proud Boys fight against the antifa attackers in New York City and Portland, Oregon (see same link as above). Things will change as the economy gets worse, but also, the modern-left has another big advantage, as the right has a lot to lose for another reason than just better (or any) jobs ...

3) The Establishment - Here again, for century-ago Germany, I don't know as much, though I have read some about the Weimar Republic that existed from an exact century ago (OK - 3 months) to 1933 when the Nazis changed the government. Who were the establishment 90-100 years back? The Commies had taken over Munich at one point (early on, 1919), and the right fought for their own government, and though the Weimar Republic tried to be moderate, with the onerous stipulations from the Treaty of Versailles, things never became quite normal. Even after the hyperinflation slowed down in 1924, during the "golden years' up until the financial crash of 1929, there was much backlash about the Americanized culture being pushed on the people. Conservatives may have felt the same as they do now, but instead of ridiculous tranny bathroom rules, and PC insanity, it was caberets, short hair on women (never a good concept), and serious hard-pore cornography. I really doubt the establishment was what the German people wanted, as later evidenced by their support for the Nazi's even when the Commies were probably no longer a threat. Did the media push all the stupidity, as it does today? I've gotta learn more.

Now, Peak Stupidity has discussed in many posts the long march of the ctrl-left through the American institutions, resulting in the Universities, Lower-Ed Business, Legacy- ("System-"?) Media, and Governments at all level being completely infiltrated at the present time. The "warriors" on the left have lots of help from all these institutions, while anyone taking any violent or even peaceful stand on the right will be vilified by all of them. We've written about the Anarcho-Tyranny at Charlottesville where the simple act of gathering to speak about keeping statues of Southern heritage was considered an act of violence, while the attackers were the "protesters". That was the Lyin' Press establishment, but the Government establishment got their share of Anarch-Tyrannical beatdowns later on in the court of law (or lack thereof, depending on what side you are on). This is just another way in which the right has so much more to lose. The system will spend lots of effort to put you away and out of the fight, if you get just a little bit out of line on the right. The left is left free to kick ass, as much as the soy-boys and fat broads can do that sort of thing.

4) Escalation - The Commie left does not settle for any compromises, like, say, the tremendous Socialist Welfare State built by the American Feral Government over the last half-century. That's never good enough. They want full control of people's way of living.

The method in century-ago Germany was different, in that, due to the turbulent economic times, and bitterness over the Great War and its resulting perhaps-unfair reparations, the Commies picked the place and time, just as in Russia the previous full decade, to make their violent moves. That would never have worked in the whole previous century in America. It's not that some didn't try, but our steadfast, Constitution-loving people, even quite a few in government, put the kibosh on that crap as it came up. Nope, the method here was to slowly infiltrate the institutions, a life-long (though probably not planned-out) process for many on the left. Whether planned or not, it's come to fruition here anyway. The people are in place to support increasing levels of violence from the antifa and other groups that simply want to destroy society.

They will get resisted, at some point. We should hope that the resistance doesn't morph into the same form as it did in, yeah, NAZI Germany. That brings us to:


--- THE LIES ---
Now, this is one thing that the Commies of century-ago Germany and today's ctrl-left in America have in common. There are the same pernicious outright lies that are so damn ridiculous that it's hard to even argue with the people spouting them. The premises are so wrong that by the time one gets done trying to correct a few of them, bam, there goes the bike lock against the head. The antifa say that President Trump is like a Nazi, but yet your average Nazi could SURELY get a fence of some sort built to keep foreigners from walking across the border, could he not? If he were a Nazi, couldn't he get Nancy Pelosi shipped off to somewhere, anywhere? The point for the left is to turn the tables around via these lies to justify beating the crap out of people, and eventually worse (per their thoughts, that escape out as tweets). Yeah, we're the Nazis, so they have a right to beat and kill. If we try to take a stand in defense, that just proves it.

Back to Tucker Carlson, he shouldn't have any right to free speech, the ctrl-left says, because he's a Nazi, one of the people that will try to take away rights, such as free speech for example. OK, maybe things could have not quite been this much of a shit-show of Peak Stupidity in Weimar Germany 100 years back. If so, they'd have been too cultured to use that term anyway. It'd have been more of a Scheiße-Sturm, and I wonder if there was a pamphlet-writer named Tücker Karlson getting the same treatment by the usual crowd. Does history rhyme, or what?


*Maybe this one could just be made monthly, as during Warren G. Harding's time, and even moreso, the time during the presidency of "Silent Calvin" Coolidge, not much went on in government daily. What a country it was!!

** That was what we did in school back in the day, we wrote an essay to "compare and contrast". Nowadays, what's the deal? Does the teacher just ask the students to "write a politically correct essay to fit our narrative, with as little cutting and pasting as possible. Now, children, please hand in your "CTRL", "C", and "V" keys, please." Oh wait, that joke's already obsolete ...

Moderator
PS: Sorry for the very late reply, Mr. Pendleton. I hope you are still reading. I don't know how things will turn out, but it can't help but be very nasty at this point. The ctrl-left has made it this way by never compromising (thought that's not what we need anyway), and ratcheting up the name-calling and violence. History is repeating before yours and my eyes, Wyatt.
Wyatt Pendleton
PS Why? According to the narrative of the Left the Honky's and rich running the country along with their White folk confederates are all participants against the adults/kids of the Left who are being butchered, impoverished etc. This is a Culture War on its way to a Civil War and wither or not you agree that's the case, kids get slaughtered in wars an that's just the way it is. TBH I am expecting millions to die once this gets underway and when it burns itself out America will be broken into 3 or 4 territories marked my massive segregation.