Chinese vs. American infrastructure - "From Scratch" vs. Repair modes

In this corner, the Challenger, gleaming new Chinese roadways: 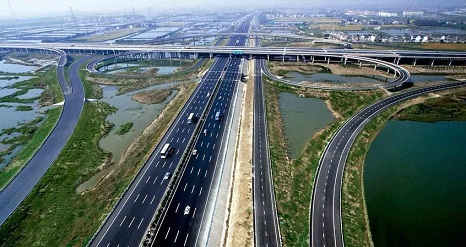 And it this corner, work goes on fixing this old subway in America: 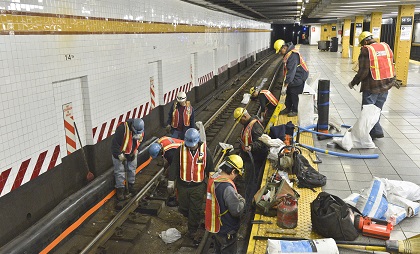 After posting here about the amazing build-out of infrastructure in China going on, and lately reading the two posts by pundit Fred Reed about what he observed in his two weeks there (Part 1 and Part 2), there's a major point to be made when comparing all this to the same structures/systems in America. That is, America has been mostly built-out for a while, one could probably say from 70-odd years ago (after WWII) to the 1980's sometime. The period is very arguable, I realize, and would depend if we are talking trains, roads, skyscrapers, or what.

In China, nothing of consequence** was built until the mid-1980's after Chairman Deng's reforms of (basically easing way up on) Communism took hold. Before that, it didn't matter what the hell the Central Committee wanted, and how the money would be raised, THERE WAS NO MONEY. They could barely survive back then, much less build skyscrapers. Now, all that money they've been collecting from selling us the Cheap China-made Crap is there for the spending - 1000s of miles of new roadway (each year, I would bet), a high-speed rail network (in way < 10 years!), and dozens of cities that all look like New York, but with better lighting (the Chinese are nothing if not connoisseur of lighting everything the hell up). Why can't we in America keep up with this type of thing, one may say, if keeping up with the Jones Laos is your thing? I don't personally thing that the fancy cites are what it takes to be a great country, but your infrastructure can't be slowly collapsing either.

Besides the fact that possibly our governments are mostly broke already, there is another big factor that makes it hard to keep up with the Laos: Starting from scratch is SO MUCH EASIER than keeping the old stuff running. This is true for roads, subways, sewer systems, and the whole gamut that defines an infrastructure that befits a decent civilization.

America was a young country once. It may have not have been building the SAME gleaming new stuff, but some of it was amazing, built 1/2 to a whole CENTURY before what the Chinese are building now. Some of it does the same function after 114 years, no China-made crap this is: 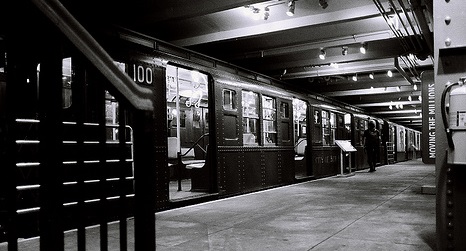 (Black & white pictures were all you got back in the NYC subway's time of glory.)

However, face it, we get old, and stuff gets old. The constant repairs going on in New York city have been a fact of life for a century. It's so much more difficult to divert traffic and dig up and under the road for a week with expensive union labor than it is to build a city street anew. In other cities I've seen new techniques to knock out old leaking concrete sewer lines with a cool machine, using another machine to run a plastic pipe through. Cool! However, each house still had to have the street dug up in front for the new connection, then filled back in then repaved with the usual imperfect surface remaining. It's the same problem for repairing rail lines that are old*** vs laying down new track with a machine that lays down sections at a time of 2 rails and ties together in short order.

If you don't pay attention this stuff, then I hope you are familiar with old houses. Whether it's your money or your time and sweat, everything is much more hassle, if not impossible, to make like new. "Well, I can knock out this wall, but the wiring's got to be re-routed, and there are pipes in the way." "To run the new wires to replace what the squirrels have been eating, we've got to pull it all, and we're going to run into cross pieces requiring knocking out part of the walls." "I'd like to put new flooring in, but I'm gonna see how bad the sub-flooring is, and I know I'm not gonna like what I see. That'll require tearing this whole room apart." ... etc., on and on it goes. How about "Let's just burn this thing to the ground - I've had enough!"

The same can be said for NY City (especially the "burning to the ground" part, though that's a job that Americans just won't do - we'll need some immigrants for that ...), along with all that's been built and finished 100 to 25 years ago all over America.

This is not to detract from the amazing projects that the Chinese have been building all over:


This is just one in THOUSANDS, maybe TENS of THOUSAND of the like: 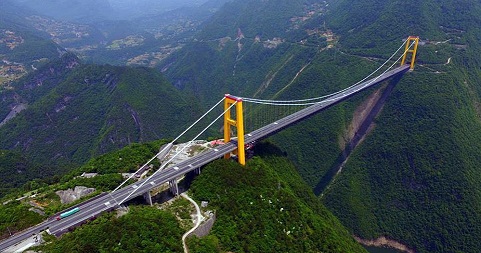 It's rough terrain over most of that country. We have our mountains too, but much of America can be paved over with drainage created, with just the standard road-crossing bridges for new roadways. I give the Chinese a lot of credit and awe over this stuff. However, over here, we are in repair mode, and you can't always just tear down and build anew. We're in a really tough state to try to keep up with the Lao's, and it doesn't help that we're beyond broke!

* I'll give Mr. Reed credit, as I also did here, that these 2 posts were not Anti-American or Anti-Americans, as his stuff has been lately. It was just a travelog from someone writing the way a reporter SHOULD (yes, highly irregular, I know!)

*** Thanks to the wonderful Mighty Machines videos from mid-'90's to late '00's Canadian TV, I've seen sets of machines that will knock out old ties, punch passageways, put new ones in, and set in the spikes. Still, it's way more trouble than with new stuff.
Moderator
PS: That's a valid point indeed, when you separate the economics from the politics. Our Feral Gov't tied in economics with politics once the FED was created and later on, the gold standard was dropped. Once this easy money was available, the middlemen and completely unproductive F.I.R.E. industries got bigger and bigger. The "F" part, Finance is a big part of our economy, yet they create NOT A DAMN THING, just trade around money, create "funds" of different sorts, and mooch off of the earned wealth of others.

I'm not sure why you have the example of Switzerland, though Mr. Drake. It's a place that does WORK (for now, but they aren't as stupid in letting the world in, so far). However, it's an expensive place, but they can live off the interest of all those funds from the bankers and rich elites around the world. Switzerland has neither the room nor the inclination to "grow their economy", but maybe that's what you meant. They are doing alright. The US economic heavyweights all say that unless we grow that GDP (which doesn't always mean squat for the workingman), our economy is not doing well. That IS true for all the Finance industry. They need the money pot to keep growing and growing. Without manufacturing might, there's nothing underneath to support them, though.
James M Dakin
PS-another factor in comparing the two systems is Energy and Financing. Don't ever underestimate the power of a private owned central bank to drain almost all of the productivity out of a system. That is ours. Now look at systems that keep the bankers out. Nazi Germany, Russia and China. That did a lot more with a lot less ( this de-couples politics from economics ) with all the normal corruption but NOT institutionalized in the banks favor. I see your point in new verses repaired, but does hold up when looking at places such as long term steady systems in Europe such as Switzerland? Just a thought.
Moderator
PS: I wasn't sure if you first meant that the far tower was in bending (shouldn't ever be, right?). I am no CE though - don't know about you, but we all try to remain as anon as possible nowadays.

If you have the means, by all means (pun not intended), you should get a visa ($>250 and you need a week or two for that) and get a ticket and visit China for as long as Fred Reed did, or longer. It's a fairly inexpensive place to stay in.
Dtbb
PS
I am wrong. I see the anchor cables on the tunnel side now.
Dtbb
PS
Cool bridge. Must be one continuos cable supporting it.