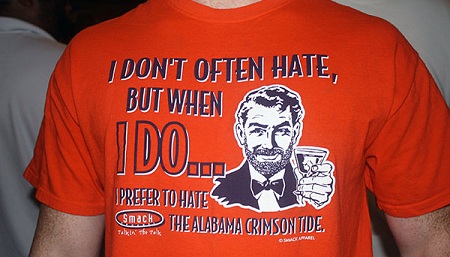 It's OK, the bread and circuses are necessary to keep the American population contented, or at least stable and un-organized. The globalist elites need it this way. As a quick addition to the Peak Stupidity post on Sportsball last week, this post was inspired by a headline I'd read during the big college football weekend around Thanksgiving, something about "Alabama-Auburn* rivalry splits homes and relationships".

The article was lighthearted, it turns out, as most people are sane enough not to take a college football rivalry as anything more than entertainment. It all sells very well, though, and lots more than just the shirts, as above. In the previous post, I mentioned the big money involved in spectator sportsball, especially 80,000-attendee college football games (the pros likely easily make much more from their TV rights and merchandising). OK, besides the big money, which people obviously have PLENTY EXTRA of, to spend on this sort of thing, yeah, it's fun for people.

The talk of splitting homes and relationships is just too close to the words one reads in the history of the American War Between the States (or "War of Northern Aggression" for you history, buffs. The reason lots don't label this it as a "civil war" is that it was about a whole group of (formerly) sovereign States making an effort to leave the Union of States. A civil war is one in which the divisions are WITHIN every region (which, worryingly, is what we have today). Still, there are many stories of brothers fighting on different sides, especially in the border states and then in places like Missouri and Kansas where there weren't set-piece battles but more guerilla warfare that was very localized.

The kind of wording used for the Thanksgiving football game rivalries reminds me of this history. I don't expect troops from Tusceloosa to lay seige to Auburn and seize the War Eagle, though those things (the latter part, anyway) used to be done in fun. No, but this talk is just part of the distraction effort, in my opinion. It's a way to let guys blow off steam and feel manly about something, as if it were a war. "What's the problem?", one might say, as that sure IS BETTER than the real thing. It's just that people are being softened up, and are not ready to fight the small battles, say against the Antifa Commies and others, that really have a violent agenda in store for us. People are too distracted by the sportsball to have energy left to fight those that really are intent on harm. Maybe it'll change soon. The goings on with Tommy Robinson in the UK (of all places) are a good sign in this regard.

Still, the more I think about the picture above, and a multi-decade now continual war on Americans' heritage that has pretty much been lost without a fight, the more I wonder about people. You go yelling and screaming and sometimes drunkenly fighting about which of the squad of football thugs is YOUR TEAM and kicks THEIR TEAM'S ass. Yet the Rebel flag has been let to be taken down from almost anywhere in public, and you've got University administrators telling you that you have to call Latinos "Latinx's" and other made up asinine terms. There's loads of ctrl-left Cultural-Revolution type aggression being just allowed to go on, but NO, SIR, do not use the name War Eagle in vain or dis Muh Crimson Tide**!


* Not exactly - names have been changed to protect the innocent, if any.

** Is that really a good name for a football team anyway, or would it be better as a name for a new heavy-duty feminine product? Don't get on my case, Alabama sportsball fans, I'm just sayin...

Moderator
PS: That'd been a good one. I have the "Southern Rock" topic key on here, in case you haven't found it yet!
Dtbb
PS
A New Year's Eve concert I went to about 1980 was the Outlaws, Molly Hatchet and 38 Special.Thought it might interest you.
Mod
PS: I guess there's a gator in the bushes, and he's calling her name, sayin' "come on girl, better make it back home again ..." That part of Florida is one of my favorite parts of the country, over near Live Oak, Suwannee, Ocala and thereabouts.

Yeah, it IS mostly just joking around, but the wasted effort by some of the people goes far beyond, well, what one's time should be spent on, just IMO. I guess it's just not my thing, Dtbb.
Dtbb
PS
My parents met at Alabama and my Dad's sisters went one to Alabama and one to Auburn. Never really noticed much rivalry among all the cousins except for joking around. My aunt(the last one still alive) now lives in Gainesville and is a huge Gators fan.