Just to get off the subject right away this time, the post title is taken from the wonderful 1988 movie Full Moon in Blue Water, with Gene Hackman and the beautiful Teri Garr. I don't know what it is about it, but this one gets a Peak Stupidity two thumbs up.

Now, here's the moonbeam still "serving" the people of California a crock of lefty BS in Sacramento: 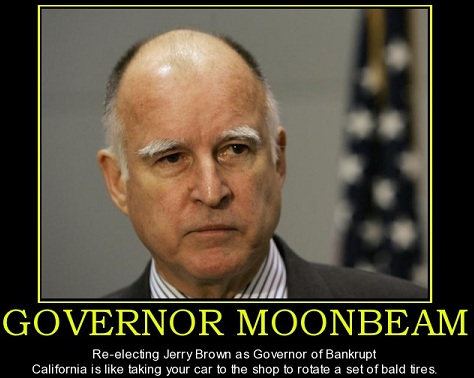 California was called "the land of fruits and nuts" even back in its Paradise days, and who knows what they call it now? What do you call a people who have kept Jerry Brown in and out of office since 1975, as he bounced from Governor to Mayor of Oakland to Attorney General, then back to Governor in 2010 and ever since. In some ways, per the wiki page on him, Brown was a pretty decent guy, being more of a fiscal conservative than Ronald Reagan, pushing for a US Balanced Budget Constitutional Amendment, and presiding over a $5 Billion budget surplus - yes that was long, long ago! Spell-check was under the quite-reasonable impression that this blogger was drunk and kept trying to change this to deficit. Surpluses in California?! Hahahaa, you're one of those nuts, aren't you? Hey, I'm no fruit, so, you know, there's that.

However, Jerry "Moonbeam" Brown was down with the usual causes that are documented here as the various and sundry flavors, if you will, of stupidity. The environmentalism is one, which, originating as a very good cause, largely out of California, morphed into pure stupidity by the 90's or 00's. Moonbeam was at the forefront of all of it. The latest major bout of out-of-control environmental stupidity is the Global Climate DisruptionTM, of course, as well-documented here.

A Lyin Press (warning) article from a week back features another piece of stupid out of this guy, with Jerry Brown: Climate change challenges as serious as those faced in World War II. Yeah, that's the ticket. Those extra hurricanes, as wrongly-predicted by those beautiful climate models, are like Nazi U-boats, sinking, well, condos and 2nd homes, and stuff. (I guess and Tsunamis could be seen as the modern-day equivalent of the Japanese Imperial Navy.) Who would be the Hitler and the Waffen SS in all this? I believe it is you the SUV driver, and you the user of propane and propane accessories. From the article:

In an interview for Sunday's "Meet the Press," the outgoing governor called on President Donald Trump to take the lead in addressing the issue. "Instead of worrying about tariffs, I'd like to see the president and the Congress invest tens of billions in renewable energy, in more-efficient batteries, to get us off fossil fuel as quickly as we can," Brown said.

Oh, I see, all about the money again. Yes, California needs more of our money, with that big surplus deficit surplus deficit SURPLUS [dammit, spell-check, we're tryin' to be sarcastic here, get it!? - Editor] Do you want to make another investment, Mr. US taxpayer. You can't lose - it'll be like that nice $80,000,000,000 choo-choo train!

"I would point to the fact that it took Roosevelt many, many years to get America willing to go into World War II and fight the Nazis. Well, we have an enemy, though different, but perhaps, very much devastating in a similar way.

Yes, a 1 C rise in the average temperature compared is like the blitzkrieg of Poland and France and bombing of Pearl Harbor. Devastating! Speaking of this, it's kind of a slip that Governor Brown says it took Roosevelt "many, many years" to get Americans to want to fight overseas. Hmmm, but I thought we were neutral until Pearl Harbor? His statement kind of jives with many historians' opinions that Roosevelt dragged us into war, and who knows how much he knew about an attack coming.

No, America ramped up its military forces and transition to economic wartime footing over only a couple of years. Could we not do the same, if we actually saw a WORKING! MATHEMATICAL! MODEL! OF! THE! ENTIRE! EARTH'S! CLIMATE!? Why not give it a rest, Moonbeam, until we have a serious clue about causes of climate differences over time over the whole world?

President Trump has repeatedly downplayed the importance of addressing climate change during his presidency.

Last month, he brushed aside a federal climate report that warned of a “cascading effect” from climate change that could hurt both the planet and the economy, telling reporters “I don’t believe it.”

Last year, he pulled America out of the international Paris Agreement meant to align the world’s nations toward reducing emissions and curbing the effects of climate change.

And his administration has also rolled back a handful of Obama-era environmental regulations aimed at reducing the impact of climate change.

Donald, I forgive your lack of any success on the immigration invasion for the evening, as this part just warms my heart. As the older Californians probably still say "Right on, Mr. Trump!"

Let's leave along the left coast for a bit, and note what the ex-Mayor of NY City has to say. No fruit or nut he, but just a gun-grabbing, soda-stealing tyrant, Mr. Bloomberg chimes in, in the article, thusly:

"It would be a lot more helpful, if we had a climate champion, rather than a climate denier, in the White House," Bloomberg said.

"You know, I've always thought, Trump has a right to his opinions. But he doesn't have a right to his own facts. And the truth of the matter is this country and this world is in trouble.

"This world is in trouble." Yeah, come to think of it, with people like you and the Moonbeam, that is indeed a fact.

What about that comparison of Global Climate DisruptionTM to WWII (the big one) again? How'd it end? Oh yeah, does that mean we're gonna have to bring out the nukes to finish off these imperial Kamikaze Carbon Dioxide emissions?